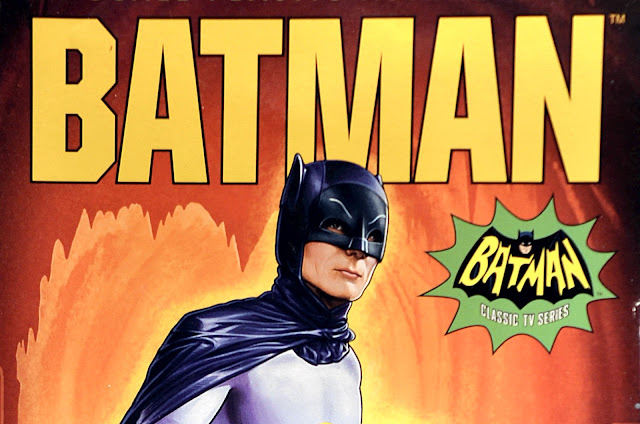 Mat Irvine: Even with reboot movies that feature – currently – five actors reprising the role, many viewers reckon that Adam West (1928-2017) will always be the Batman. And this kit is one of a Moebius Models series featuring other Batman figures.

Here’s what Moebius has to say of the kit: “…For the first time ever, Moebius Models offers a highly detailed styrene kit of the Caped Crusader based on Batman: The Classic TV Series!

“…FIRST IN A SERIES OF SEVEN KITS; FIT THE BASES TOGETHER TO CREATE A COMPLETE ENSEMBLE SCENE!”

It’s not a new kit, dating from 2014, but it’s still worth a good look. Made to 1:8 scale, arguably the major scale for figures, Batman is moulded in a light blue plastic, is easy to construct, and fits on a base that is designed to fit together with other Moebius character figures.

Like other simple kits – this one has just 29 components – the secret of success lies not so much with the build, as the quality of the fit and finish. It’s best to use acrylic paints, though as ever, don’t forget to wash all parts before painting, so that the paint adheres properly. 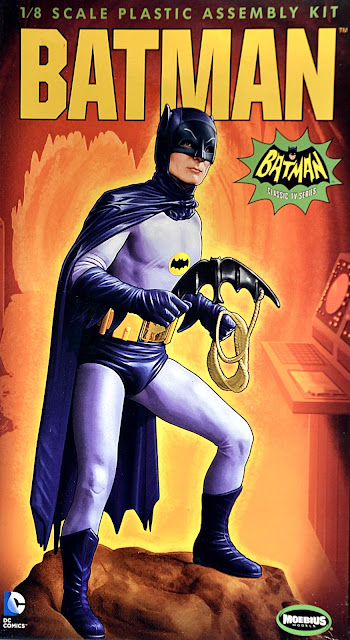 The box base (below) features extra details, including a fully-assembled and painted Batman figure. 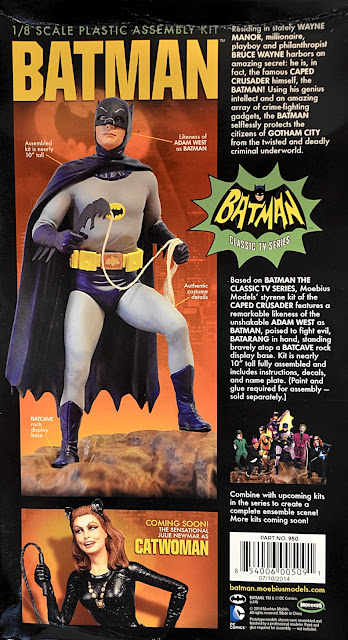 Instruction leaflet (below) and a well-packed box. 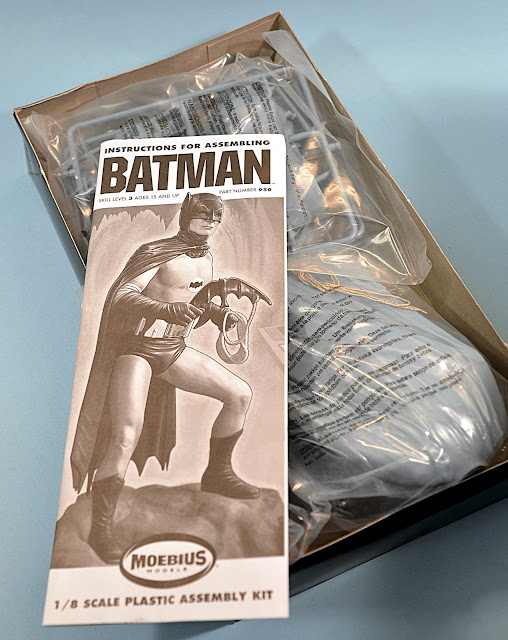 Parts layout (below) shows the non-plastic Batman logo stickers and decals, and a small coil of rope for the Batarang. 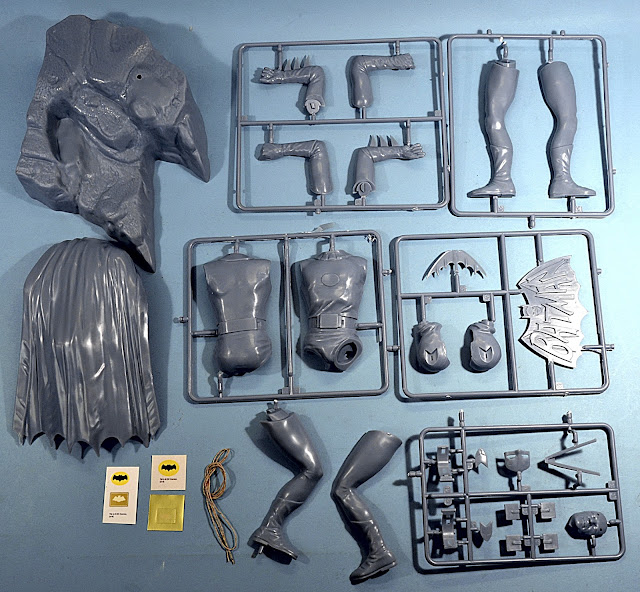 Assembled and finished figures (below) on the Moebius stand at Chicago iHobby Expo. 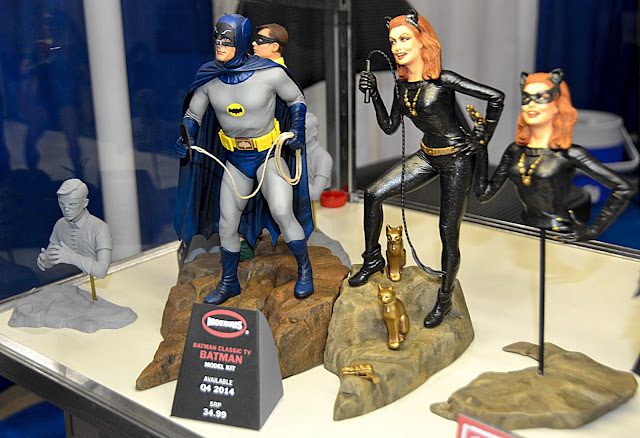 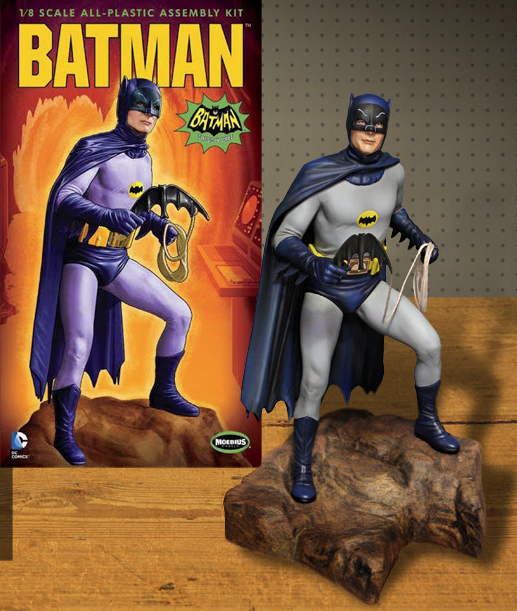 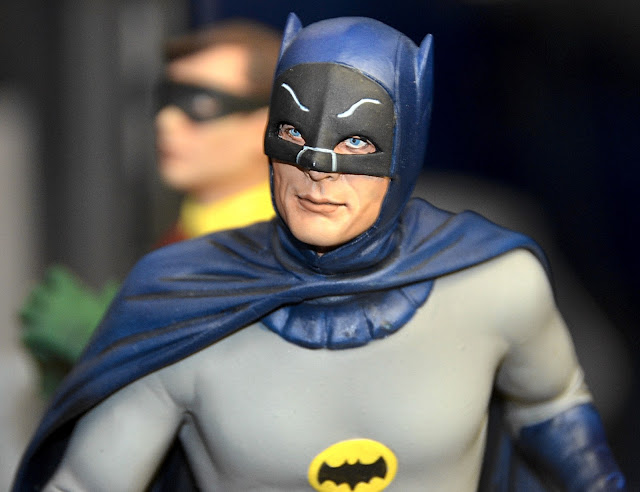 Other Batman figures (below) released by Moebius include Catwoman, the Penguin, and Robin. The Riddler is also available. 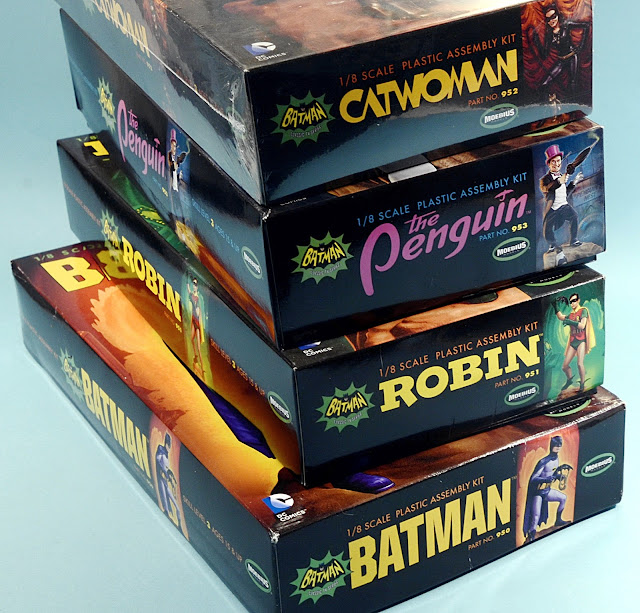 Moebius advertising poster (below). Note that Adam West is the only actor to be pictured both in and out of costume. 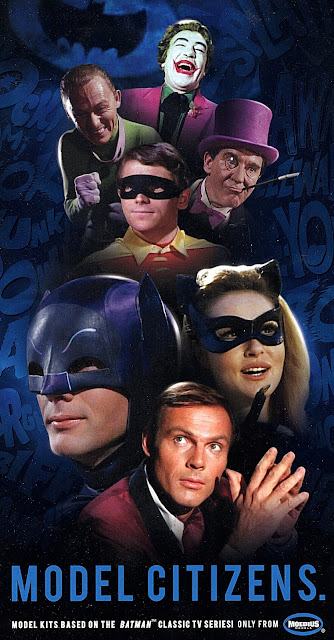 The complete figure collection (below), as pictured on the Batman box base. 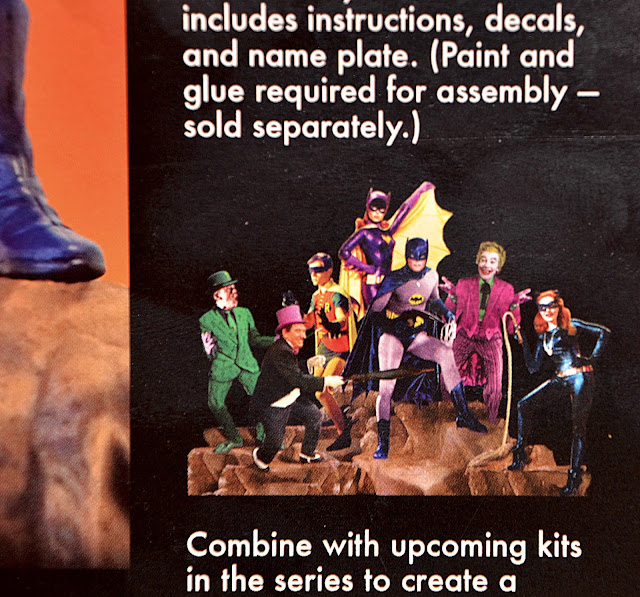 About Adam West
Although attempting to return to ‘serious acting’ after the TV series finished in 1968, Adam West could never shake off the Batman image. Eventually he came to embrace it, and re-created the role with Burt Ward, in at least two Simpsons episodes, playing their star characters.

Later, West appeared as himself in an episode of The Big Bang Theory, mostly worrying who would be able to drive him home. In recent years, he voiced a parody of himself, playing Mayor Adam West in Family Guy. Ironically he did this for 14 years, far longer than the 1966-68 run of the original Batman series.

About his relationship with TV co-star Burt Ward, who played boy wonder Robin, West said “Burt fell victim to making up stories to sell books. But in a way it was flattering, because he made me sound like King Kong.” West also reckoned that he played Batman “for laughs, but in order to do (that), one had to never think it was funny. You just had to pull on that cowl and believe that no one would recognize you.”

Thanks to Moebius Models for the review kit, and click here to visit the site.