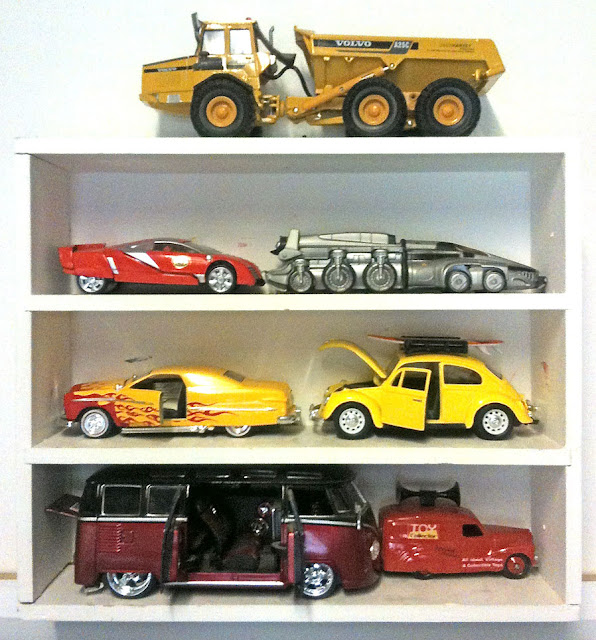 
David Jefferis: When we’d parted with our pocket money, off to our homes we’d go, aiming to vote for the best-made model a few days later. Once homework and household chores were done, out came the cement, craft knife, and other tools needed to assemble that object of desire as neatly as possible. 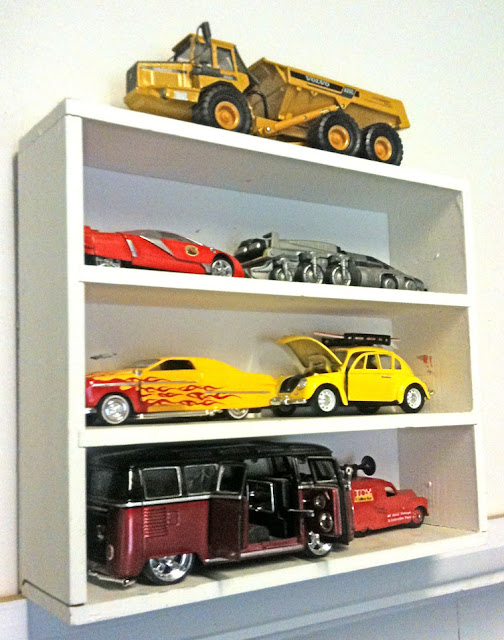 Once it was assembled and painted, I’d proudly place my latest finished model on the display shelf. And that’s when the trouble started, because within a week, that shelf needed dusting. And dust had not only collected on the shelf, but also on delicate model parts, such as antennas, pitot tubes, canopies, guns, and aerials. I won’t go into the torment of seeing the damage resulting from my mother’s Speedy Gonzales dusting sessions.

The problem was addressed eventually by the installation of a large multi-shelf corner cupboard. My models were effectively invisible most of the time, as the cupboard did not have glass doors. But at least they were protected, and it was easy to keep house-proud parental hands away. So the problem was mostly solved.

In the 21st century, dust remains an enemy for exposed miniatures, so here are some suggestions for keeping your collection pristine, with an emphasis on speed and cheapness. First, remember to keep those wooden bottle-boxes you may have on special occasions, especially at Christmas. The shelf unit in the header pic was actually a container for three bottles of port.

Repurposing such items as useful display units is a fairly easy job. First, I remove any lining or string, give the box a rub with fine glasspaper, then spray all over with suitable paint. White aerosol primer gives a clean finish, looks good, and sets off colourful models particularly well. 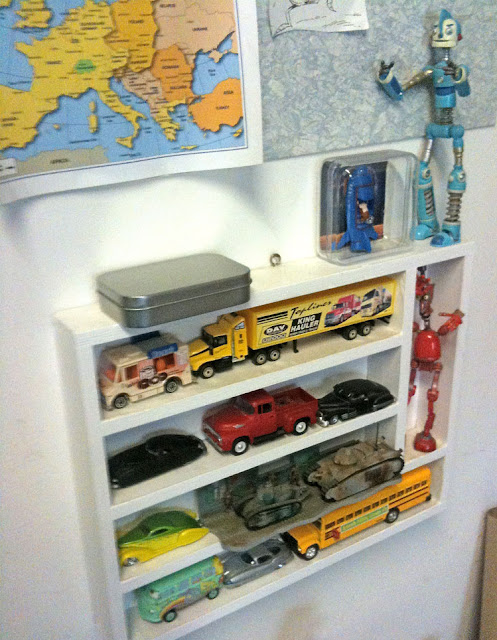 The great thing about small storage units like the ones shown here is that you can put one up almost anywhere, which may be over a door, in a corner, or on a wall. If there’s some space, you can use it, and normally the only fixing needed is a small nail or screw. There’s no glass front, but very little dust or dirt seems to collect in these mini-shelf zones.

Another idea is to use the containers sometimes used for storing chocolates. For example, Ferrero Rocher is a brand which tastes good, and often comes in a transparent plastic box. The pyramid shown (below) originally held an Easter chocolate collection. After the chocs were gone, I used the pyramid to park a 1:43 scale racing truck and custom Mini on a black square of card. I then added the racetrack picture behind to supply some atmosphere. 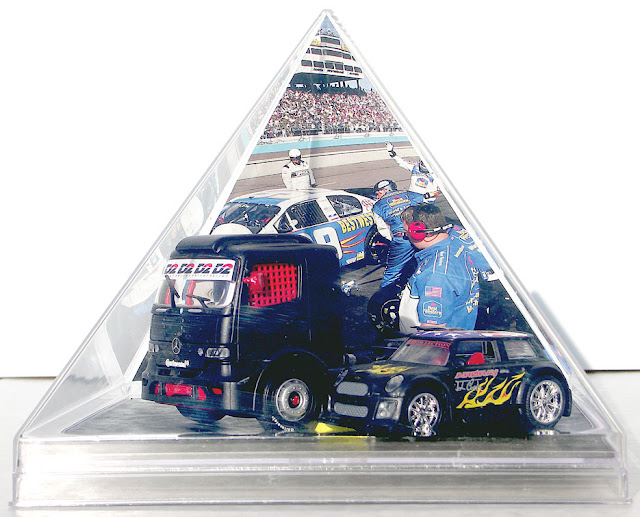 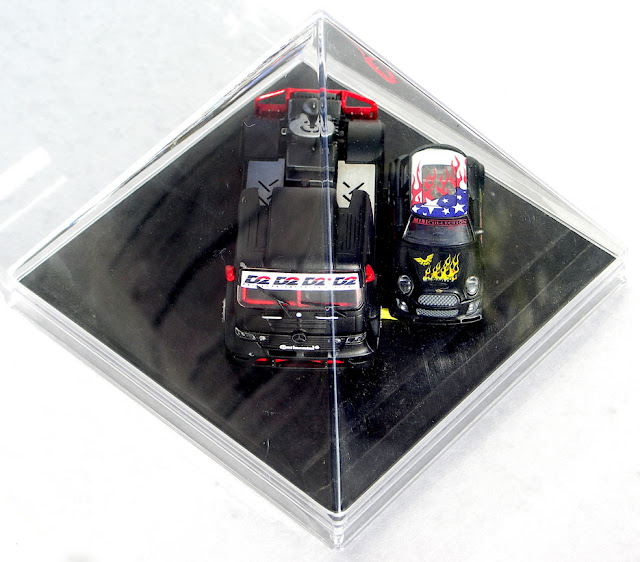 How about really small items? I have quite a few concept-car diecasts in my collection, many of them Hot Wheels made to 1:64 scale. They are neat vehicles in their own right, and often represent unique machines which are not modelled elsewhere. The example shown (below) is the Fast Fuse 1960s-era design, which crossed streamlining and fins with an exposed hot rod-style engine. Very nice too, and I found a small tin that previously contained tiny mints for it. This was just the right size to use as a ‘mystery box’ for inquisitive visitors to inspect and open. I added a black silk lining, to make the interior somewhat special, and to protect the car’s paint finish.

I needed to get rid of a particularly sticky label on the box lid before I could use it for the car. My normal routine for this job is to get rid of the paper part of the label by soaking in water. Removing any remaining adhesive is often more difficult, as a high-tack compound may have been used, to help defeat shoplifters.

The best solution I have found is to melt as much adhesive as possible with hot water (don’t scald yourself) then carefully clean off the residue with a paper wipe soaked in lighter fluid, a product that comes in useful for all sorts of minor cleaning jobs. 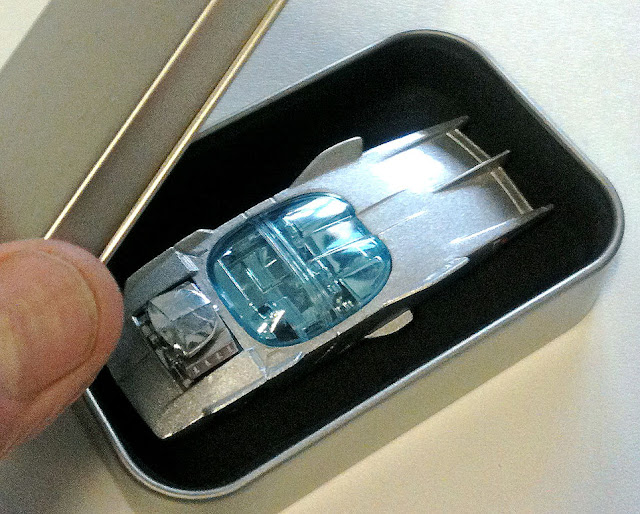 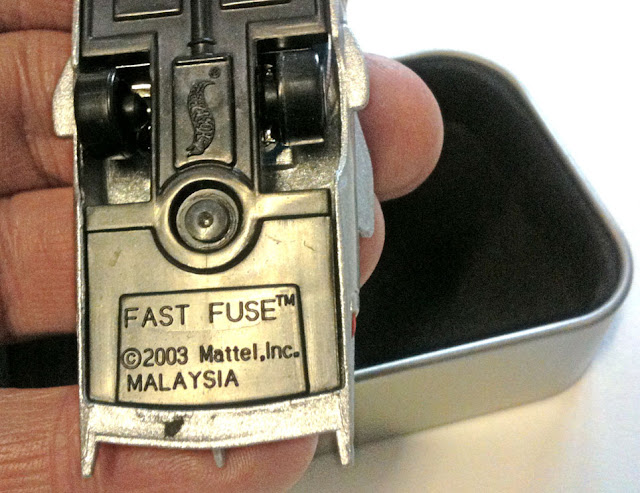