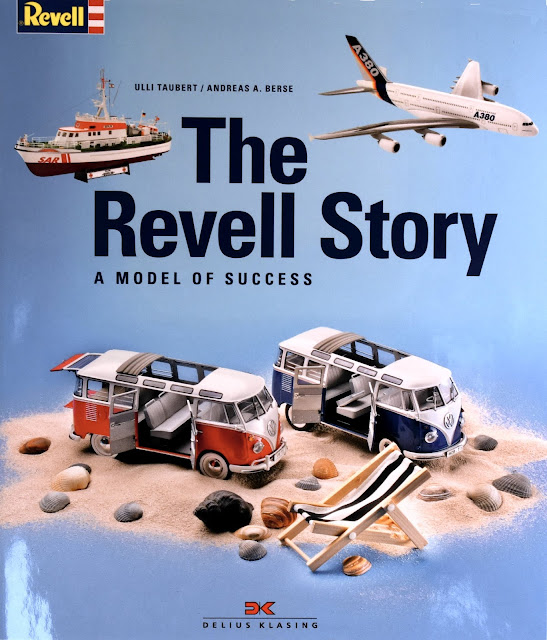 
Mat Irvine: Books on modelling and model companies are not uncommon, but the vast majority are written by enthusiasts, rather than by people who work in the business.

However The Revell Story is an exception in that one of the authors, Ulli Taubert, was for many years Production Manager at Revell-Germany, so has a vast amount of insider knowledge. Taubert's co-author, Andreas Berse, is editor of the German magazine Modell Fahrzeug (Model Vehicle).

The book acknowledges early on that there are other books on Revell, though emphasises that this one concentrates primarily on Revell-Germany, not the original Revell Inc, or for that matter, the other major European division, Revell GB.

The Revell Story takes a primarily chronological approach, using each year of Revell-Germany’s existence, from 1956 to 2018, with mostly double-page spreads devoted to each year. Admittedly in the early years, most of the content derives from Revell Inc, at that time based in Venice, California, with, for 1956, prominence given to the New York Harbor Tug kit. For 1959, the stars are the Westinghouse Power Station and the Moonship, which was the top stage of the XSL-01 Rocket Ship. There were Revell-Germany (though of course it was still ‘Revell-West Germany’ at that time) catalogues by then, so these illustrate each year, with a small picture upper left.

It wasn’t really until the 1970s that the German aspect started to take over, with specific kits of the Lockheed Constellation in Lufthansa markings, and the start of long runs of Volkswagen, Porsche and BMW car kits. By the 1980s there were more home-grown kits of special Germany machinery, such as the Mercedes-Benz Unimog in various forms, and the giant eight-wheel Rosenbauer Simba airport fire tender. The pages also include the  diecast-metal range introduced in the 1990s, which featured subjects like the 1:18 scale BMW Isetta bubble car.

Besides the yearly spreads, The Revell Story has chapters on individual subjects. At the beginning there is the notorious "We are giving away military secrets to the enemy” with the USS Nautilus, (though there was actually more prominence given in US newspapers to the Renwal Polaris submarine kit). Also, there are early designs for what was eventually revealed as the F-117A Nighthawk stealth fighter.

Other spreads in the book offer information on how a kit was designed before CAD-CAM, and how injection moulding works. Featured personalities include the designer Mario Falconi, an Italian who started at Monogram in Illinois. Trabant cars kits are included, as is the continuing phenomenon of Star Wars, for which Revell now has most of the licenses. There are details of how the Revell logo has changed over the years, and how the name originated in the first place, even if details of this are under some dispute.

Oddly perhaps, a whole double spread is given over to the Revell pop-music kit of Beatle figures. Never reissued because of licensing problems (though this didn’t stop Polar Lights making Yellow Submarine), the tooling still exists, and Revell would love to reissue the kit if it could find a way. 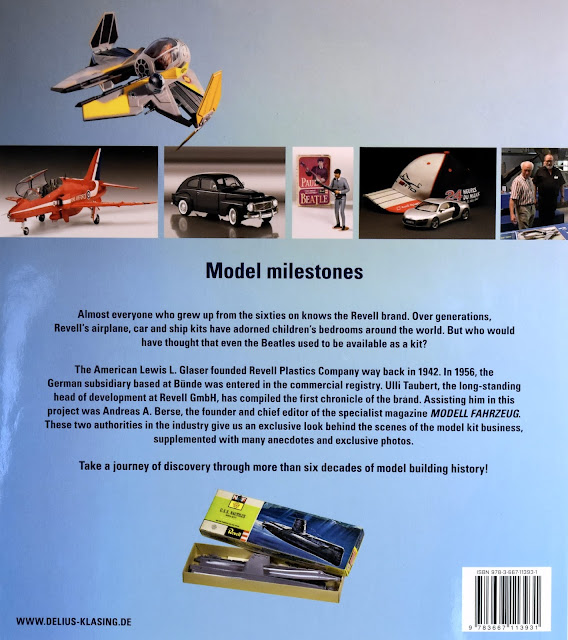 Contents page (below). The ‘years’ make up the bulk of pages, though there are a number of individual chapters 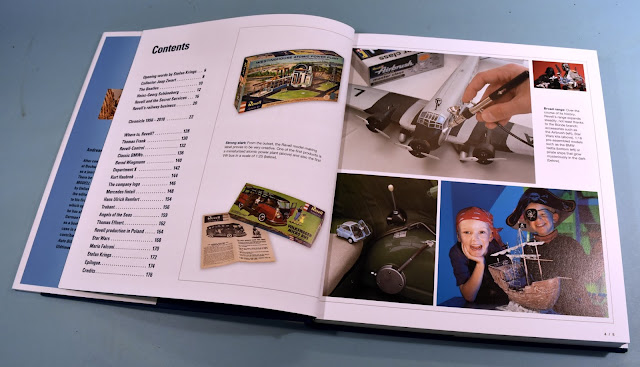 The spread celebrating The Beatles (below). The large photo omits to point out that the Revell Ringo plays just a snare drum. The drum kit here is actually from Aoshima. It didn’t come with Ringo, but was obviously intended to be used by him. 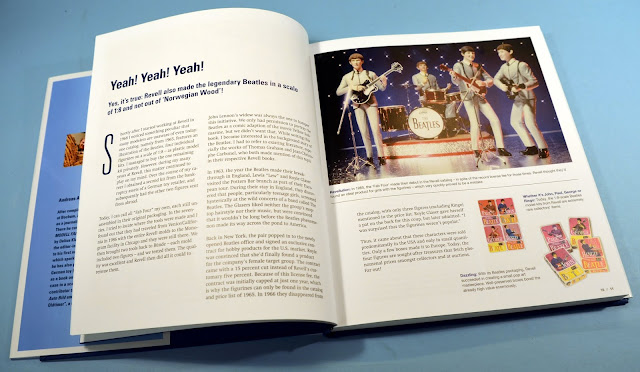 Highly classified kits (below), a chapter that deals with submarines and stealth fighters. 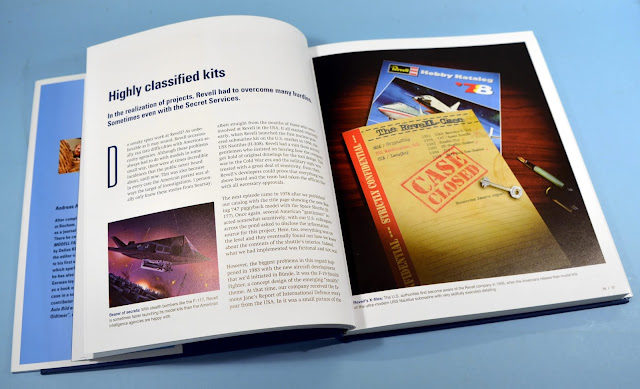 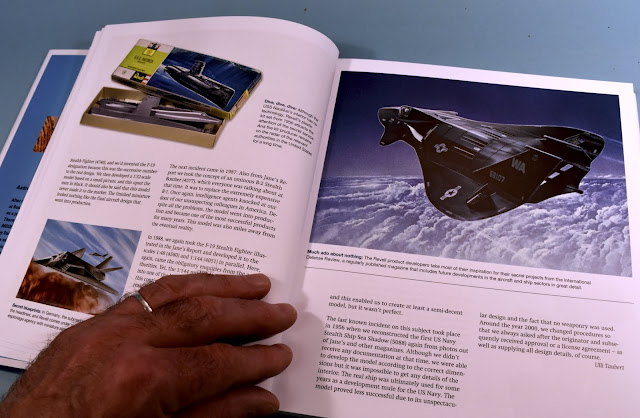 Early years (below) such as 1959, were all Revell Inc kits, even the VW Microbus. 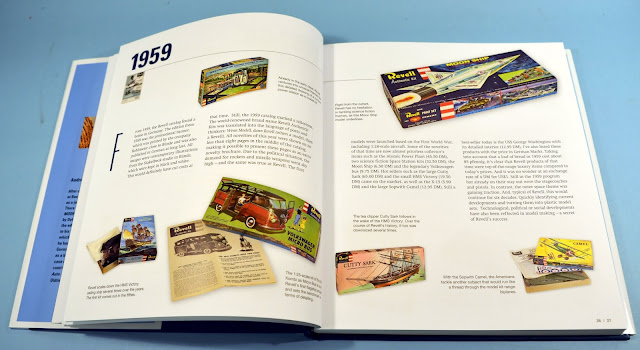 By 1979 (below) kit subjects were getting somewhat more international. 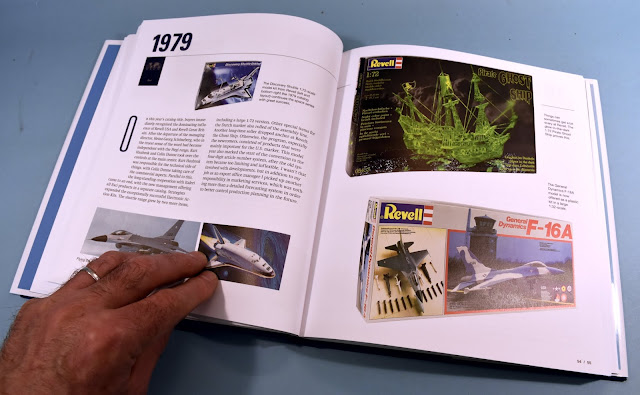