1:25 SCALE JEEP vs GIANT GODZILLA IN 'INVASION OF ASTRO-MONSTER' 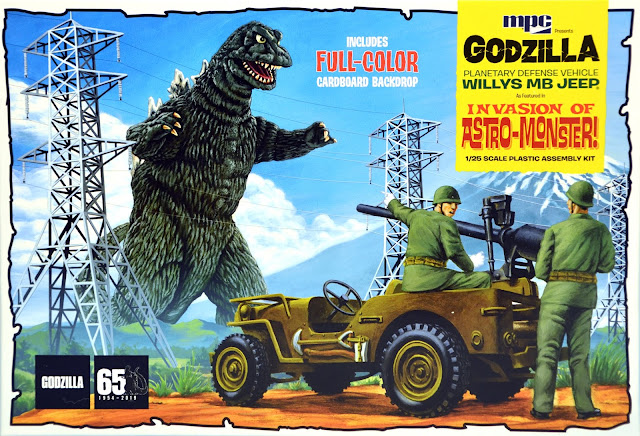 IF YOU LOOK HARD enough, you can usually find an interesting anniversary. And in 2019, Round 2 used the 65th Anniversary of Godzilla, perhaps the most famous of all movie monsters, to add a creature-feature to its list.

Mat Irvine: Round 2 already had a license for Godzilla, so decided to take the old MPC Willys Jeep, and reissue it as a Godzilla movie star. This movie is in fact the sixth from 1965, this one being ‘Invasion of Astro-Monster.’

The MPC kit is the first Jeep model kit to 1:25 scale, being issued in 1968 as the ‘star car’ from Hogan’s Heroes, a US sitcom of the time. Putting aside the improbability of a World War II German prison camp internee being allowed his own vehicle, the kit has provided modellers with a Jeep in an automotive scale, rather than the more usual military 1:35.

The model is fairly comprehensive with a separate engine, chassis and four-wheel drive running gear. It has the simplified interior you get with a utility vehicle, plus an optional rear seat, a fuel can, small arms, and a radio. A large recoilless rifle can be added, and a machine gun has its own support. There's even a stretcher if you want a M*A*S*H hospital scene, and a George Barris custom version, with a beach buggy-style Surrey top.

So you can make this Jeep in one of three versions, a Planetary Defense Vehicle from the movie, a standard military Jeep, or the Surrey top Barris design.

However, Godzilla is what it says on the box-top, and to support this theme, the kit box includes a large card diorama with a backdrop of Mount Fuji, card electricity pylons, and a fold-out Godzilla itself, albeit in 2D. Unfortunately, no human figures are included, and trying to find anything to represent Japanese soldiers in 1:25 scale will be difficult.

For more realism, you could swap the kit’s 2D Godzilla with a 3D version, using one of the many Godzilla kits that are available, including those from Round 2 itself. First of these was the Aurora original, reissued by Round 2’s predecessor, Playing Mantis, from the original Aurora tooling. This was issued in 2000, and is not in the current catalog, though examples are probably still around. Since then, Polar Lights has done its own Godzilla to 1:144 scale, and most recently Round 2 has reissued a 1:250 scale Lindberg kit, labelled as a Polar Lights model. There have also been various Godzillas from Japanese companies, so there is a fairly wide choice.

One point about the name of the movie. In Japanese it is ‘Kaijū Daisensō’ which literally (and appropriately) means ‘Great Monster.’ However, the movie has been released in so many versions that it has accumulated a grand total of 18 different English names! ‘Invasion of Astro-Monster’ is just one, the 17 others including ‘Monster Zero,’ ‘Invasion Planet X, ’ ‘Monsters from the Galaxies’ and ‘Attack of the Unknown.’ Take your pick, though if you are doing an internet search, it is probably best to use the Japanese name!

Side panels of the box (below) add interest to the kit, as they are packed with illustrations. 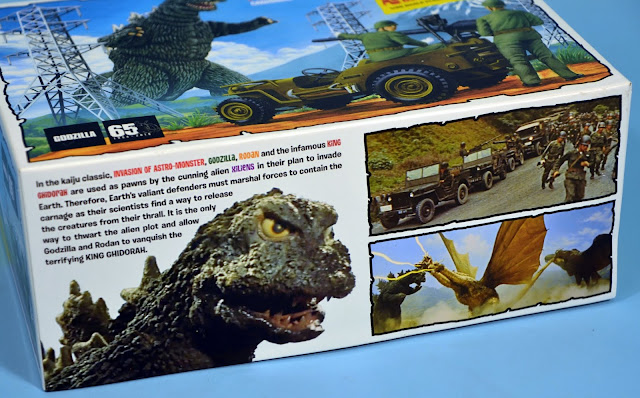 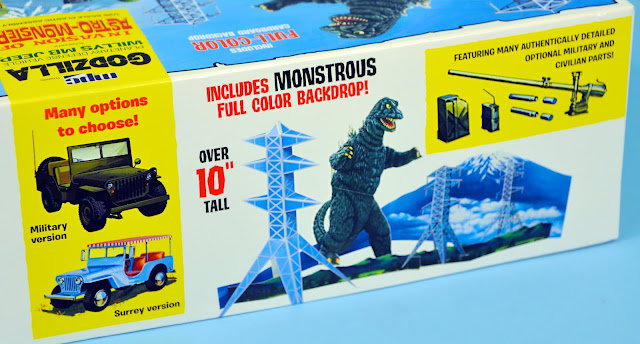 Parts layout (below) including the card diorama. 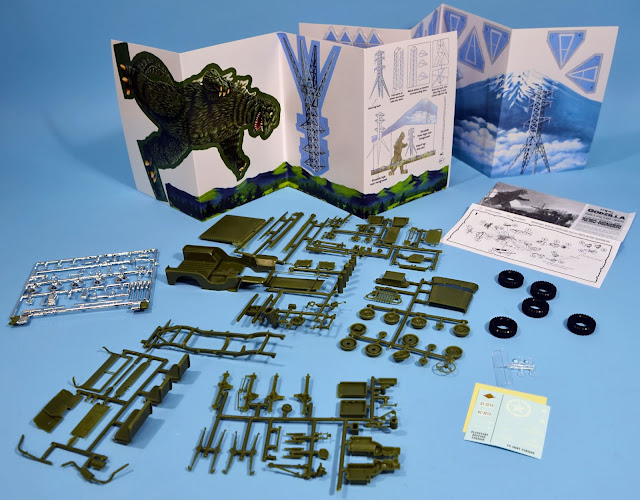 The card diorama pieces (below). The parts are pre-cut, with assembly instructions printed directly on the card. 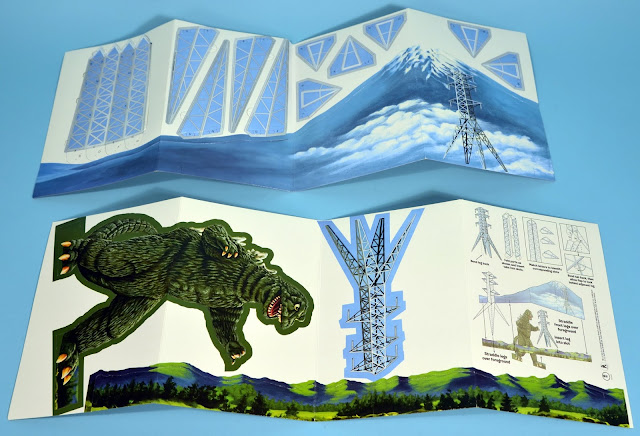 The finished diorama (below) will make an excellent set-piece for any Godzilla lover, as the monster stomps its way past Mount Fuji. 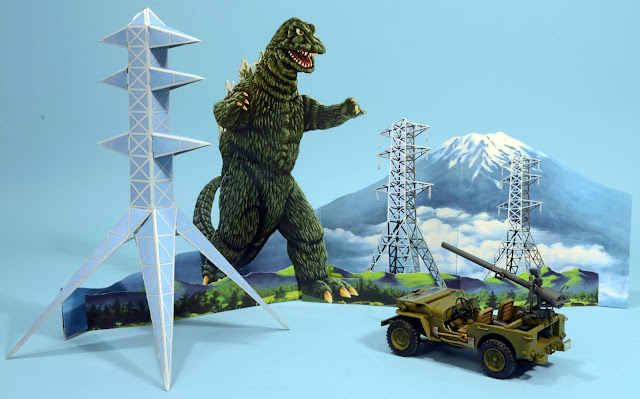 Here I used the old Aurora Godzilla (below) which looks surprisingly good, despite its considerably smaller scale, relative to the Jeep. 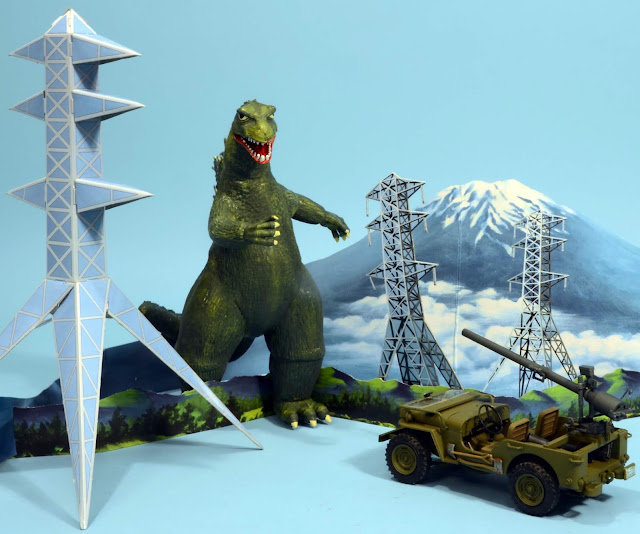 The Jeep assembles nicely (below) and looks very good with its main gun in place. However, it's a pity the Japanese soldiers depicted on the box-top are not included. 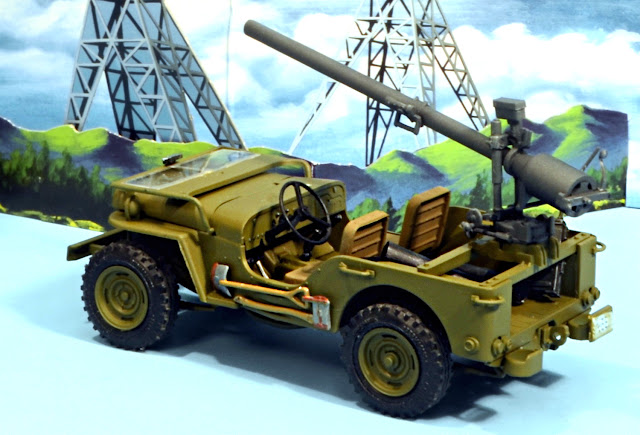 The Jeep (below) with the supplied accessories. 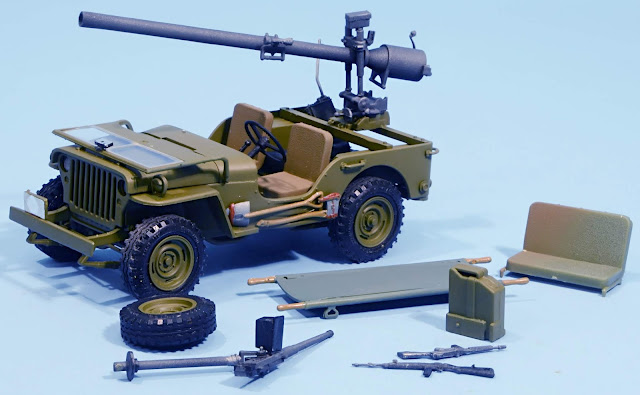 The 2D Godzilla (below) can be a bit floppy, so I braced it with a length of plastic runner. 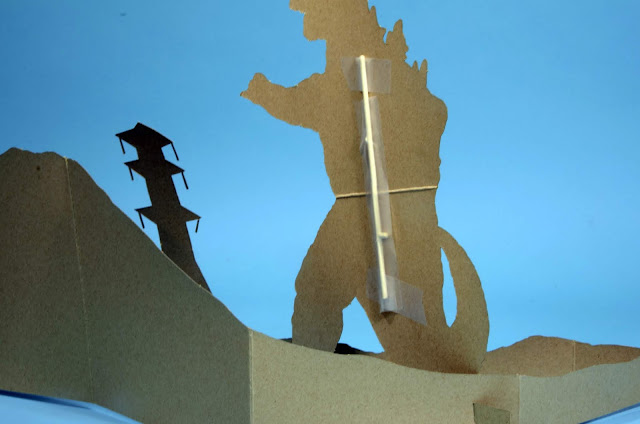 A still from the movie (below) is also used on one side of the box.

SMN note: And here's a taste of the original movie (below) to which we can only say, special fx have come on a long way since 1965!