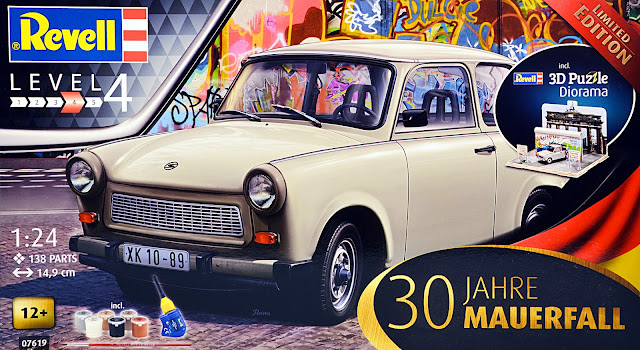 LAST YEAR MARKED the 30th anniversary of the Fall of the Berlin Wall, when Germany united from its Cold War-era ‘East’ and ‘West’ halves. So in 2019 Revell Germany celebrated the event by reissuing a Trabant kit with a large diorama base. This depicts a ‘Trabi’ breaking through the wall, into the West.


Mat Irvine: This Trabant is the same as the second version Revell produced. It has previously made two Trabant kits to 1:24 scale, the later one also issued in station wagon form. The Trabant in this anniversary box is a standard saloon.

The main point of the model is that a large diorama scene is included, featuring the famous Brandenburg Gate and a section of graffiti-sprayed wall, which has a large Trabant-shaped hole in it. The kit box proclaims this is a ‘3D Puzzle’ though in reality it isn’t, as there are instructions that carefully show you how it all goes together!

The diorama is made up from three thin foam boards, each being a sandwich of thin card with foam in the middle. This makes the boards rigid enough to have pre-punched slots that take assembly tabs from adjacent parts. There are 24 components in all, spread over three of these boards, each folded in half so they open out to a fair size. When assembled, the base is quite impressive, the Brandenburg Gate being some 220 mm (9 in) high.

The finished Trabi fits through the holes in the foreground piece, with signs provided on either side that read “You are now leaving the American sector” and “You are entering West Berlin.”

Interestingly, this Berlin Wall scenario has also featured in various full-size museum displays. The 1:1 scale exhibits shown below are at the RAF Museum Cosford, UK, and the National Museum of the USAF, Dayton, USA.

Back of the box (below) has plenty of interesting information, and note that paints are also included. 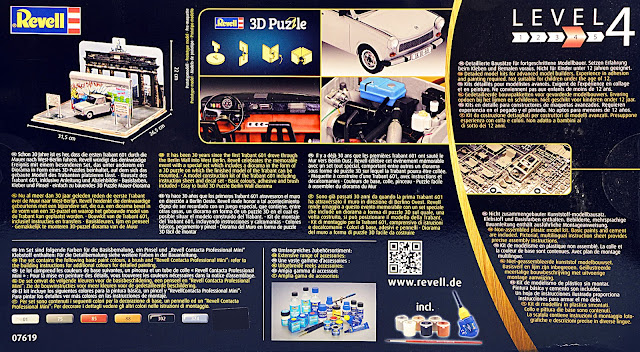 What you get in the box (below). The Trabant kit is the same as previously issued, but as extras you get the boards and pre-cut diorama components, plus cement and some paints. 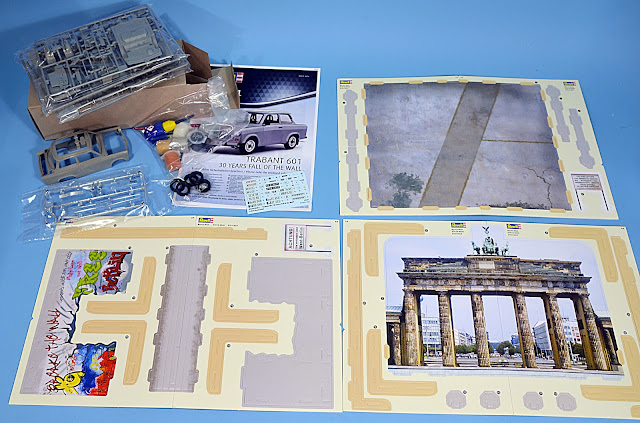 The fully-assembled model (below) looks impressive, and would make an interesting conversation piece. The photographic Brandenburg Gate backdrop works well. 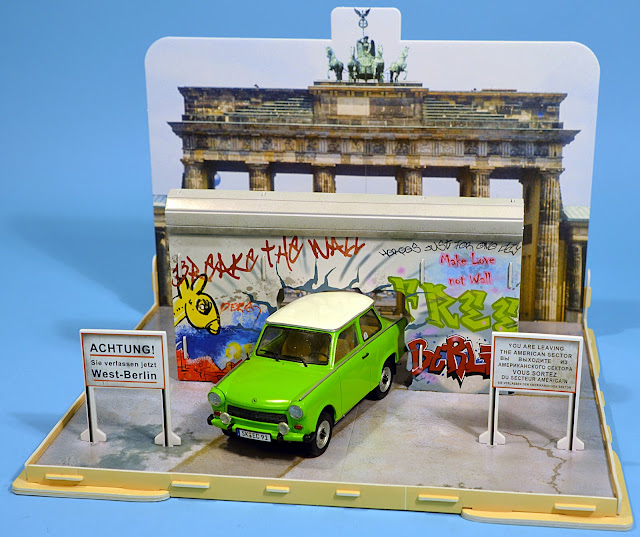 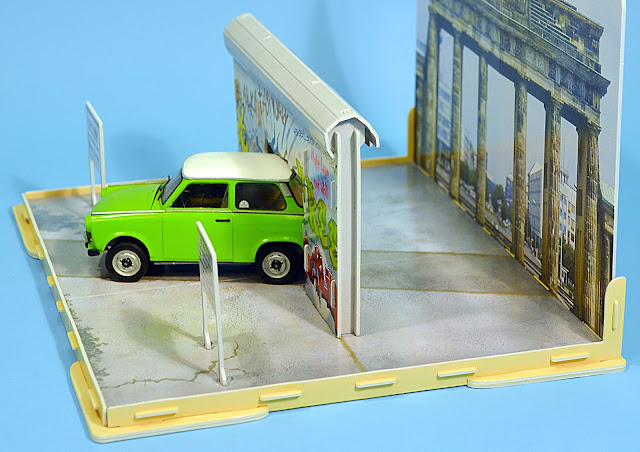 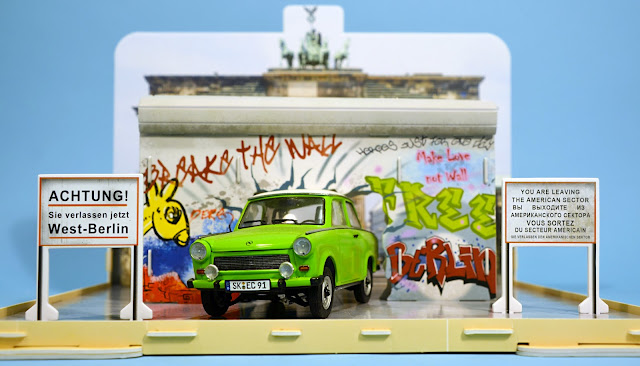 Note the finished setup lacks a figure, so I added one (below) from a Preiser set. The man is sculpted to model rail G-scale (1:22.5), so at this Trabant’s 1:24 scale, he is just a bit taller! 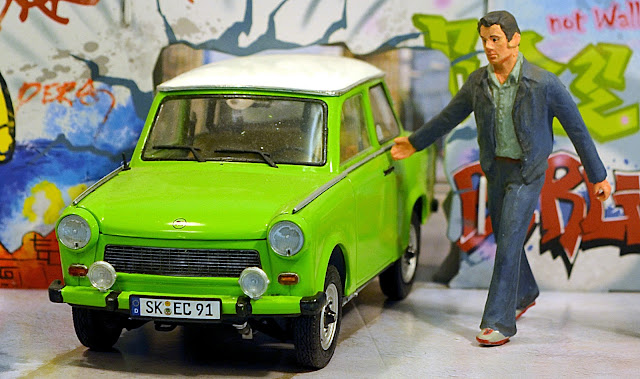 A Trabant (below) on display in the Cold War Gallery, RAF Museum Cosford, UK. 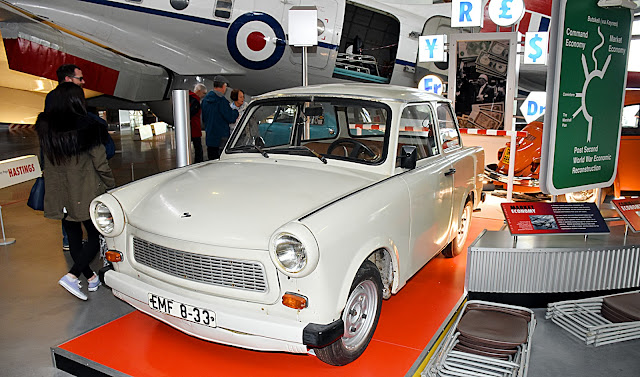 A Trabant and figures (below) on display with a section of Berlin Wall at the National Museum of the USAF, Dayton, Ohio. 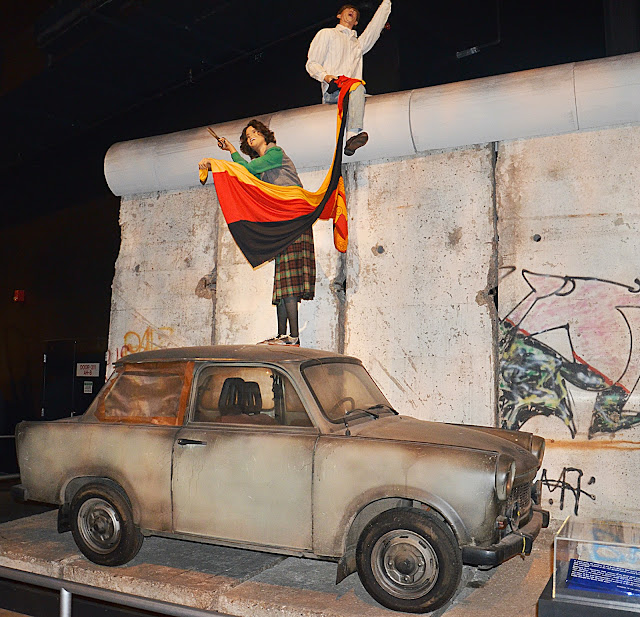 Thanks to Revell for the review kit.