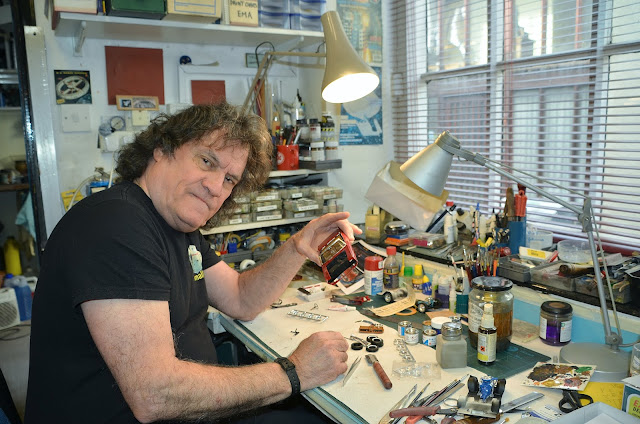 THE WORLD CURRENTLY FACES the deadly coronavirus on the rampage. But – and so we can maybe escape some of the gloom and doom – modellers can use some of the anti-virus measures to our advantage. And that includes the all-important isolation from others.


Mat Irvine: We are, after all, already mostly ‘self-isolating.’ Most hobby modellers work by themselves, and frankly most of us already have a large collection already in stock that we’ll never really get through.

But might there be more of a problem to decide ‘just what to build’? My old friend in Chicago, model maker and musician Dean Milano, doesn’t have that precise problem, as the decision is already decided in the stars. He uses lottery (or raffle) tickets, each kit in his stash collection being assigned a ticket.

So, when one model is finished (he only ever works on one at a time), it’s close his eyes time, reach into the tin and pull out a new ticket! Dean builds primarily cars, but there are other kits in there. For example, he is currently working on a Revell-Germany Mercedes-Benz Fire Engine, and recently built a Czech Model 1:48 scale Grumman Goose. Interestingly, if Dean makes an aircraft model, it’s always a civilian machine, or one that can have civilian markings applied; he never builds military aircraft.

Personally, I’m far less organised, so no raffle/lottery tickets for me. When it’s time for a new-build, major decisions have to be made. However, my excuse is that for many years I have done kit reviews for various model magazines – and of course, for Scale Model News – so the decision might have been made for me, as there was a stack of kits to review. Years ago, when I was writing regularly for Scale Models International (which I did for 25 years!), I would usually have several builds on the go. At one point I recall that I was building no less than SIX Corvettes from various model manufactures and of various vintages. I had them all hanging up in the drying cabinet, at which point I forgot which body went with which chassis…

Fortunately though, my reviews were usually less marque-specific. There might be half a dozen needed at once, but they were different enough to tell them apart at a glance.

Reviews or otherwise, I still tend to have several kits ‘on the go’ at any one time – there’s never just one, and often a mix of subjects. In earlier times, in fact my school days, the first port of call was to a Woolworth store. At that time the store chain sold Airfix kits, and always got them first. On reflection, that does seem a bit unfair to specialist model shops, but I suppose that even then, deals were struck to ensure that this important outlet had its supply of kits. So with similarly-inclined model-making school friends, I would visit Woolworth every month for the latest kit releases, at that time Airfix seemed to average at least six a month. And my friends and I would buy the lot – aircraft, tanks, cars, ships, figures, even railway accessories.

However, as the years rolled by I became more selective (aka running out of storage space), so these days I just deal with cars and space. This initially split so that car models were the hobby, while space models were to a certain extent part of my special-effects career.

Science-fiction continued for many years, but eventually I felt I really had enough of Star Trek and Star Wars craft, so now unless it is of real interest, the SF side has diminished. But there are still more than enough car and space kits in stock to keep me busy. So what’ll it be next? Maybe that Revell Space Station…

Dean Milano (below) and a few of his kits, “Well that’ll make a change…” 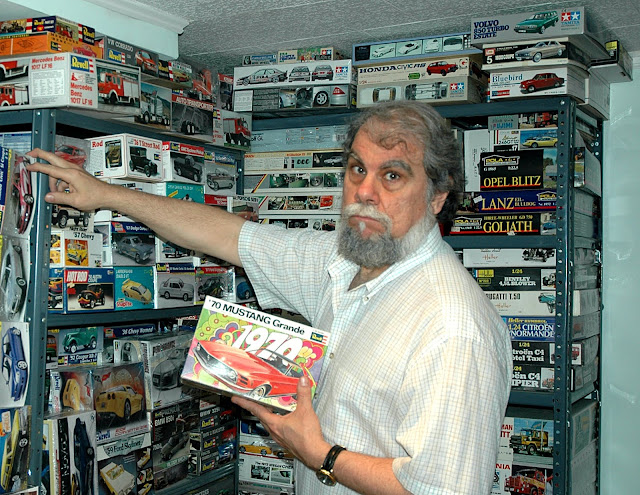 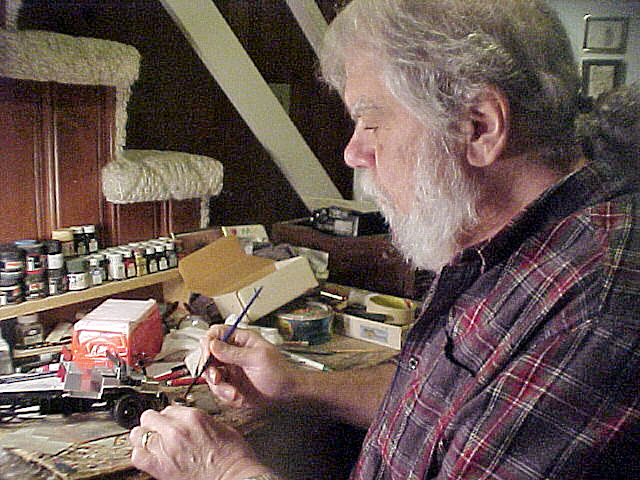 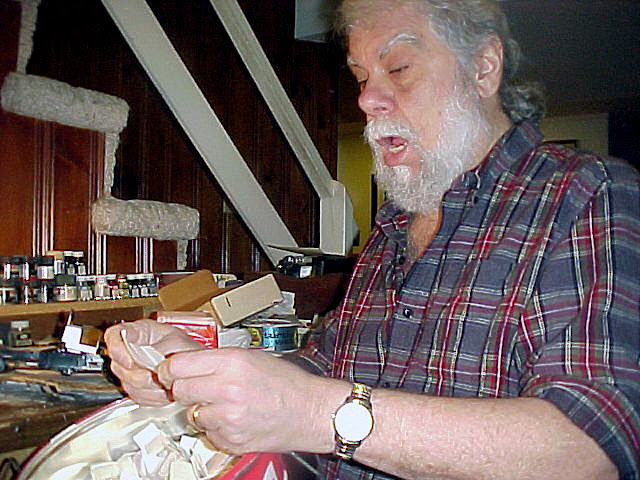 Mat's workshop (below): “Hmm, I'm not sure there's enough here to keep me going.” 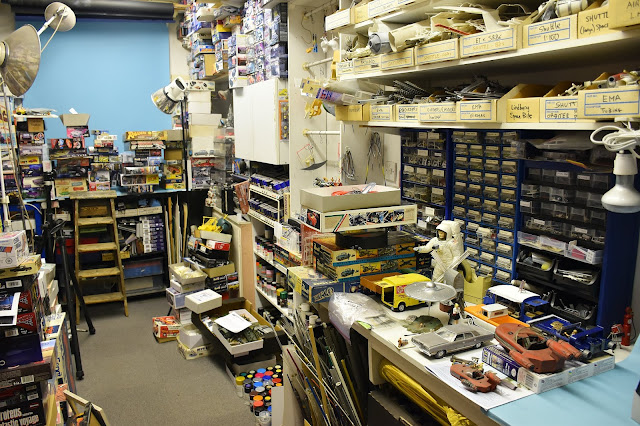 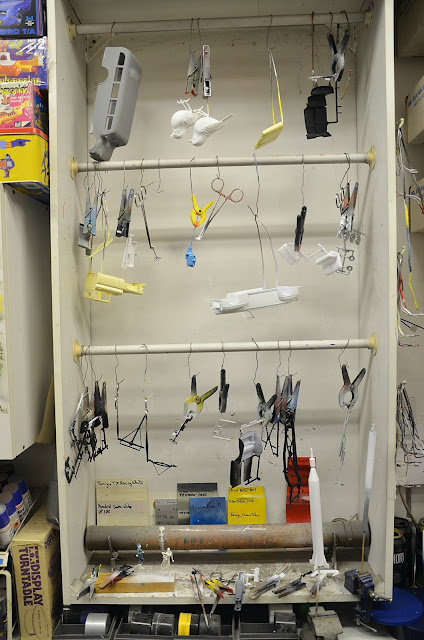 Maybe just a couple of cars (below). I'm holding a converted AMT 1969 Mercury Cougar. There’s the chassis of an AMT 1965 Buick Riviera in the background

Perhaps I'll try the Revell Space Station next (below). 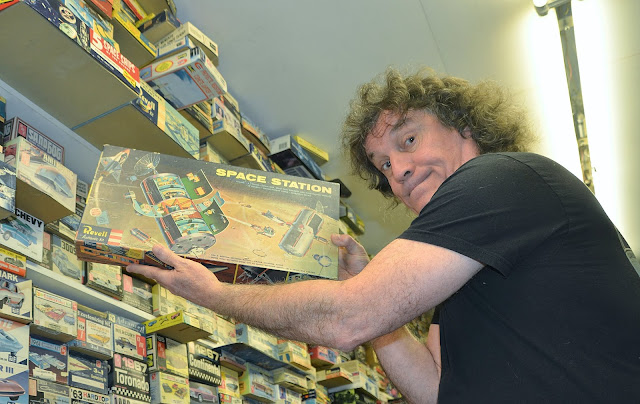 An eclectic selection, not all Corvettes. 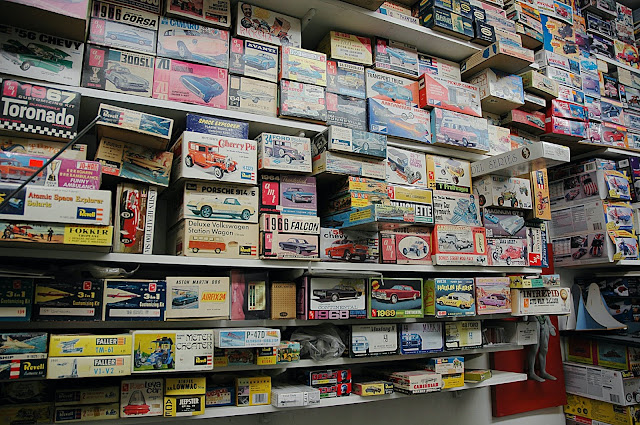