STEAMPUNK COMES TO MODEL RAIL WITH A NEW BASSETT-LOWKE RANGE 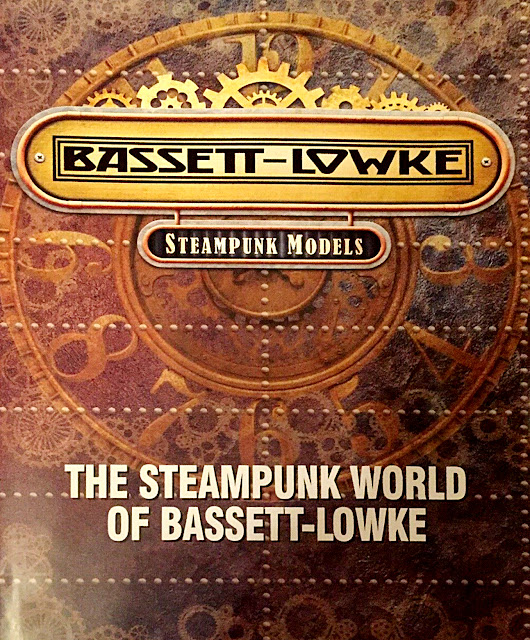 THE BASSETT-LOWKE BRAND DATES BACK to the late 1890s. So it's appropriate that the Hornby-owned company is now trailblazing a path back to that era with a dedicated range of steampunk-inspired locomotives, rolling stock, and accessories.


SMN report: There’s a whole backstory associated with the Bassett-Lowke venture. Here's what B-L has to say about it:

“So this is the new world; a world of mad science, eco-warriors beneath the waves and empiric wars. The three-mast clippers are now too slow to get their precious cargo past the devastating submersibles of those that despise empires, whilst the horse and cart falls constant prey to the hungry lizards that slip through the streams. The tea must get through though, the world demands it.

“Wenman Joseph Bassett Lowke is one of those concerned; a seasoned maker of steam boilers, industrial brewing equipment and proud owner of some of the finest aromatic tea plantations across the world. That precious crop had to be delivered; he needed a fast, reliable solution and when you know a thing or two about steam power you know just the mavericks for the job.

“Foreman, Cornelius Chuddery, rounds up his team of skilled train jockeys – they have the nerve and they have the engines. With lucrative bounties on the line for getting the goods in first, the task of getting the tea across the new world is back on. The clippers had been good for their time but now the world needs trains and fast ones!

“Boston Grey is the sort of man who knows how to inspire the lords and ladies; with a rakish smile and top hat to match, he and his bright young things would make a party of getting the tea through. Fuelled with lashing of aristocratic madness their tea party could win every race and have fun being bounders as they sabotage the efforts of their rivals.

“They call themselves ‘The Hatters.’ Rosie Rivette is a wartime factory foreman, stood proudly alongside her sisterhood; they are embracing change and are damsels in distress no more. By repurposing the great diesel machines they had silently built, run and maintained (as the menfolk fought in the many wars) they will prove the not so fairer sex were the gals for the job. Emblazoning their engines with the art of empowered women they took to the rails as the ‘Diesel Dames.’

“Adder Stone has a keen sense of adventure and he knows across the back yards of the empire the true heroes labour in their outbuildings.

“The real inventors, with a make do and mend attitude, if anyone deserves the rich bounties for getting the tea through, it is the unsung back yard grafters. Salvaging all they can from wherever they can; they built engines from their hoards of scrap and stitched them together with blood and spit to became the ‘Coop Commandoes.’

“Build an imaginative world of innovative trains as they race the precious cargoes of Wenman Joseph Bassett-Lowke across a perilous SteamPunk landscape.”

Blimey! So now you know what's behind the idea. And the pages below from the nicely-produced brochure give more details. 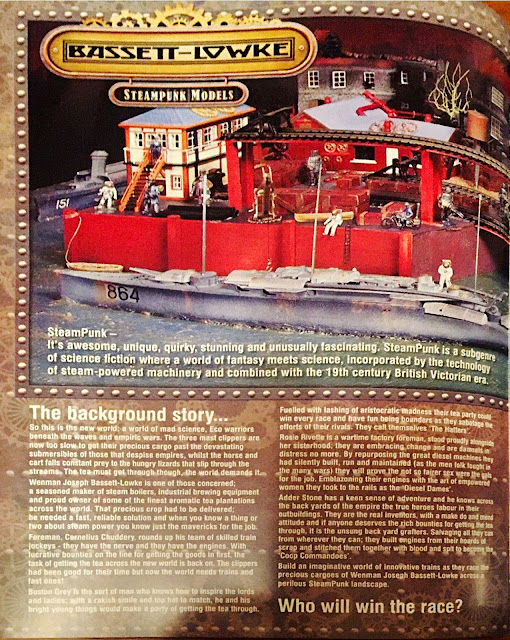 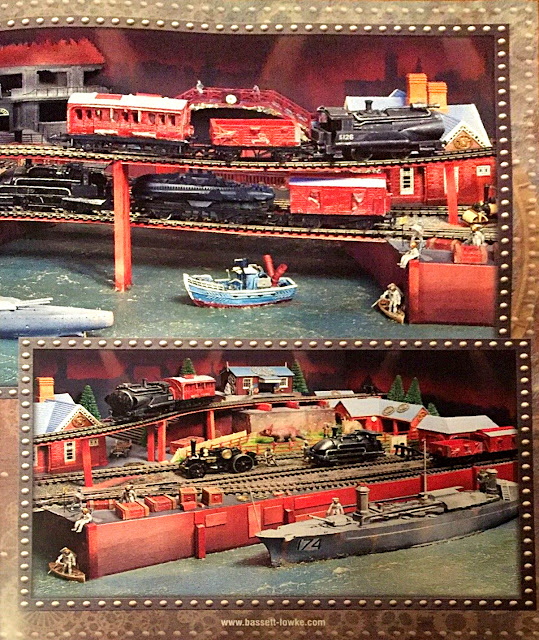 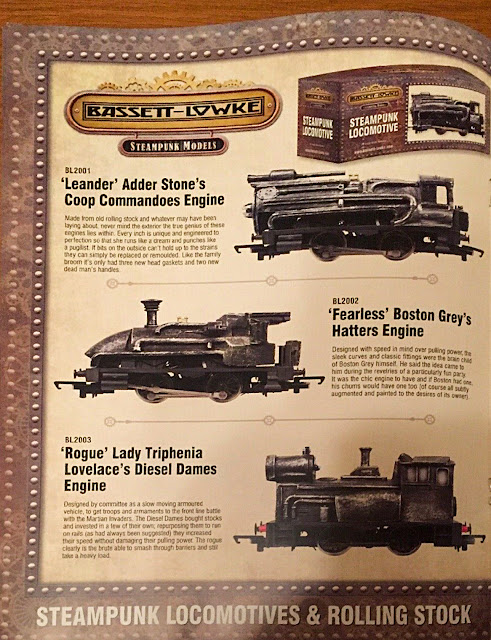 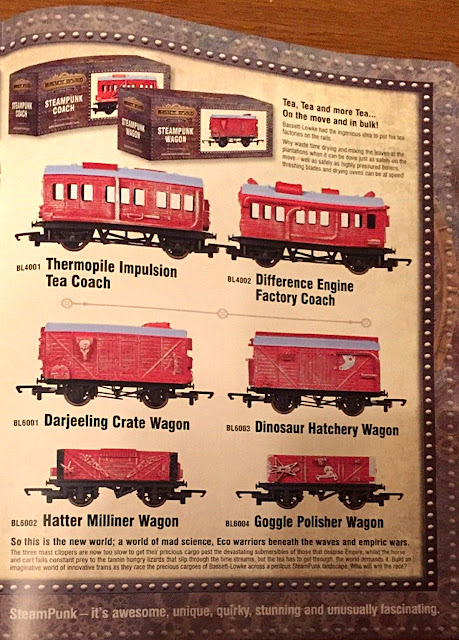 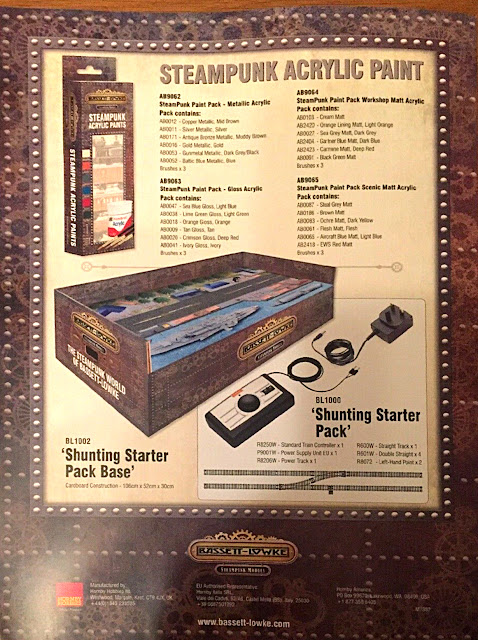 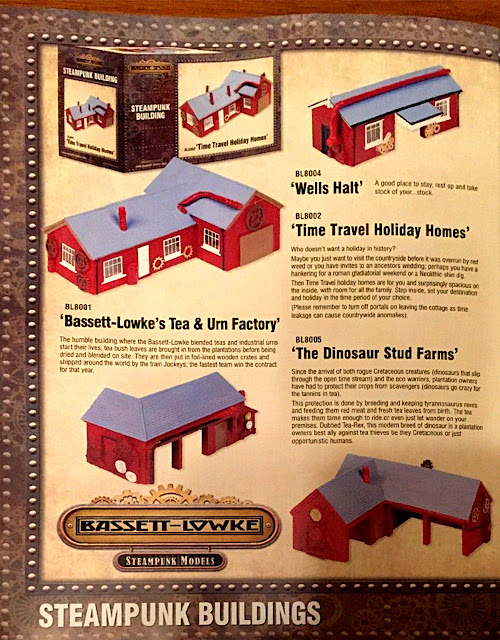 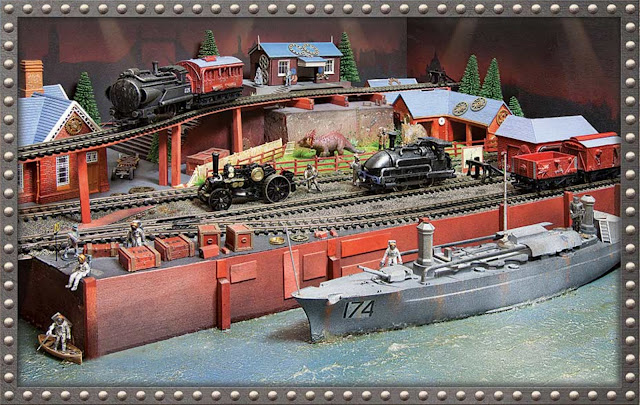 And click here to visit more Steampunk at SMN.


And for traditionalists, here's a look at Bassett-Lowke in times past, with three adverts aimed at young rail fans.

Radio Times, the world's first broadcast listings magazine, ran this ad (below) for Bassett-Lowke in the 1920s. These two ads (below) ran in the Boy's Own Paper of January and February 1955. The small-format magazine was packed with adverts ranging from rail to diaries, glucose tablets to chocolate. 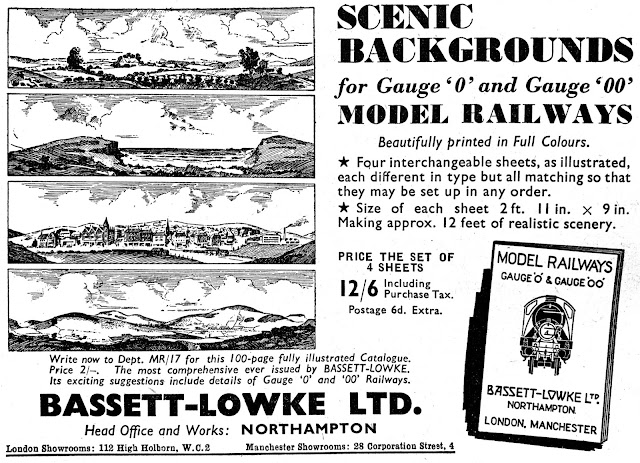 Boy's Own Paper wasn't just for the Brits, as it had a world-wide readership. The March 1955 issue featured a Pennsylvania Railroad 4-4-4-4 streamliner on the cover. 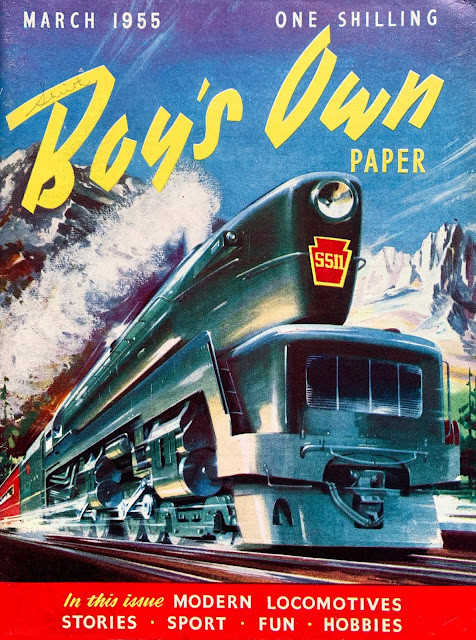