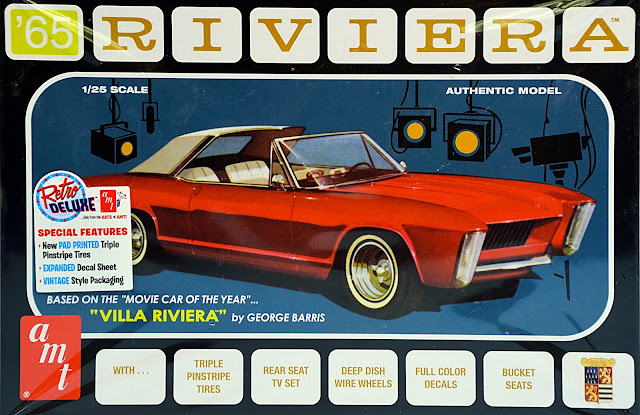 THIS 1:25 SCALE BUICK RIVIERA CUSTOM is a reissue of a kit first released by AMT in 1965.


Mat Irvine: I mentioned the chassis of a 1965 AMT Buick Riviera in my recent article, ‘Scale modellers and Self Isolation’ so here’s a closer look at the Riviera, the chassis of which was in the photo of my workbench (circled below). 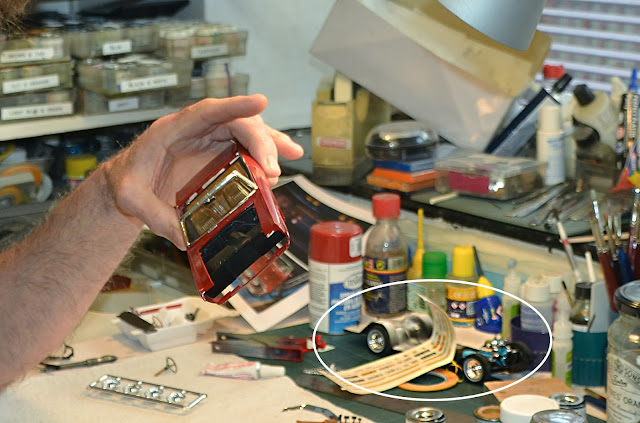 The kit is a reissue of the AMT 1965 Buick Riviera, one of the company’s ‘annual’ kits, released each year from the late 1950s to the early 1970s. These were ‘3 in 1’ kits, meaning that you could build one of three supplied options, almost always being stock, competition, or custom. The 1965 Riviera was a 3 in 1 kit, but there was no competition version, instead having two custom options.

The ‘Villa Riviera’ came about as a present from General Motors’ Buick division to car-customiser George Barris ‘to do with it what he thought best.’ Unsurprisingly, Barris accepted the car, and was ready to start some mild customising on it.

George Barris workshop
The Barris workshop was then in North Hollywood (pictures at bottom) and movie producers and directors often dropped in to see what George was working on, and to see if it might be featured in their latest film.

One such visitor was Leslie H. Martinson, who was directing a new ‘beach movie’ For Those Who Think Young, a title based on a Pepsi Cola slogan of the time. Martinson wanted a special car for the star Bobby Darren to drive. The Villa Riviera caught his eye, but Barris was planning to paint it bright Kandy Cherry Red, with a white vinyl cantilever roof. Martinson thought the bodywork would look better in white for ‘photographic’ reasons, which is a little odd, as directors of photography usually don’t want a car in white. However, Martinson insisted, so George Barris obliged, and the Riviera ended up painted white with a red roof, the opposite of the planned scheme.

After the movie was completed, the car was returned to Barris, who stripped it down and finished it the way he originally intended. The kit box-art depicts the car in this finish, which is probably more significant historically, and better-looking.

About the kit
The kit doesn’t quite allow you to build the car as seen in the movie, but you get most of the way. The original Villa Riviera used an experimental interior, with new bucket seats and dash. But actually, the kit interior remains basically stock, with just the addition of two telephones and a small Sony TV. The latest instructions point this out, and say ‘use the stock interior.’ However, the exterior has the Barris custom front and rear ends, the front as depicted in the kit being the more authentic. Three sets of wheels are supplied, the Astro set being correct for the Villa Riviera. There is also a set of authentic triple thin white-wall tyres, here termed pinstripe, which is a first for this or any other kit.

There is also an expanded decal sheet that includes decals for the chrome strakes on the hood, which, unless moulded in, would be difficult to reproduce any other way.

The TV and telephones are included, though the TV is not fitted facing back between the front seats. Instead, it fits between the rear seats, and faces forward.

One thing not included is the clear display base included with the original 1965 issue. It has been omitted ever since, but otherwise the new kit remains the same, but with better decals and tyres.

The new kit box (header pic) has a 'Retro deluxe' label attached to the cellophane wrap. The rest of the box matches the original very closely

Original 1965 box for the 1965 Buick Riviera (below, top). The new box (bottom) is slightly modified, otherwise the two are much the same. 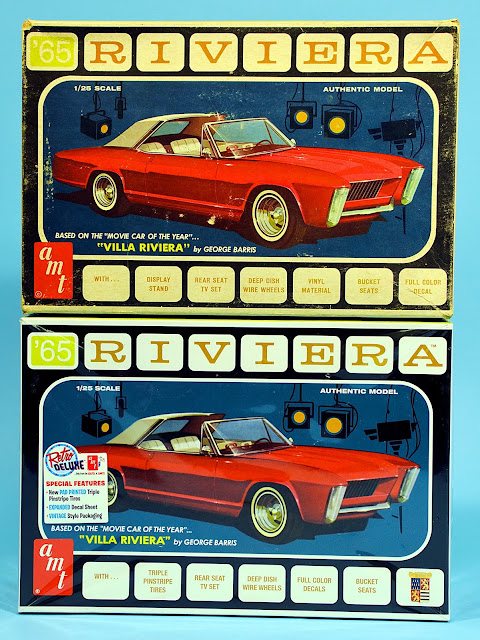 Ends of the two boxes, 1965 version (below left). Apart from the reference number (and the original is somewhat faded!) they are identical, though the new box is slightly deeper.

Original 1965 box side (below, top) featured the supplied display base. This is the only component not now included, and does not appear now. Note that AMT no longer makes its own paint range. Instead, the paint list has been replaced with the new triple-pinstripe tyres. 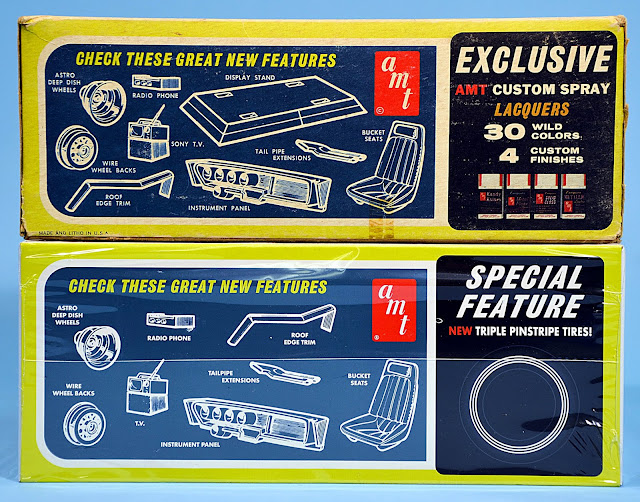 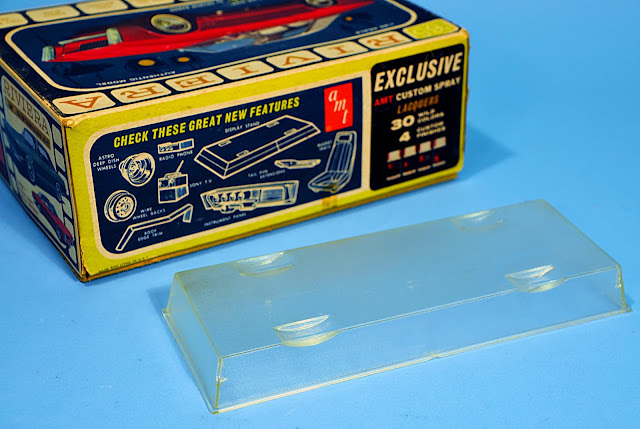 The 1965 box (below, top) with two later issues. The middle box is from 1986, the bottom box from 2004. Both are far less interesting designs, but the kits did include parts for the Villa Riviera. 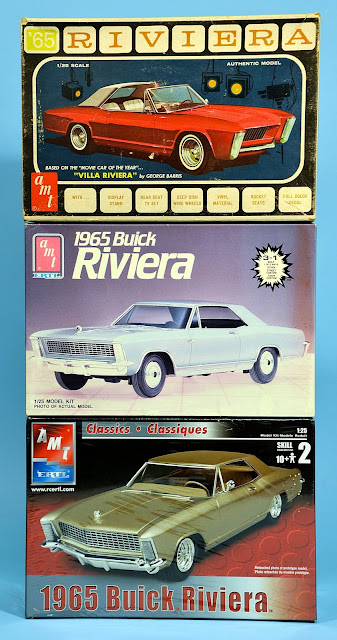 Paperwork (below) that comes with the recent issue. Included is a postcard with George Barris and James Darren in front of the car. The instructions are mostly a straight reprinting of the 1965 original, but the decal sheet is much better. 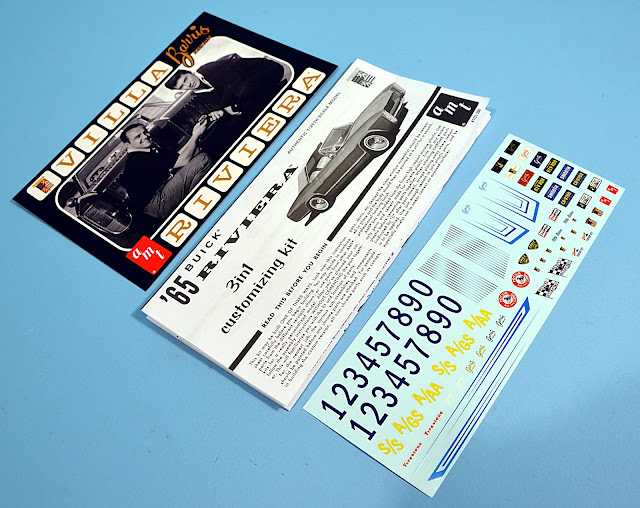 Decals compared (below) with the smaller 1965 sheet at the top. The much improved new version has decals for the chrome strakes on the hood. They would be difficult to reproduce any other way. 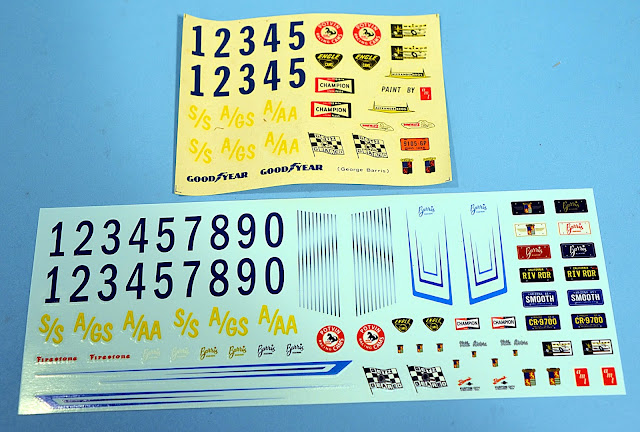 The Villa Riviera finished in its movie form (below) in white with a red top. On the full-size car, the white was actually a primer finish; here I used Testors metallic White Lightning to at least give it a bit of ‘a look’! The interior is basically stock, while for the two phones I added cables made from very thin wire. The Sony TV is now correctly positioned on the back seat. 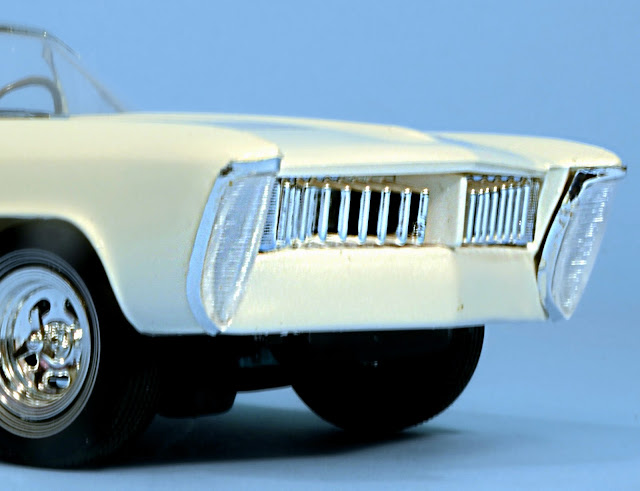 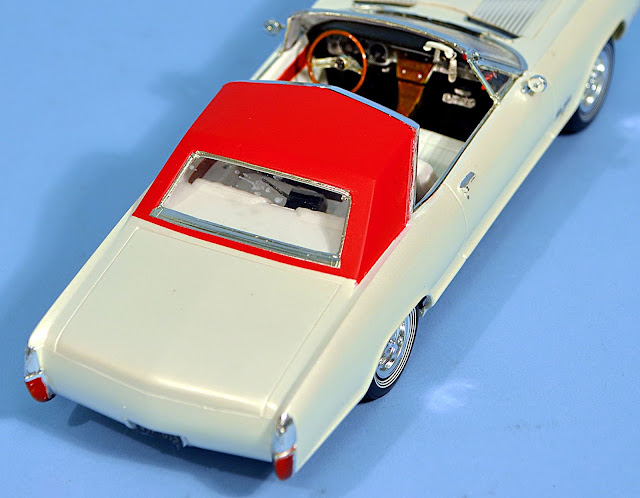 The white movie version (below) compared with the way Barris intended, candy red with a white roof. This is a contemporary-built model from way back in 1965. The car also featured on the cover of the book Barris Kustoms of the 1960s. Note he always spelled custom as ‘kustom.’ 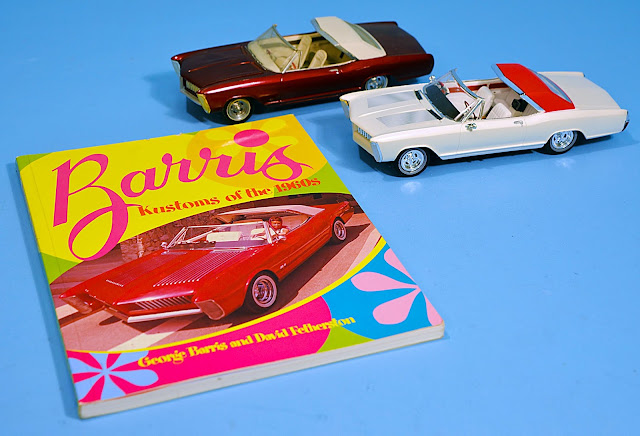 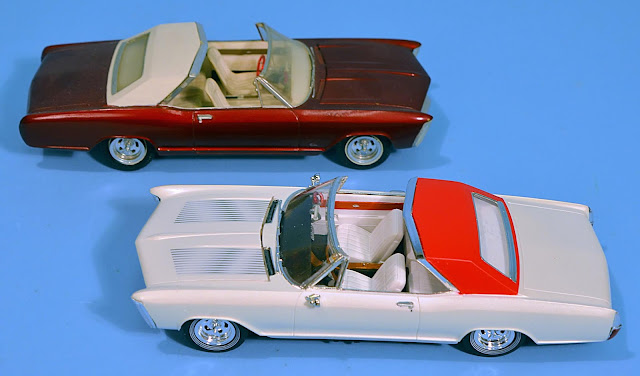 Screen grab from the movie (below) shows a pair of surf boards atop the Riviera's roof. 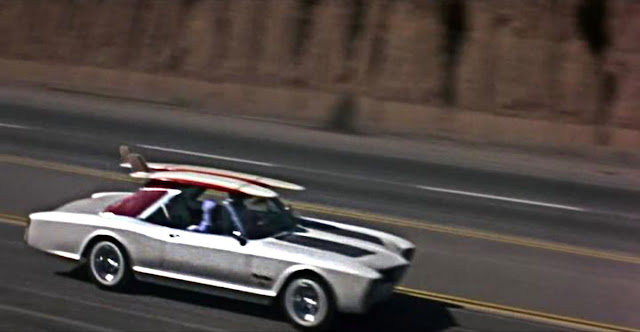 Boards on top, hoodie-wearing passenger, and mobile phone in use. 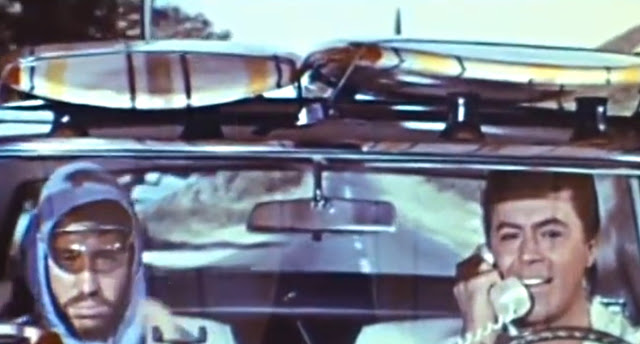 In the movie studio (below) with Leslie H. Martinson directing. 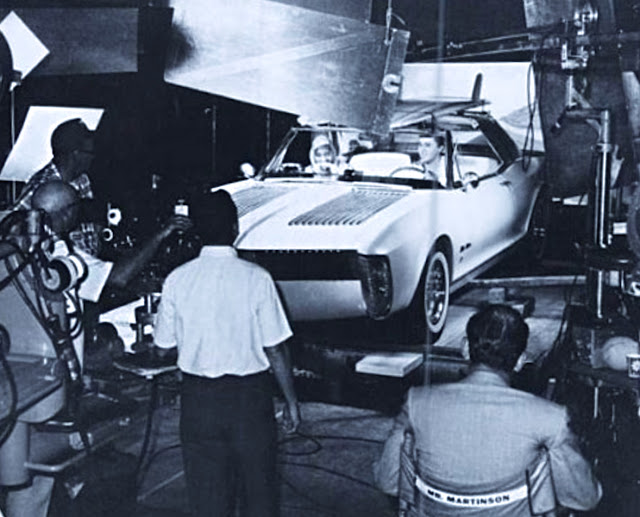 Another screen grab (below) shows off the Villa Riviera lines well. 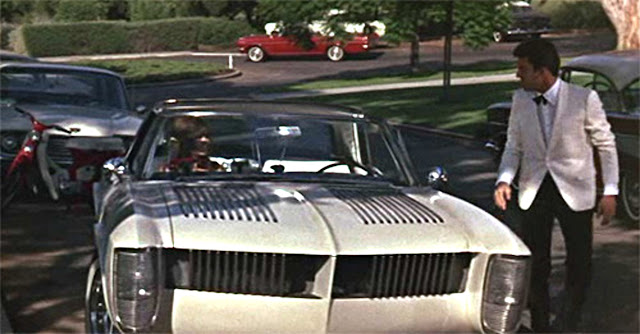 The car (below) on display, complete with bathing-suit beauty. 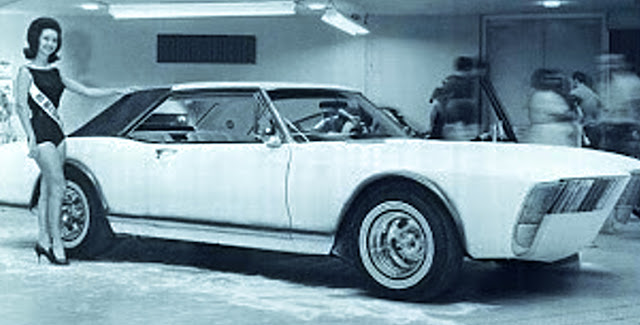 The George Barris workshop in North Hollywood as it is today (below). It is now basically a showroom, with limited opening hours. 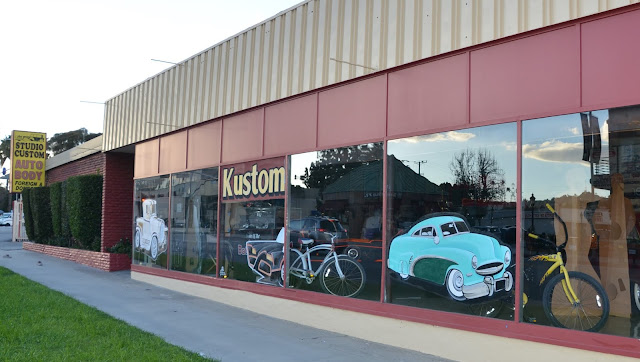 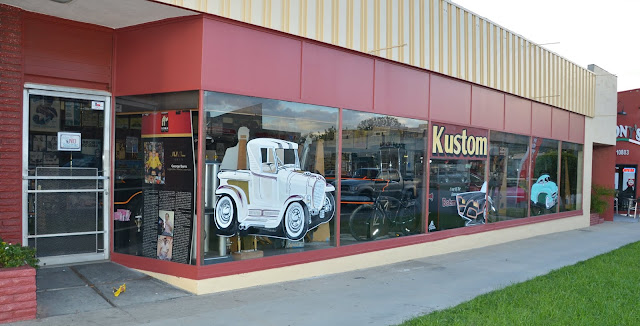