GERMAN BENZ THREE-WHEELER TO 1:24 SCALE, FROM ICM OF THE UKRAINE 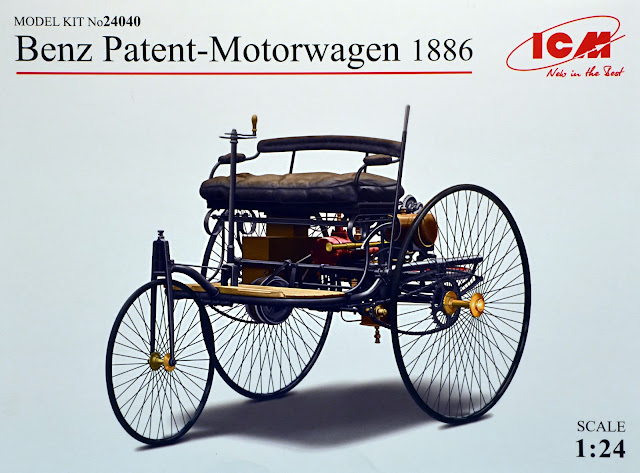 UKRAINE MANUFACTURER ICM has released a 1:24 scale model of the world’s first car, the Benz Patent-Motorwagen of 1886.

Mat Irvine: Considering the historical significance of the Benz Patent-Motorwagen, it is slightly surprising that the world’s first road vehicle powered by an internal combustion engine has never featured as a model kit before. There have been diecast models and toys, but this is the first construction kit.

However, this is not an easy or straightforward build. If you are used to assembling kits from traditional model car companies, this is completely different, so take note.

The actual vehicle was not large, with a length of under 2.4 m (under 8 ft) which is less than a classic Mini, at 3 m (10 ft). In reality, the Benz was a much like a horse-drawn vehicle, but with three wheels, and a single-cylinder engine, Coincidentally, this provided a similar power output to that of a horse, some 0.9hp.

The intricacies of kit construction, and ICM providing absolutely everything, means that many of the parts are extremely small. For example, the ‘caps’ that fit over the drive chains are under 2 mm in diameter. Also many parts are so thin that it’s a wonder they could be injection-moulded in the first place. So great care is needed to remove them from the runners, and you may find it easier using a small razor saw. Don’t be tempted to cut small parts off with clippers, as you’ll almost certainly break them.

Colours are given throughout, though most of the chassis and the wheels are gloss black. Copper and brass are used for some engine parts, and the main engine block can be black or red. Using the latter adds some contrast to the otherwise dominant black.

Photo-etch parts are used for the wheels, which have very thin spokes, and even with ICM’s moulding skills, would be virtually impossible to do in styrene at this scale. Each wheel is in two halves, and a jig is supplied to line up the thin solid tyre with the spokes. The photo-etch is copper, so it is very easy to work with. Cut the tips of each spoke with a sharp blade, cutting as close to the end as possible, as you don’t want a ‘tag’ left. This is because each tyre rim has an indentation for the end of each spoke. The jig allows you to line everything up, and bend the spokes ever so slightly, to give a ‘very flat cone’ appearance.

At this point the instructions are slightly ambiguous, as it doesn’t appear that the ends are intended to be glued to the tyre rim. But I wasn’t convinced it would all hold together when the rims were cut from their surrounding runner, linked up with the central axle fitted, and the two halves glued together. So I used an extremely small drop of thin superglue. On reflection, it might have gone together without the superglue, so I may have to get another kit and try again!

Another slight ambiguity is the listing of ‘Variant 1’ and ‘Variant 2’ when it comes to the drive belt. This is because the belt is supplied as two drive wheels with a section of ‘belt’ moulded in, plus two pieces to represent the belt as it ran between the two wheels. But in case you want to scratch-build the belt (or use a suitable rubber band) you also get the drive wheels without the moulded-in belt sections. Again, it’s initially somewhat confusing, but when you realise this, it all becomes plain.

Besides the spokes for the wheels, photo-etch parts are also used for the drive chains, You have three PE parts to sandwich together for each side, though this makes a structure that would be thick enough to injection-mould, so it does slightly beg the question as to why ICM, given its precise moulding techniques, hasn’t gone down this latter route.

However, the issues above aside, you will certainly end up with a unique model, though one that needs careful handling, as it is extremely delicate. Probably the best way to pick it up is by holding a wheel or perhaps the horizontal flywheel at the rear. Overall, I think it needs a diorama base on which to stand, which will help a lot.

Carl and Bertha Benz
The car was built by Carl Benz in 1886, and overall he built an around 25 of this type of vehicle between 1886 and 1893. He took out a patent on the car, although interestingly the patent shouldn’t really have been held by Carl Benz, but by his wife, Bertha Benz, who financed the whole endeavour. She, more than her husband, was also very keen on publicity, so that she went on the first ever ‘road trip’ with their two sons.


The contents (below) of the ICM box include instructions, one main and two smaller runners, an assembly jig, and the copper photo-etch sheet, which comes in its own envelope. 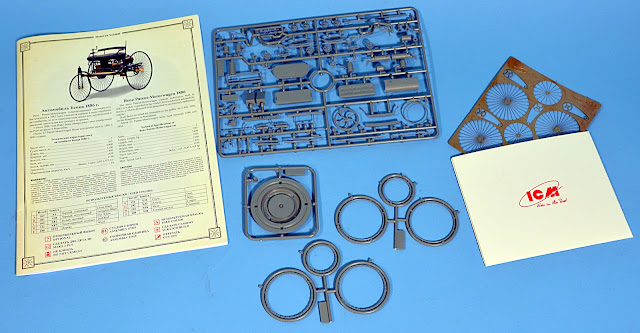 Parts for the wheels (below) include the copper photo-etch sheet and thestyrene parts. The jig parts are at the top. 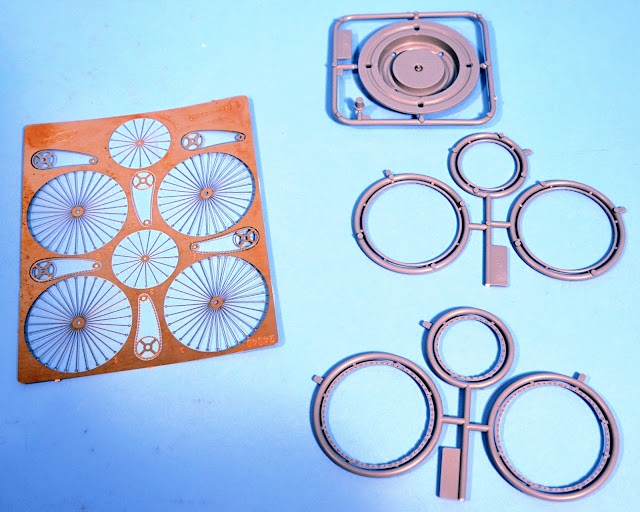 The instructions (below left) are printed in full colour, and are accompanied by a reproduction of the original patent application for the vehicle. 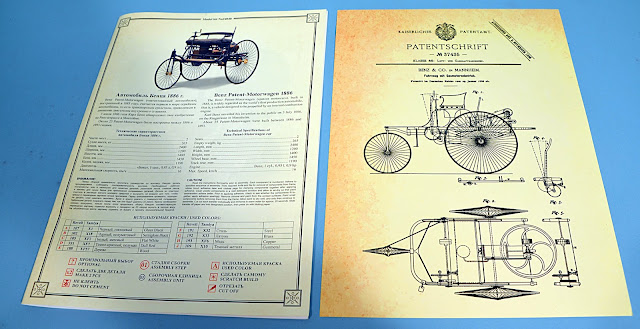 The finished Benz (below), and two shots of it on, standing on a scratch-built diorama base. This not only looks good, but also means that you can minimise handling the delicate model. 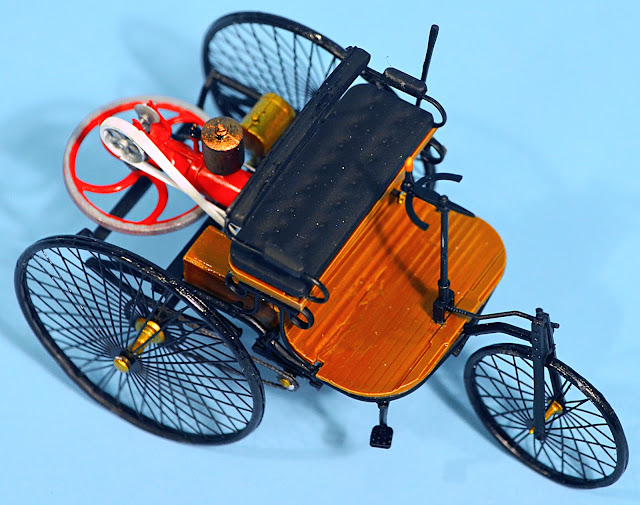 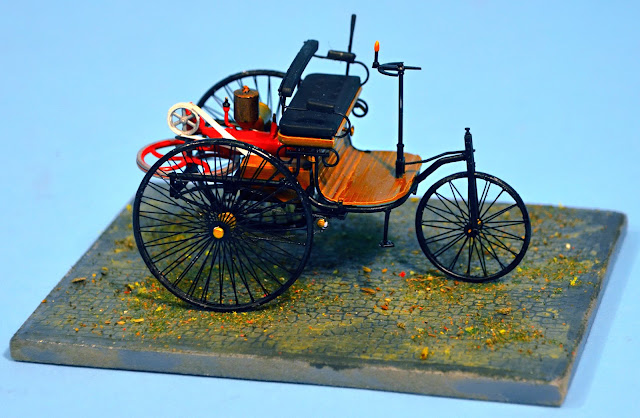 I photographed the Benz (below) next to a same-scale Revell Monte Carlo Mini to show how the two vehicles compare. 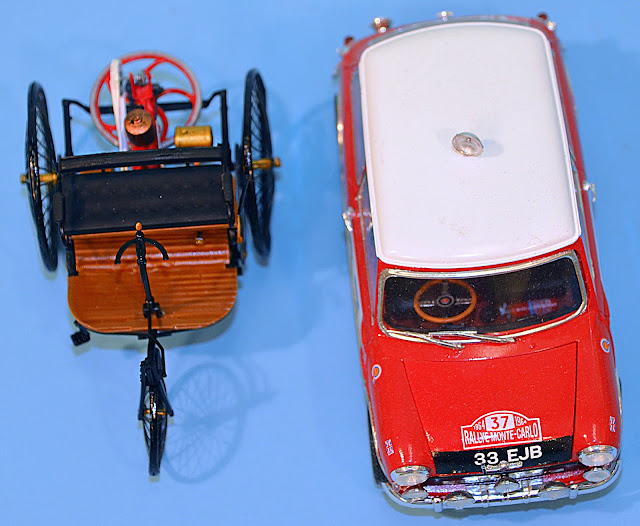 Assembly of the wheels (below) is an exercise in great care and extreme patience. However, the finished result is definitely worth the effort. 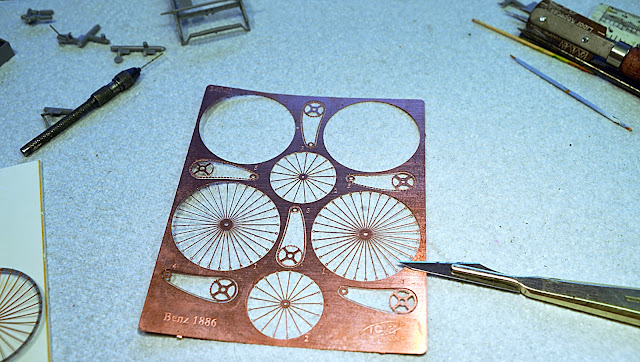 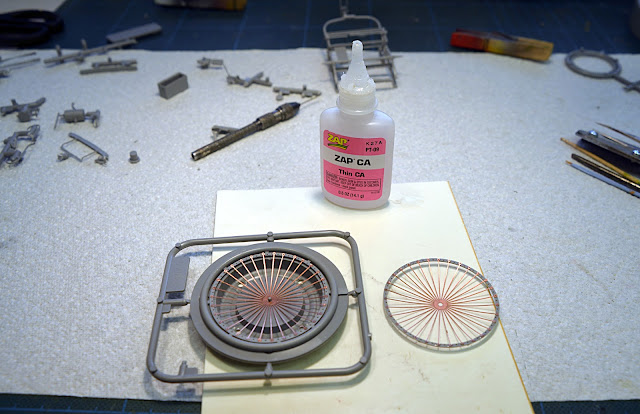 The components that make up the Benz rear section (below) are a detailed work of art.


A second kit by ICM is available (below), and this features nicely sculpted figures of Frau Benz and her boys. 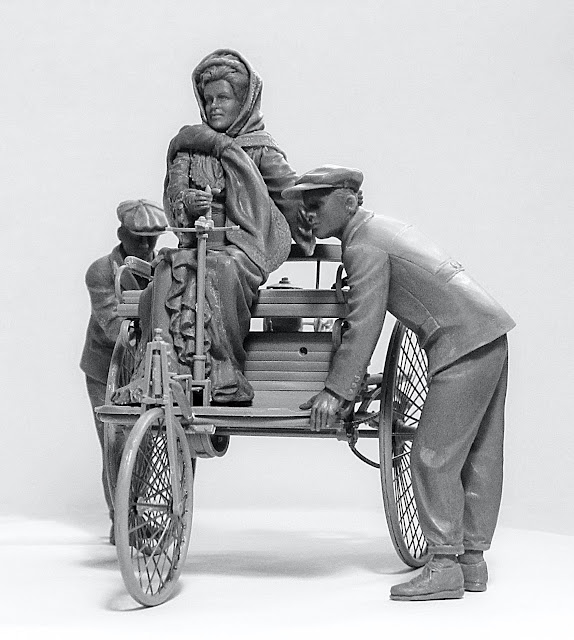 Here are some pix (below) of the real thing, actually a nicely-made 1:1 scale reproduction. I took the pictures when I visited the excellent Volo Auto Museum, in Illinois. 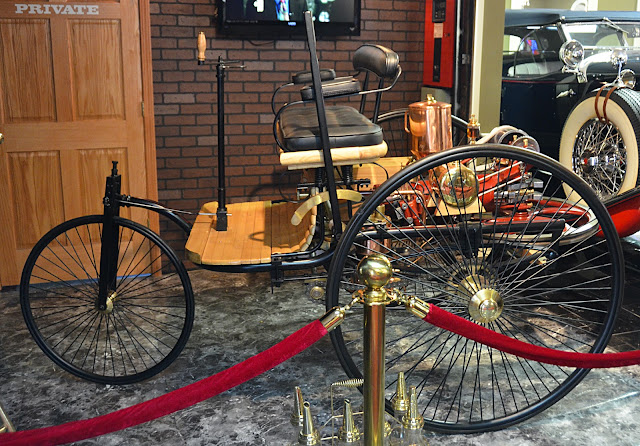 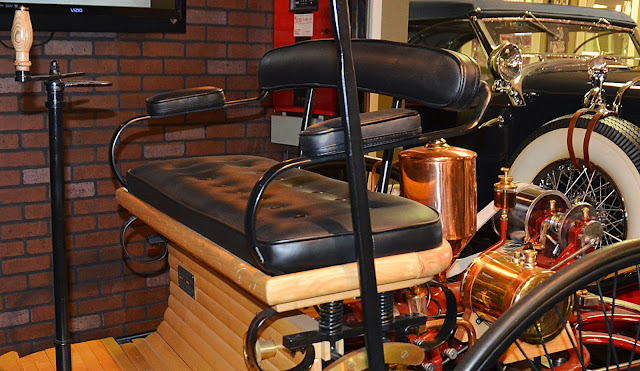 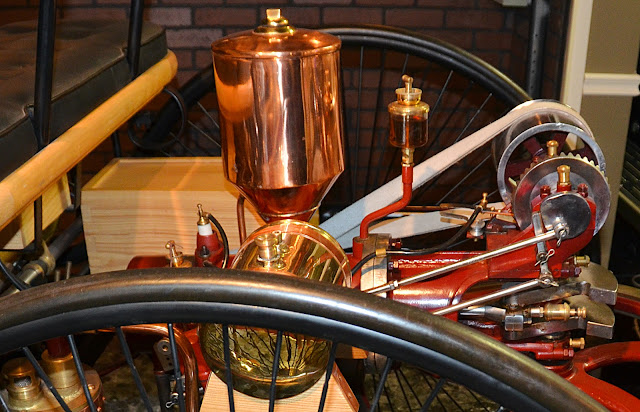 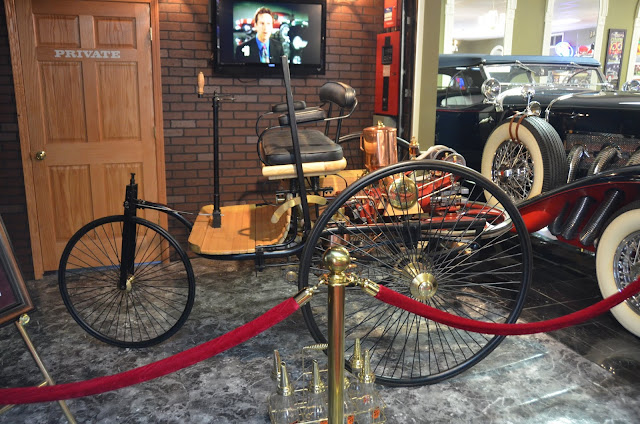