VIDEOMAKER TOM GRIGAT ASKS: IS THIS THE FIRST-EVER BATMOBILE? 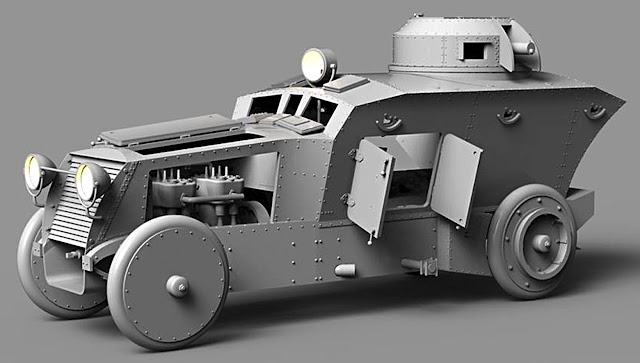 HERE IS ANOTHER excellent video from Tom Grigat, whose YouTube subscriber count is currently not far short of 50,000. That's pretty cool, Tom, and we hope your fanbase keeps growing!

SMN report: Tom reckons the model reminds him of an early Batmobile. That’s an interesting thought, though reality is just as fascinating, and is fact rather than fiction.

The Romfell Panzerwagen was a 1915 Austro-Hungarian armoured car, which had an unusual inward-sloping body, designed to deflect enemy fire downwards.

It was designed by Hauptmann Romanic and Oberleutnant Fellner, who combined their surnames to create the Romfell brand name. Their creation had an air-cooled machine gun in a pillbox-style turret. Overall, the Romfell seems like an excellent design, even if it’s likely that only one was ever made.

The kit is made by US manufacturer, Copper State Models (CSM), which specialises in World War I-era models. The Romfell has transparent headlight parts, full engine and interior detail, and comes with decals by Cartograf of Italy. The kit is made to military-kit standard 1:35 scale.

The Romfell’s unusual design also lends itself to a Steampunk theme, and this is what we would probably do with it. Or stick with Tom’s thoughts, and go for a Batmobile look. Either would look great, and made to 1:35 scale, the Romfell is big enough to make a mark at model shows.

Congratulations to CSM for tackling such an unusual subject. 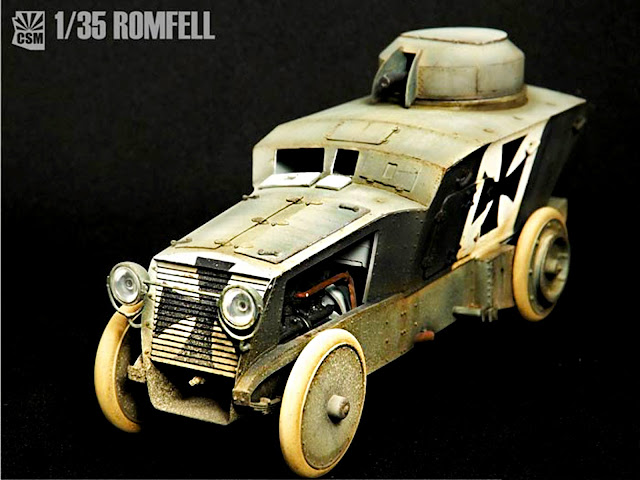 Photograph (below) of the original machine, as seen in 1915. 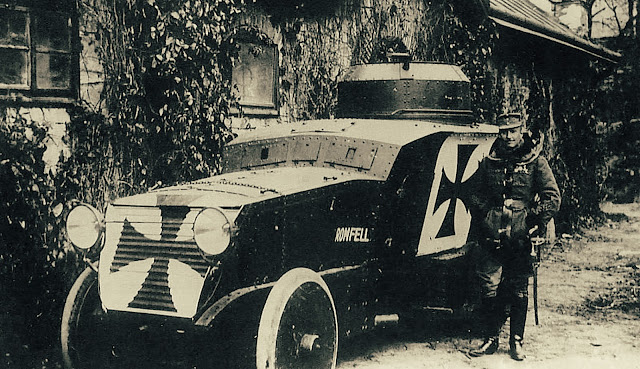 And here's the excellent Tom Grigat production (below) who manages to pack in huge amounts of skill and care in making his popular videos.

Copper State Models has a neat logo (below left) which includes a graphic outline of Arizona, where the company is based, plus the colours and fan pattern of the state flag. The vehicle shown is another CSM product, the Lanchester (an old British make) armoured car. Note the bottle and kettle!