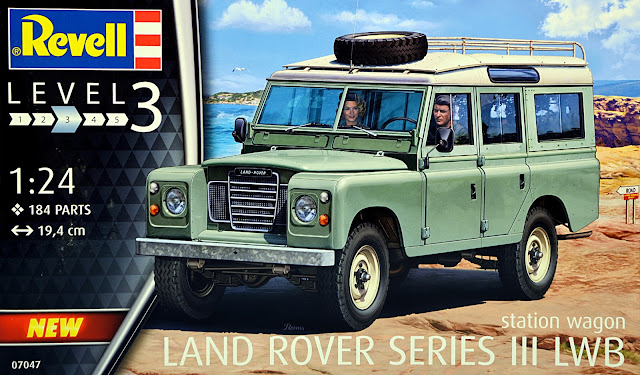 THE LAND ROVER IS ONE OF THE WORLD'S best known off-road vehicles, and is found in every country. But considering this widespread popularity, kits of the original Land Rover to 1:24/25 scale have been few and far between. In the military scales of 1:35 and 1:72/76, yes, but to the standard car scale, no.


Mat Irvine reports: But now Revell has come to the rescue with a brand-new kit of one of longest-running Land Rover types, the Series III Long Wheel Base (LWB), otherwise known as the ‘109’ for the number of inches in its wheelbase.

Revell could have reissued the old ESCI kit (now Italeri). But that kit is getting a bit long-in-the tooth, so instead Revell opted to make a brand-new tool.

Overall this is an excellent kit, although there are a couple of anomalies, more of which later. The model is fully detailed, complete with chassis, engine, running gear, interior, and bodywork.

There are various assembly options, depending on what configuration you wish, and you have to decide on most of these before commencing the build, as holes have to be drilled.

I found some options were slightly confusing, and in some cases I was not sure which holes refer to which option.

The major option is whether to assemble a right-hand drive (RHD) or left-hand drive (LHD) version. Here the main changes are different dashboards, some areas under the bonnet, and the layout of licence plates at the rear.

The driveline brings in the first small error, as Revell suppies two transmission tunnels – supposedly for RHD and LHD versions, where the low-ratio/4WD drive levers swap sides. But this doesn’t actually happen. The transmission tunnel marked ‘LHD’ is identical to the RHD.

Although Land Rover swaps steering wheel and instruments across, and the hand brake, depending on the side of the drive, the shift levers stay in the same position. This is because the chassis was designed and built as a RHD layout and moving to LHD this aspect didn’t change, so the transmission levers are in the same place. In the real thing, you have to be stationary to shift into low, so a LHD driver just has reach over a bit further.

What Revell shows as the ‘LHD’ transmission tunnel is the same as RHD, so part number G20 (supposedly for the RHD) can be discarded; part 19 is correct for both LHD and RHD.

The other choices are with the seats where there are four main options, and a couple of minor ones. The LWB Land Rover can take 12 people, six in two rows of three, and three more per side on rear bench seats over the rear wheels.

The Revell kit also allows a choice of three different external rear-view mirrors, and a large roof rack can be fitted. The spare wheel can be stored on the roof, though many carry it on the rear door. It’s not in the instructions, but you could just drill holes for this.

The engine is a petrol unit, and features a host of details. The chassis has positionable revolving front wheels.

The chassis is where the other irritation comes to light, as the springs are too thick. The front steering setup is also arguably simplified, but it actually makes this substantial and strong, so maybe not too bad. And once assembled, the over-thick springs are not really apparent.

The bodywork itself is excellently done. All windows are crystal-clear and are a perfect fit. The edges need painting black, and it is easiest to paint the recesses in the bodywork, then fit the glass in with a ‘watchmaker’ glue that doesn’t dissolve paint. The only exceptions are the two roof-mounted windows, where the frames themselves really need painting.

Components laid out (below), all 184 of them, plus decal sheet. 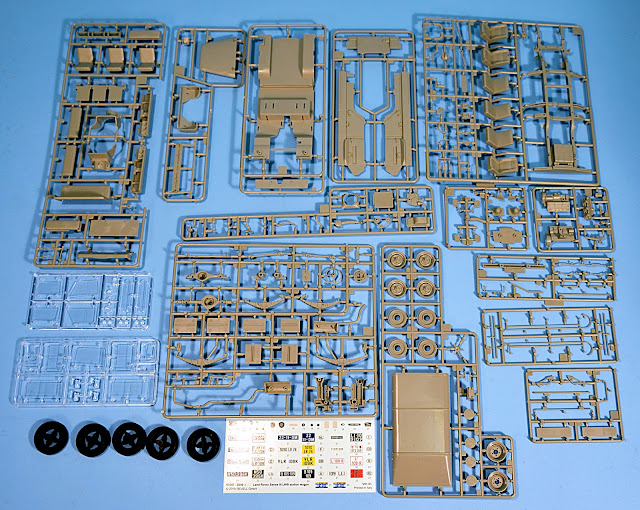 Full-colour instruction booklet (below) is clear and well-produced. 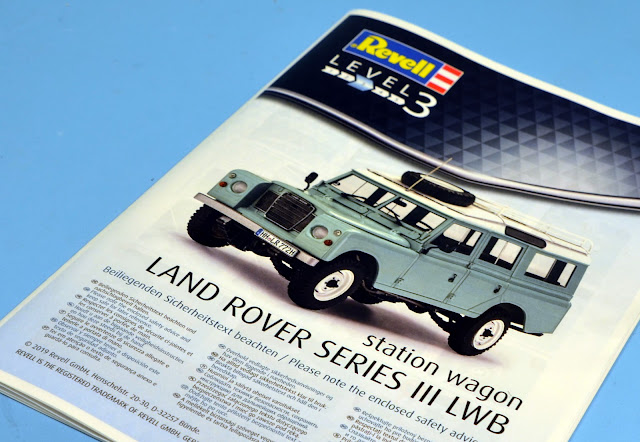 To paint the vehicle, I first sprayed the roof with Humbrol Gloss White. For the bodywork, Revell has opted for a classic Land Rover scheme, the light blue-green shown on the box. This is Revell 39 Light Blue Matt, which you need to coat with a layer of clear gloss varnish.

The shade may be authentic, but it’s a bit drab, so I painted the review kit in Testors 2966 Bright Light Blue. It’s close to another stock Land Rover colour, Marine Blue, which looks much better. I also sprayed the interior floor pans in the same blue, with satin black for the door panels.

General component fit is excellent, and the instructions are mostly straightforward. There a few places where I scratched my head a little, such as postitioning the battery.

Decals include small ones, such as the shift pattern on the gear stick knob, and others for the engine and its compartment, plus the side-mounted air intake. A host of worldwide license plates are included, including old- and new-style UK and Irish plates.

The interior (below) shows the correct transmission tunnel for both right and left-hand drive shift levers. 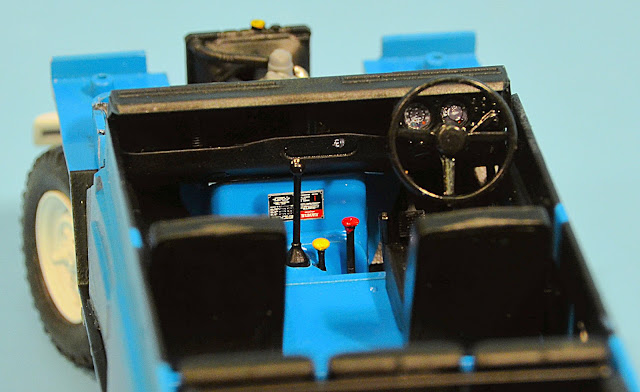 The redundant transmission tunnel (below) supposedly for the RHD version. In fact, both left and right hand drives are the same 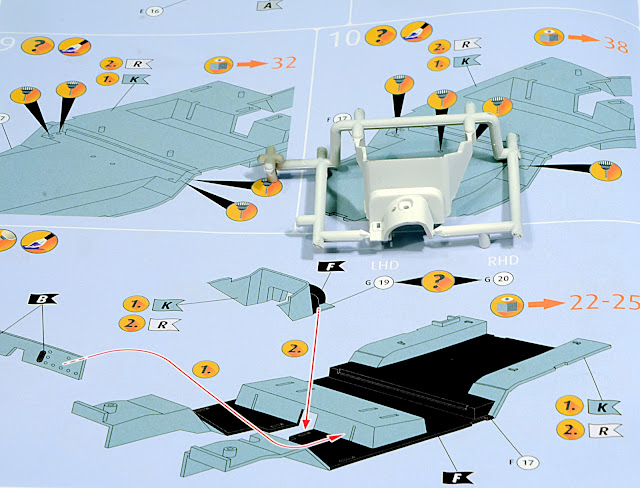 Closeup of the engine bay (below). The air intake and battery still have to be fitted. 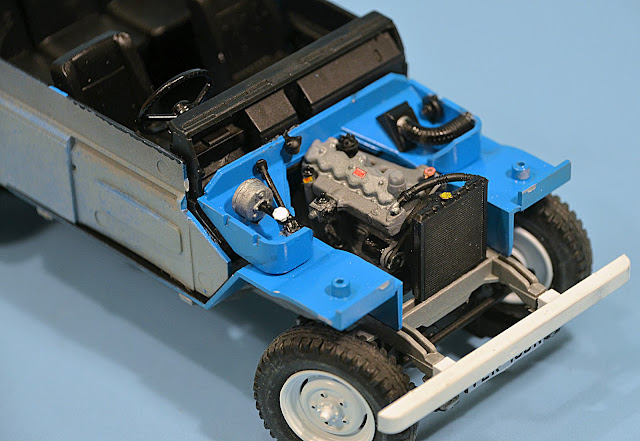 The underside (below) shows the somewhat over-thick springs, but when the vehicle is upright, they are not apparent.

Various views (below). I painted the the front bumpers white, to match the wheels. The instructions indicate aluminium, but bumpers come in all shades. 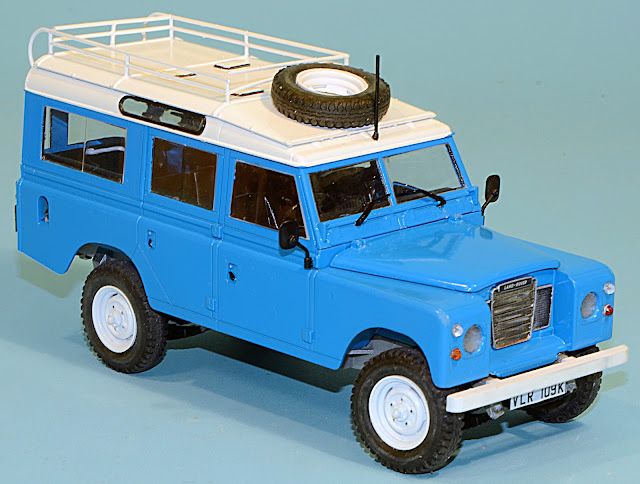 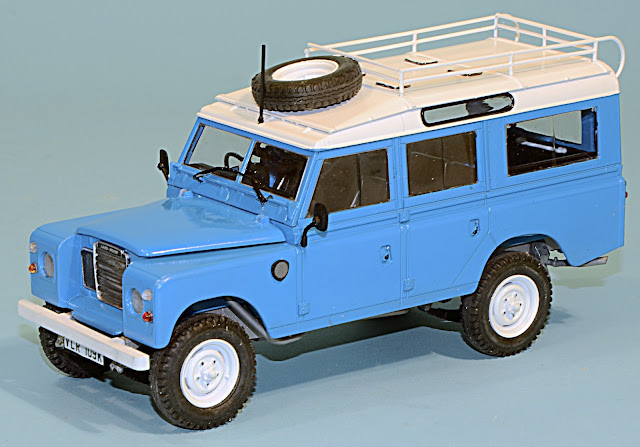 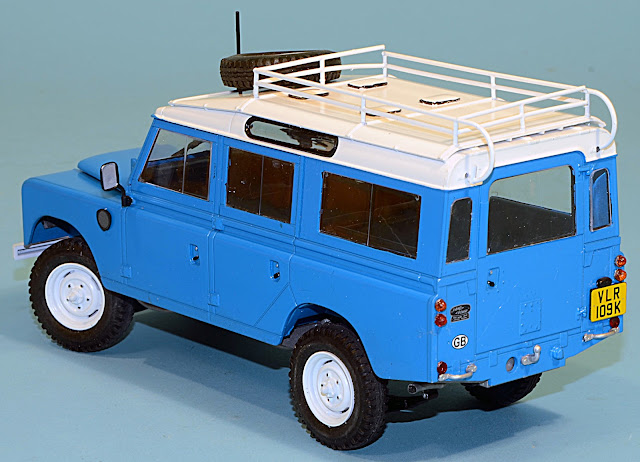 Inside the engine compartment (below). The air intake is in position, and the battery is installed underneath, though you cannot see it this shot. 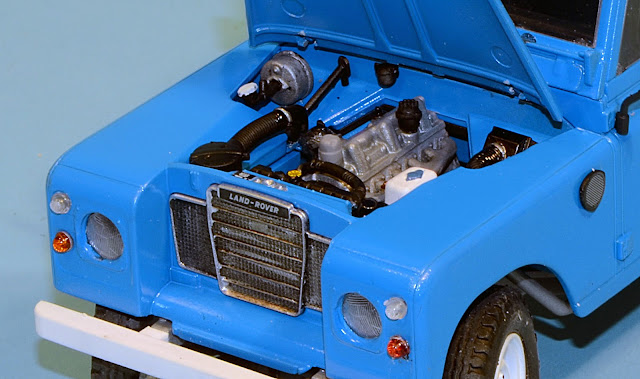 Summation
Apart from the issues mentioned above, this is an excellent kit that assembles to make a fine detailed miniature.

Thanks to Revell for the review kit