BRAND-NEW 2021 FORD BRONCO, AND A REVELL BRONCO FROM AN EARLIER ERA

OFF-ROAD DRIVERS rejoice, for the 2021 Ford Bronco is due to be revealed next week. This will be the seventh-generation Bronco, even though the line ceased production back in 1996. For scale fans, a 1970s-era Revell Bronco is available in 1:25 scale.


SMN report: For scale modellers, various Bronco kits have been released down the years, though this  version depicts a Bronco classic from the the model’s early days.


Click here to see an in-depth review of the Bronco by Mat Irvine. 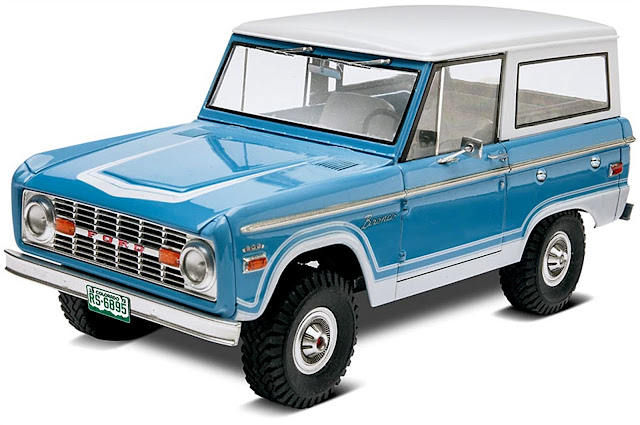 The assembled model is a fair representation, though as with all 1:25 plastic kits, it feels rather insubstantial when compared to a diecast equivalent. We like to add weight with hidden lead shot where possible. In a vehicle like this you could fill the rear compartment with shot, hiding it under a tarpaulin.

And here's a review of the kit (below) from YouTube channel SMKR. It seems to be quite a decent model, though the baby-blue paint scheme in particular makes it look a distinctly soft off-roader. Our bet (and hope) is that the 2021 Bronco due for full reveal on July 13, 2020, will have a hunkier and chunkier look altogether.