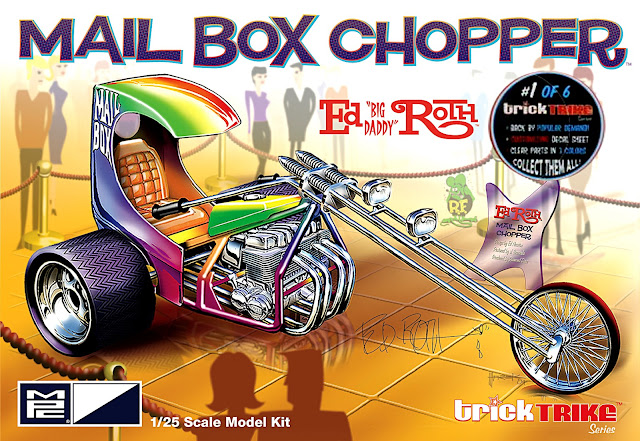 THIS IS A CHOPPER-STYLE motorcycle trike, one of a six-strong 1:25 scale range, first issued by MPC in the 1970s.

Mat Irvine reports: Kits of motorcycles (two or three wheels) are not unusual, but they are mostly in large scales such as 1:12 or 1:8, because bikes are mostly smaller than cars. This kit and others in the range are unusual in that they are moulded in the traditional 1:25 car scale. The Mail Box Chopper is a custom design, with unique bodywork, and rear wheels and tyres that wouldn’t look out of place on a dragster.

The Mail Box Chopper’s cab comes in two halves with a single seat, but the kit’s Honda 750 cc four-cylinder engine is what takes the most building skills. There are a number of small plated parts, which require the chrome to be scraped away so that components can be cemented together. However, the rest of the chrome (such as the cylinder head area) is ideal for over-painting with transparent paints to give different effects. The engine itself is sandwiched between the two chassis rails, which incorporate the front fork with its single motorcycle wheel and tyre. On assembly, you have to be careful with cement to make sure the wheel can steer.

As with many current AMT and MPC kits, the transparencies are supplied in clear, plus two transparent shades. Here the colours are orange and green (a 2005 issue had red and blue), so choose what you want for the tiny rear window and lamp glass. Then you need to decide which decals to use, as the choice is a wide one, even if the original Mail Box Chopper had only its name down the cab sides. Now though, you could add ‘Roth-appropriate’ decals.

The Mail Box Chopper latest box (header pic) has an updated MPC logo, and a ‘Number 1 of 6’ sticker on the box. The 2005 package (below) was slightly smaller. 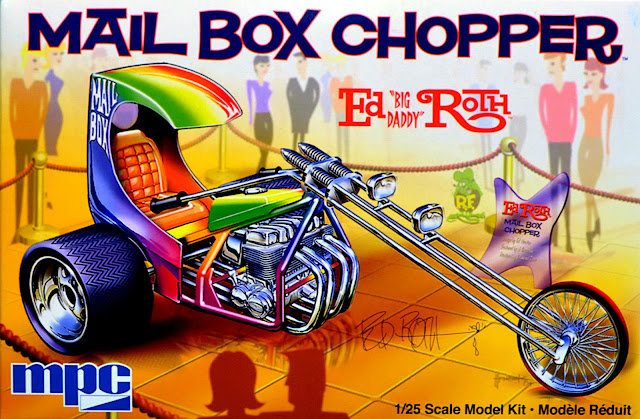 Mail Box Chopper parts (below) also included a cartoon postcard you got in the 2005 release, unfortunately not included this time. 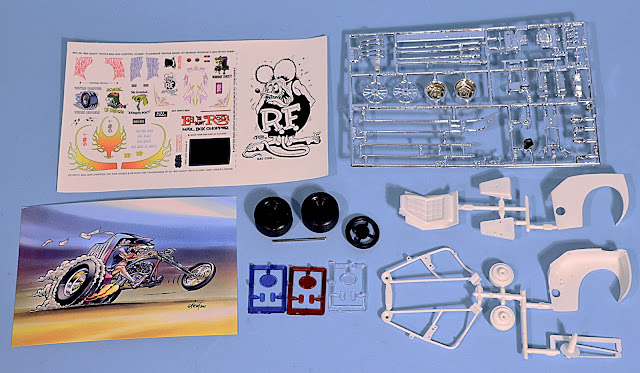 Mail Box Chopper has a comprehensive decal sheet (below), the only problem you may have is choosing just what to use. In fact, the original full-size Mail Box Chopper carried only the name either side of the cab. 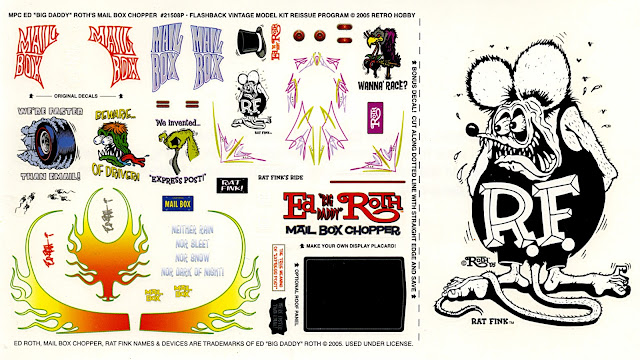 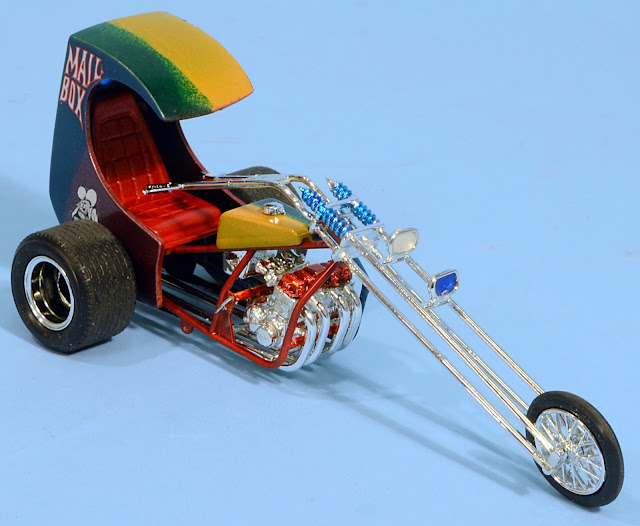 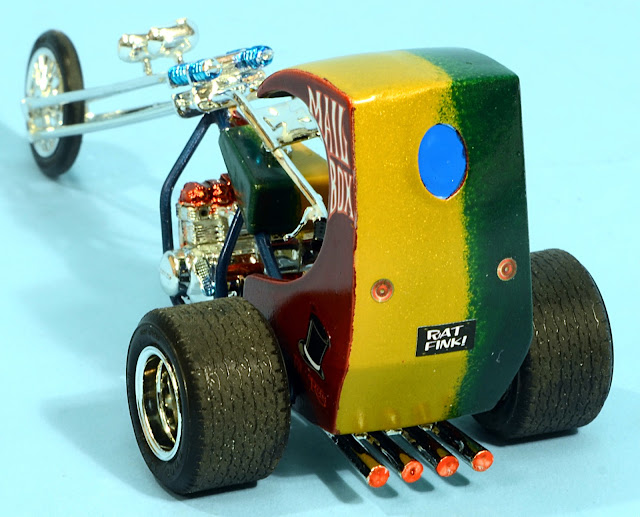 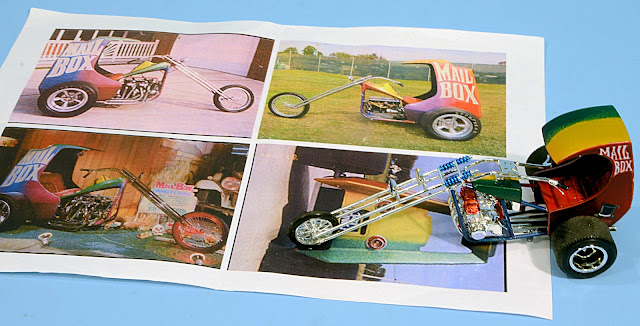 Mail Box Chopper (below right) partnered with the same-scale Taco Trike. Watch out for the Taco Trike in an upcoming SMN.

About the real thing
The Mail Box Chopper is a mixture of ideas, being based on a drawing by a colleague of Ed Roth, Ed ‘Newt’ Newton, for use in Roth’s Choppers magazine. The build was then started by fellow customizer, Jim ‘Jake’ Jacobs, but he grew disillusioned halfway through, so Roth took over and finished the job.

But although the MPC kit is named Mail Box Chopper and credits Ed Roth as creator, in reality it doesn’t really match the 1:1 real-life version. The kit bodywork isn’t quite the same shape and most strikingly, the original engine was a British Crossley straight-four car engine. In fact, Ed had a thing about British car engines, as his Surfite was powered by another Brit, the engine from an Austin Mini 850.

Summation
Even with various differences between the kit and the real thing, I found that judicious use of various shades of Testors metalflake paint gave a reasonably life-like Mail Box Chopper model. The parts fit well, assembly is not difficult, and the result can be displayed along with a car collection.

SMN note: The Mail Box Chopper retains its name from 1974, being advertised as an Ed ‘Big Daddy’ Roth vehicle. Ed had a passion for bikes and trikes, probably more than cars, though his best-known creation is probably the wildly-staring Rat Fink (below). 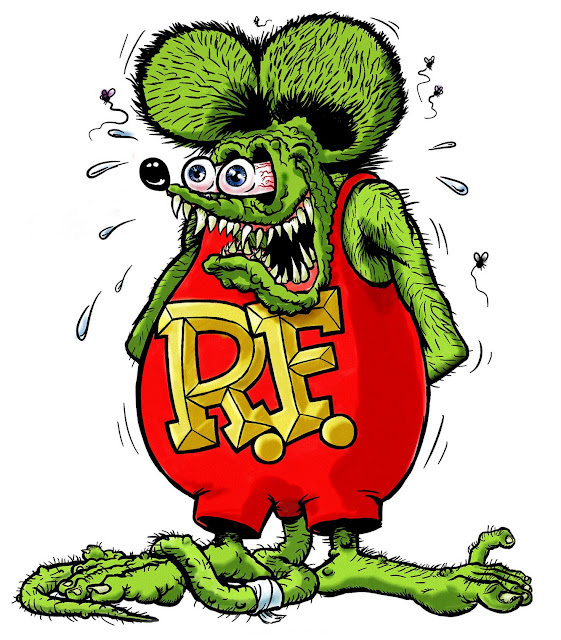