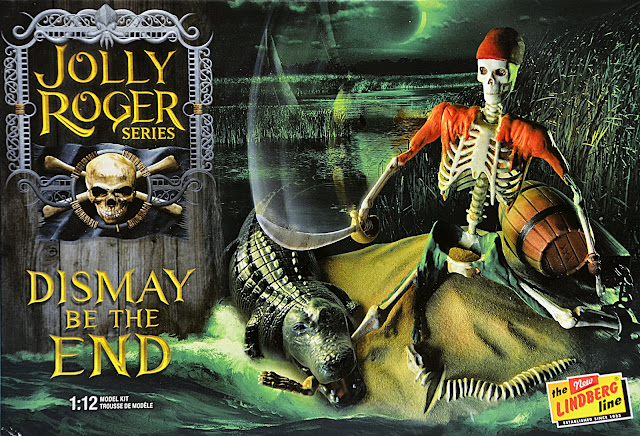 IN THIS TIME OF viral doom and gloom, we all need something to cheer us up, so about a model of a guy about to have his leg bitten off by an alligator? Well, maybe this 1:12 scale kit is not as bad as it sounds.

Mat Irvine: The model is a new version of a 1972 MPC kit, one of a series of seven. It's now released by Round 2 as a kit from the New Lindberg Line.

The poor skeletal soul is sitting on the obligatory island, one bony leg in a manacle, the other in the jaws of an alligator. But the (ex) pirate has a trick up his sleeve (what remains of it), in the form of a large cutlass about to swing down on the unfortunate reptile.

The ex-pirate's swing-action is a working feature of the kit, thanks to a wind-up elastic band, with a push-switch at the back.

The parts count amounts to only two dozen components, so there’s not much to assemble, though fitting the moving arm is slight tricky. The rest goes together easily, and includes a barrel and assorted bones. The finish is then down to painting, and the box-art gives a good indication of the route to follow.

The original MPC series was actually licenced from Disney, and came under the overall title ‘Pirates of the Caribbean’, based on a theme in Disneyland. In the intervening years, the POTC name has been hi-jacked by a small movie franchise, so the title is now the ‘Jolly Roger Series’. There has also been a change of name for this particular scene, from the original ‘Condemned to Chains Forever’ to ‘Dismay Be The End’… Try reading it aloud to get the full impact, whichI assume was the intention.

The box base (below) supplies useful information, especially for painting hints. 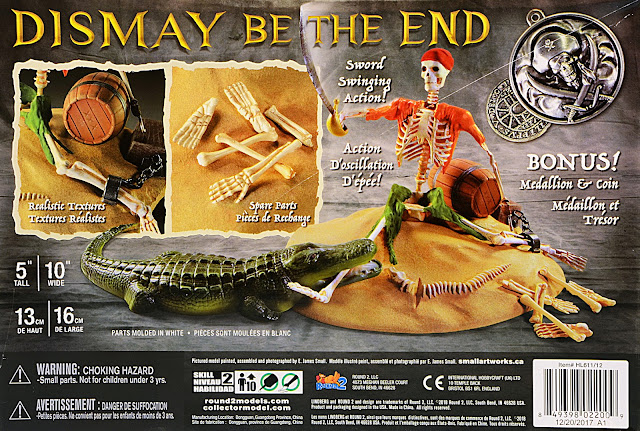 The parts (below) number just 24, including a coin and medallion (lower centre). And yes, an elastic band is also in the box, its job to power the skeleton's arm in a cutlass-swinging action. 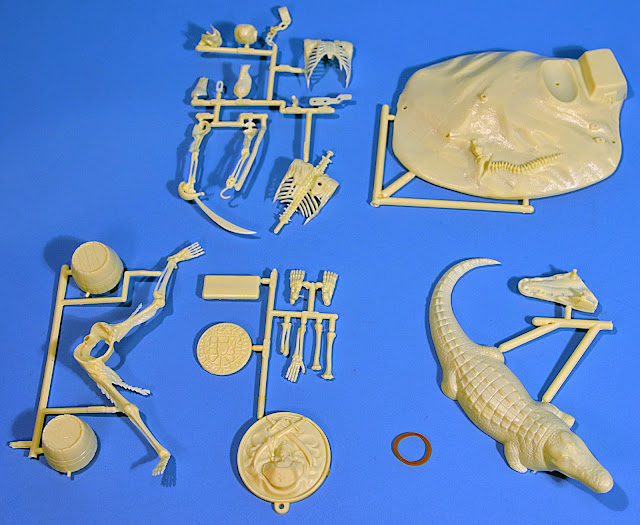 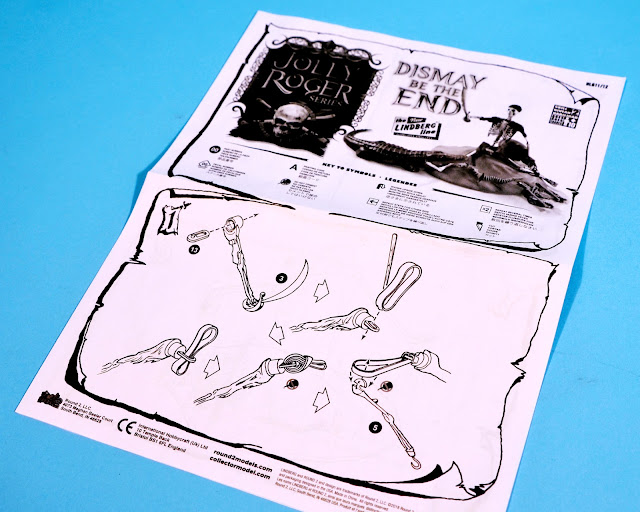 The completed model (below) has great scope for applying paint washes to get that authentic skeleton-pirate-in-rags-on-a-treasure-island feel – not to mention the alligator. And yes, the creature is an alligator, not a crocodile, as it is moulded with a flattened nose. 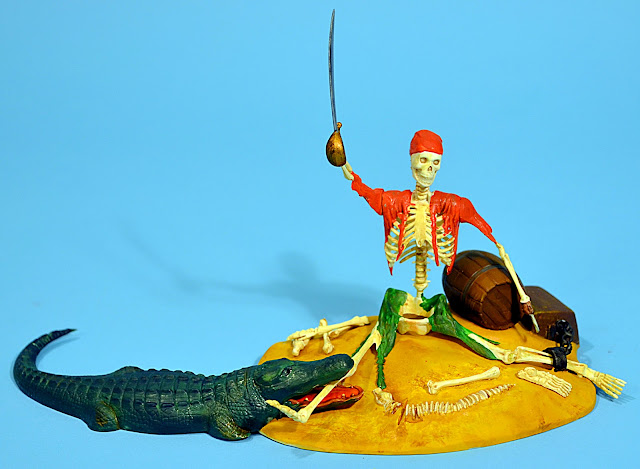 And here (below) the skeleton's cutlass is shown in the ‘down’ position. 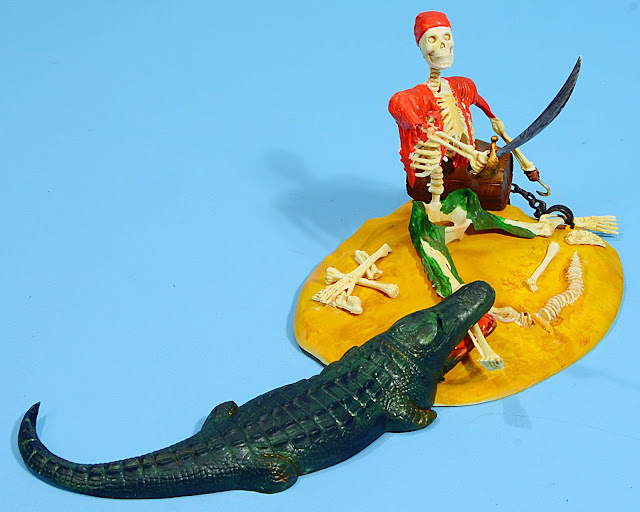 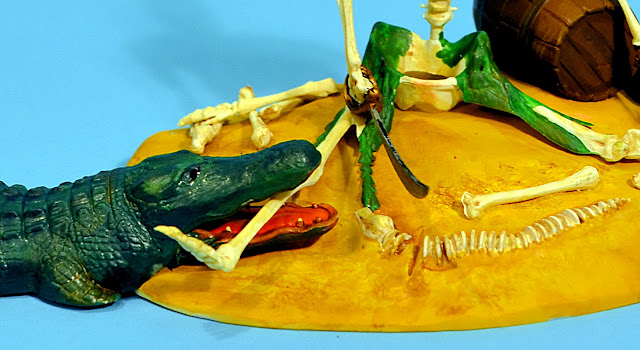 A medallion and coin of the era (below) are also supplied. Finish these by painting them black, then dabbing aluminium paint on a rag and wiping it gently over the raised areas. It's the equivalent of dry-brushing and is an easy to apply and very effective technique. 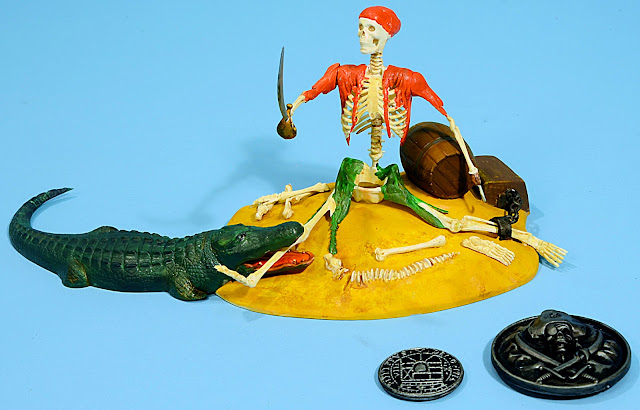 Summation
Whatever the name of the kit, the result is the same – a nicely produced and easy to build model, complete with working feature.

Thanks to Round 2 for the sample kit

The original MPC kit (below) taken from the 1974 catalogue. The new box art is certainly more striking 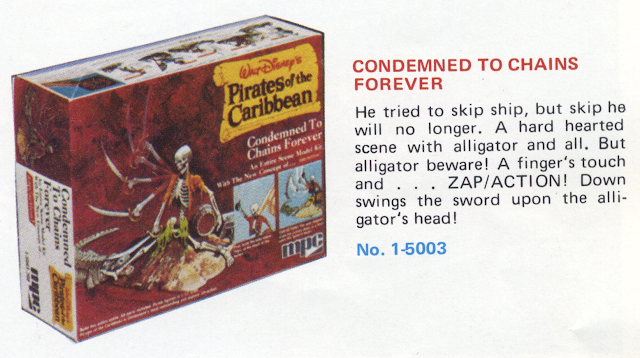 And here's a trailer (below) for the 2003 movie The Curse of the Black Pearl.