This week in 1962 – actually September 23 – saw the first episode of the Jetsons, a US cartoon TV series featuring a ‘space age’ family living in the Orbit City of 2062.

Mat Irvine: 75 episodes of the Jetsons were made by Hanna-Barbera Productions, who also made the famed Flintstones cartoons. The Jetsons featured family man George, his wife Jane, their children Judy and Elroy, and the family dog, Astro.

The family’s main form of transport was George’s flying car. Remember this was written at a time when we all reckoned that in the future there really would be a such a machine in everyone’s driveway. However, it took until 2001 for the first model kit to appear of this car, from Polar Lights. It was one of the company’s simpler kits with snap-together pre-coloured parts, and all five family members.

Twelve years later, the kit was reissued in a different box, though this time with only two of the figures, George and Astro, and these were pre-painted in a different pattern to the original.

But that isn’t quite all for the Jetsons in scale model form. Probably in the 1960s, so coinciding with early Jetsons shows, the little-known Japanese company Giant (possibly linked to Gakken or G-Mark), issued a lunar car (below) complete with two bubble canopies and caterpillar tracks. However, the vehicle (literally, 'Character Space Family Expedition Car') seems to be a unique design, as, apart from the bubble canopies, it didn’t match the Jetsons car at all. Perhaps the Giant designers based their creation on pre-production art from Hanna-Barbera. 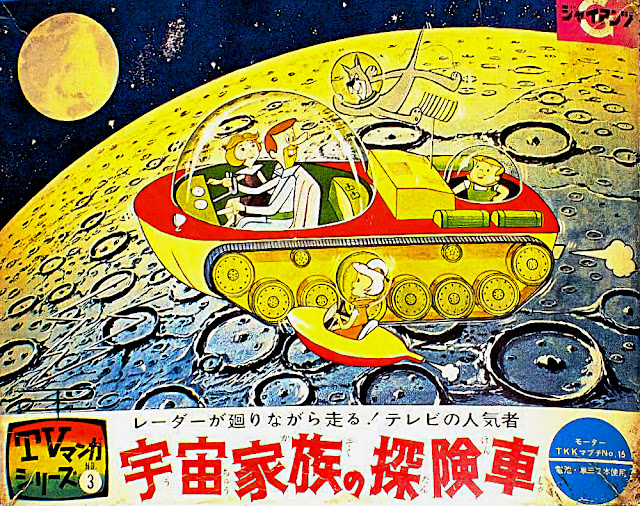 The first 2001 box for the Jetsons (header pic) was called the Jetsons Spaceship. The kit contained all five family members. The 2013 release had a new box, but with only the George and Astro figures. The vehicle was renamed the Jetsons Capsule Car. Both versions of George are shown in the pic (below), with 2010 (left) and 2013 (right). It’s the same moulding, but different colour schemes. 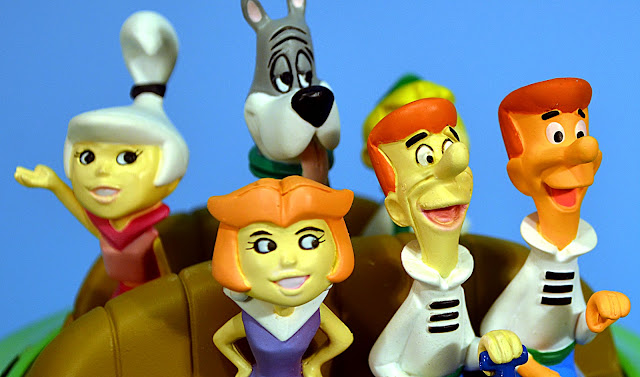 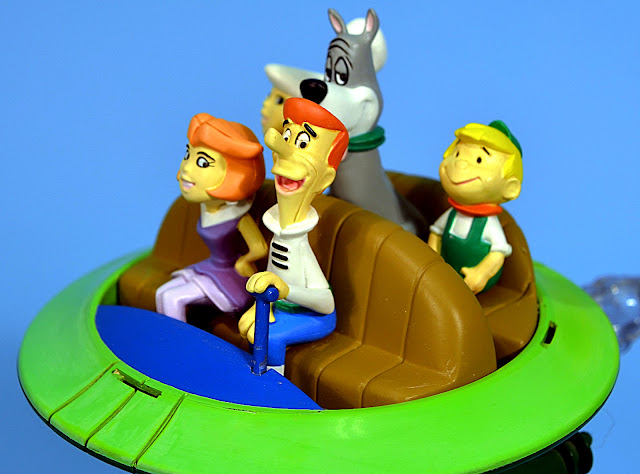 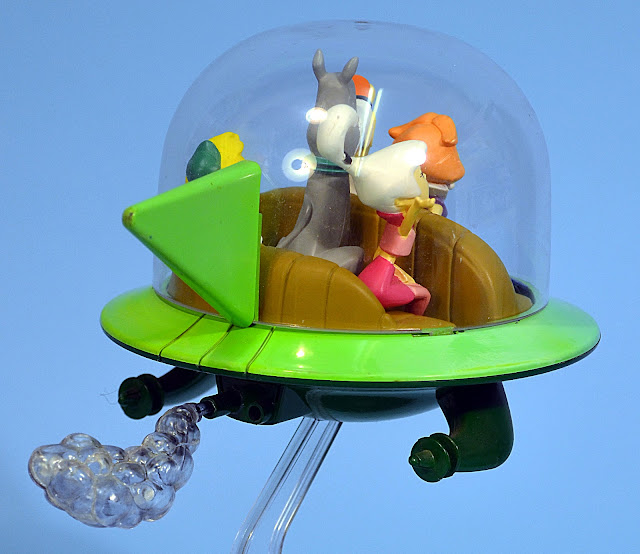 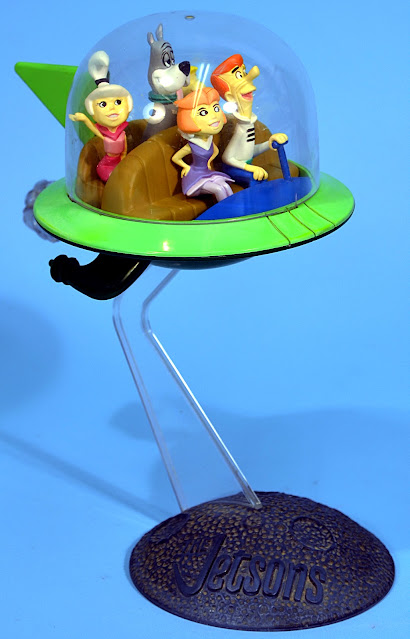 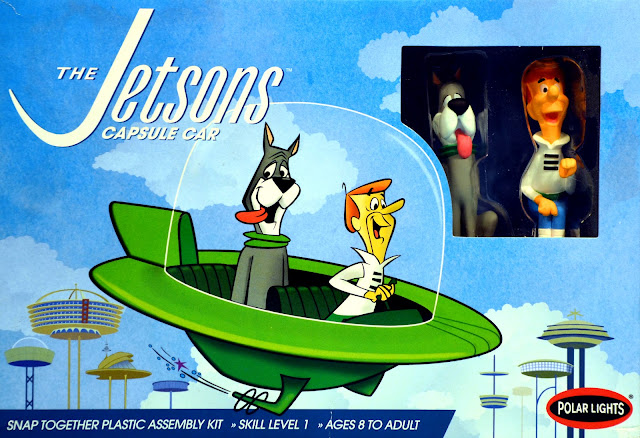 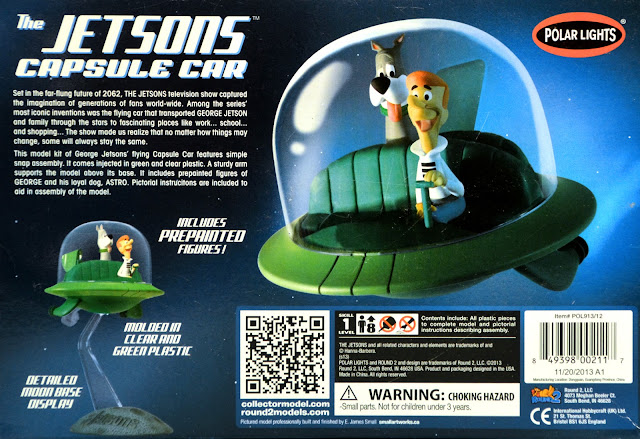 SMN note: The look of the Jetson world (pictures below) has now become a classic futurist style, known as Googie (not quite the search engine!). Wikipedia says that Googie was influenced by car culture, jets, the Space Age, and the Atomic Age. It originated in Southern California having been influenced by the streamlined machines of the 1930s, and was popular in the US from 1945 to the early 1970s.

Googie was especially popular for motels, coffee houses and gas stations, and was named after a Hollywood coffee house, designed by John Lautner. Other names for the style include Populuxe and Doo Wop. 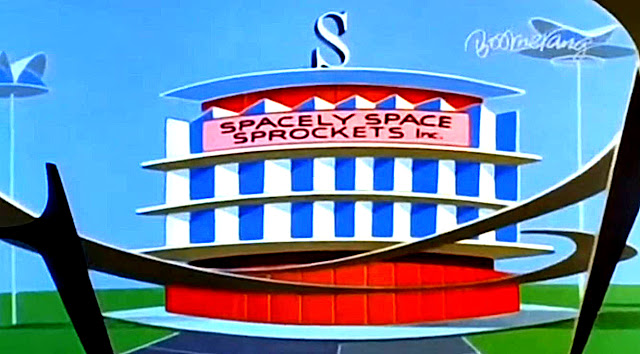 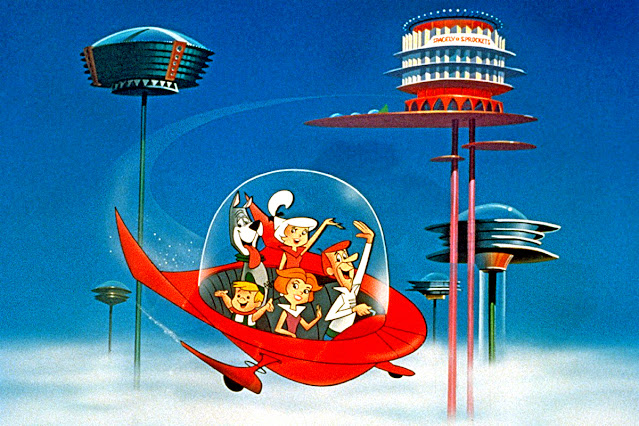 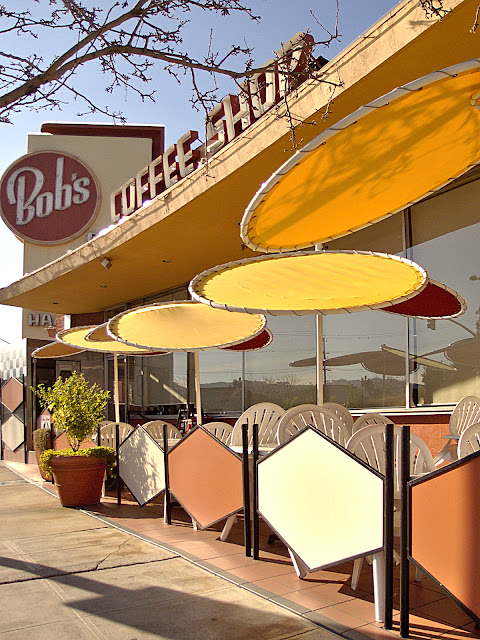 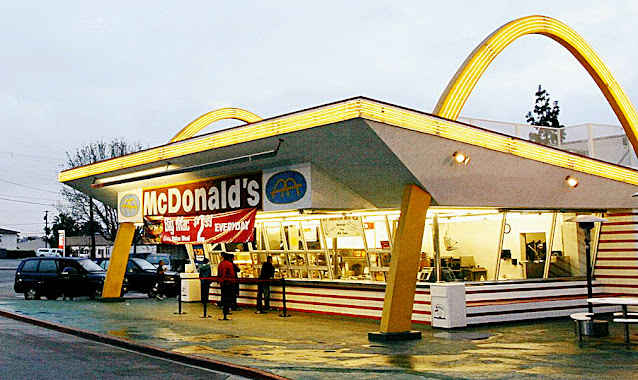 Just as had already been the case with Art Deco (in the UK, Victoriana also suffered), Googie was largely dismissed by so-called experts, and many buildings have been destroyed over the years. Some have survived though, including the oldest McDonald's stand, in Downey, California. The original was demolished in 1984, but has since been rebuilt as a working replica (above) complete with neon-lit golden arches.

Click here for more about the Jetsons at SMN.