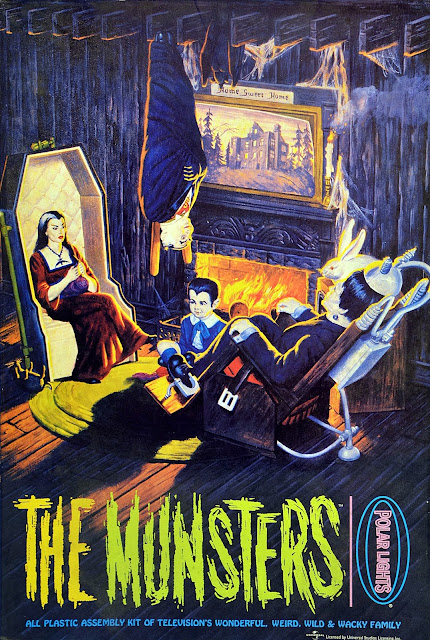 IT’S HALLOWEEN AGAIN and here’s a chance to look at a kit that definitely fits the idea of ‘spooky.’
Mat Irvine: I’m in the process of writing a book on dioramas, and for one of the chapters there’s a look at kits that already come as a diorama. And this kit from Polar Lights certainly fits the bill.
The Polar Lights model started out as an Aurora kit way back in 1965, but was on sale for less than a year. Most Aurora tooling originally ended up with Monogram, and Monogram did reissue some kits, but nothing like the whole of the range. Some tools were also licensed to other companies, so we did see again kits that Aurora had made, but which hadn’t seen the light of day for many years.
Then we jump forward several decades, and the idea of ‘lost Aurora’ model companies started to emerge. Only two ever really fulfilled the promise though, those being Polar Lights and Moebius, which have created kits that Aurora might have made, but that it actually did not.
However, although much tooling did survive, so could be re-used, other moulds had long gone. When Aurora was at its peak, the idea of ‘collecting old kits’ hadn’t been invented, and almost certainly no-one had even contemplated it. Modellers wanted model kits that were new, new, new all the time. So when many Aurora kits had run their course, the tooling was scrapped. The frame was reused and, as many of these kits were not cut in steel but cast in beryllium, that could be melted down and reused. Even the kit reference numbers were often recycled!
This model kit – officially ‘The Munsters’ though more generally known as the ‘Munsters’ Living Room’ – was one of these, but in 2012, Polar Lights recreated the tooling by reverse-engineering an original kit, and reissued the model.
But the whole idea of the kit is slightly odd - and that doesn’t just apply to the occupants of 1313 Mockingbird Lane (the Munsters’ fictional address) as the kit as issued never really existed. Yes, the Munsters had a living room, but it didn’t look like the Polar Lights kit. Herman didn’t use an electric chair for relaxation, Lily didn’t have a coffin-shaped chair, and Grandpa, although he may have hung from the rafters for a nap, had his own place in the basement, not in the living room. So the whole kit has been an odd creation.
Kit historian and for many years a project manager with Aurora, Andy Yanchus, recalls, “Near as I can remember, that kit went into production just before or right after I started working at Aurora. So development work would have begun way before I arrived. In fact, the catalog sheet announcing this kit and the Addams Family House (see pic at bottom) carries 1964 copyrights, but I joined Aurora in October 1965.
“The really interesting fact about the catalog sheet is that it’s the only Aurora paperwork I’m aware of that shows the Munsters kit. The kit never appeared in any Aurora consumer catalogs!  The Addams House did, but not the Munsters. Talk about a short life!”
So far as the kit itself is concerned, it consists of the living room, with a cosy cobweb-strewn fireplace next to which Eddie sits on a cushion, with his Woof-Woof doll. Another oddity is that he’s called ‘wolf boy’ in the reproduced Aurora plans, while everyone else has their correct name.
Lily is knitting in her casket-shaped chair, while Herman recharges his batteries in a comfy electric chair. Grandpa hangs from the rafters, accompanied by a bat. Other animals are a white rabbit that sits on top of the TV cabinet and a couple of playful rats. Peel-off decals supply the Home Sweet Home picture over the mantelpiece, and an image of Herman’s face for the TV screen.
And another oddity, just why did Aurora make the Addams Family house – advertised as Andy says, along with this Munster kit – but not a matching kit of 1313 Mockingbird Lane? Instead, we have just the interior! It took half a century for a kit of the matching house exterior to be made, this time by Moebius. But then again, life would be dull without such modelling idiosyncrasies and oddities.
Happy Halloween! 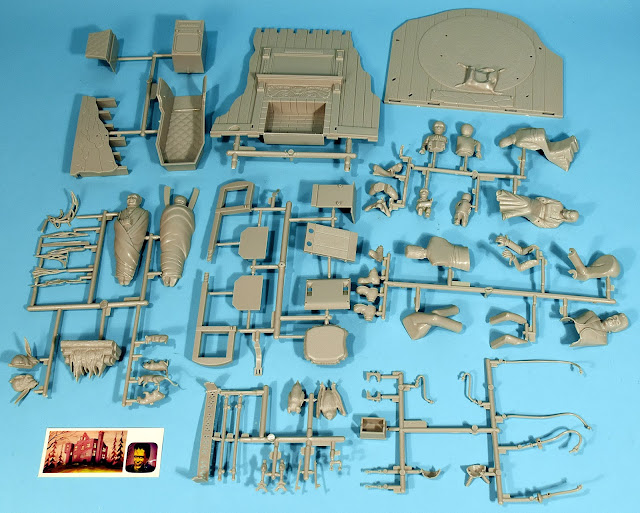 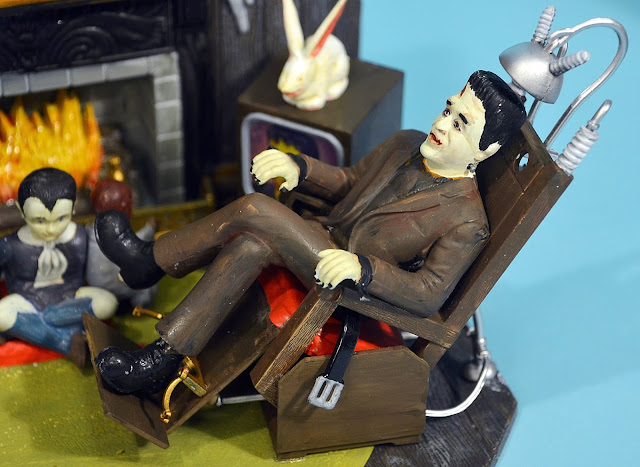 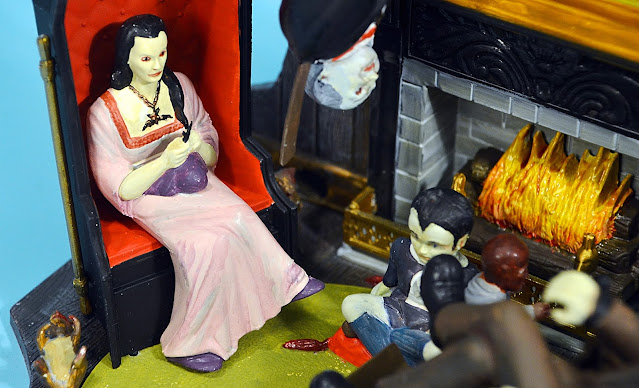 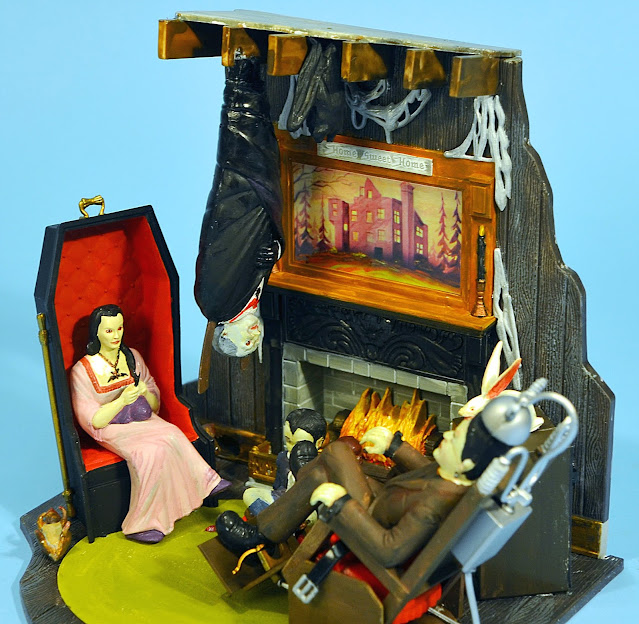 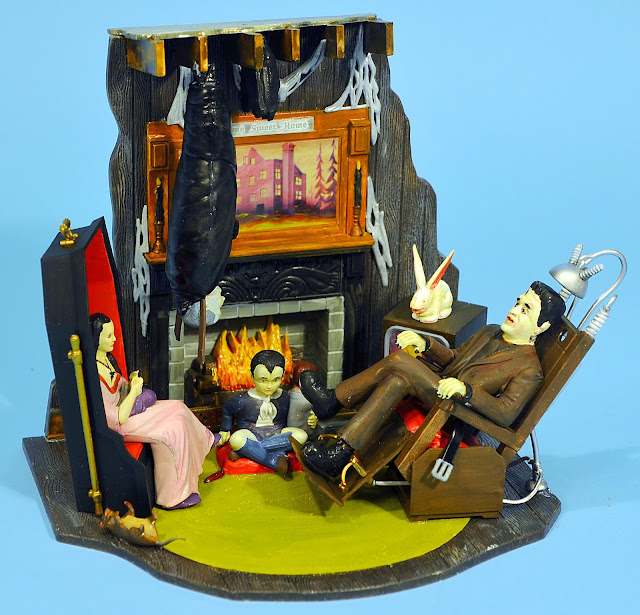 Building the room setting (pix below). There’s great scope for applying weathering. However, the overall colours are very much guesstimates, as the original series was shot in black and white. 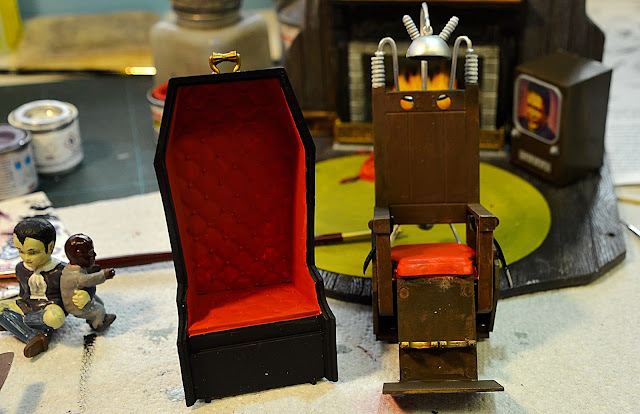 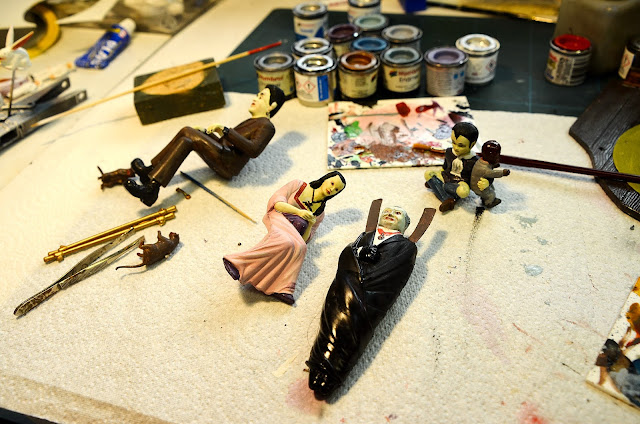 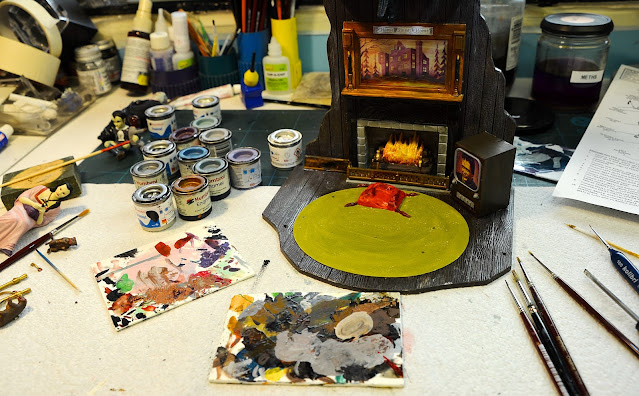 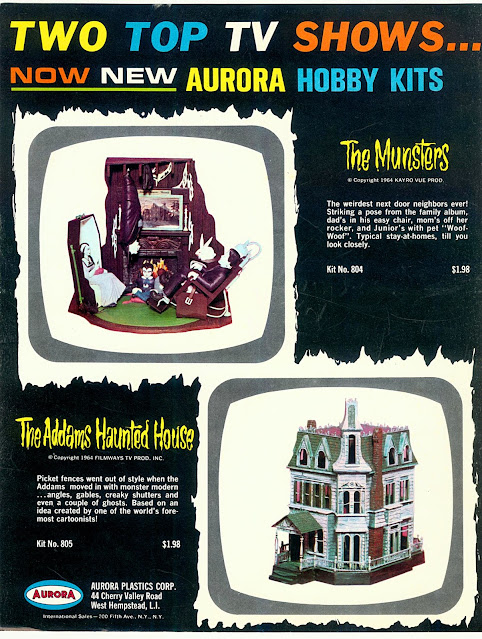