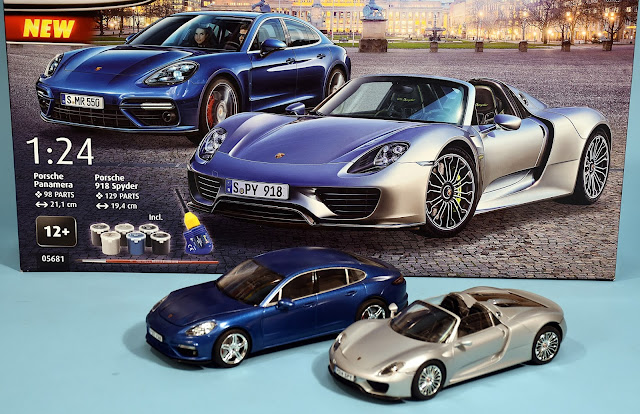 THE OTHER HALF of this 1:24 scale Revell Gift Set, the Porsche Panamera, has already been dealt with in SMN, so now here's the other kit in the box – a Porsche 918 two-seater.
Mat Irvine: The Porsche 918 Spyder is a hybrid vehicle, with two electric motors and a V8, though perhaps oddly, the mixed-power layout is not discussed in the kit information. The 918 Spyder was a prototype, but built with the idea it could go into production. Given the price – $845,000 – this was likely to only be a very limited edition, and even a cup holder had to be a special order, at $949. The 918 was available only from 2013-15.
The kit is one of Revell’s ‘new style’ car kits in that the transmission and wheel assemblies are simplified, not to reduce external detail, but to give the completed model a more solid structure. When compared with the Porsche Panamera, the 918 has more parts (129 vs 98), and there is more detail in the V8 engine and electric motors. But, as with the Panamera, much structure detail is hidden from view once the car is assembled.
Although there is an electric motor that can drive the rear wheels, separately or with the petrol engine, it’s not really apparent where it is in the model, though it actually sits behind the main V8, in line with the rear wheels. The front electric motor is more obvious, though it can’t really be seen at all once the body is in place. Even so, it’s nice to know it is there! The petrol engine can be viewed through the rear engine hatch, actually a mesh grill supplied as a decal. Incidentally, the real car can travel purely on electric power, but only for 19km (12 miles). Mind you, it can do 0-60 mph in six seconds, just on electric. But if you add the 9000 rpm, 4.6 litre V8, that acceleration time drops to 2.6 seconds.
What of the kit’s wheels? They include large disc brakes, tucked inside a multi-spoke design. The front and rear have different sized tyres, and here’s a point I’ve not seen in other car kits. Model car tyres are normally a tight push-fit over the wheels, so there’s no problem with them staying in place. On the 918, Revell  has supplied vinyl tyres that are fractionally larger than the wheels. They need a spot of cement – clear contact, or superglue – to ensure they stay fixed in position.
The interior has seats, door panels, and instrument-panel decals for the various dials and the video display, which has two options. There are also decals for the tops of the doors and instrument panel that depict a carbon-fibre pattern. Note that the Porsche 918 was available only in left-hand drive form, even to right-hand drive countries.
The rear spoiler slides into the rear bumper-pan structure and is designed to be raised or lowered. In reality, the spoiler only lifts when the 918 moves above a certain speed, so for a static model like this, it’s probably best to leave it retracted. However, if you do want to raise and lower it, you can leave the rear bumper pan loose, as it is a pretty good fit without cement.
Overall, the Revell Porsche 918 kit assembles to make an excellent model, though I could argue that the car isn’t a Porsche ‘as we know it.’ Yes, it is a two-seat, rear engine (technically mid-engined), sports car, as was the 911, but that’s really where the similarity stops. Compared to the 911, the 918 is somewhat ‘over-designed.’ But maybe it is best to see it as a rolling laboratory, testing components that reflect the way motoring is heading, to an all-electric future.
Scale stats
Revell: Porsche 918 Spyder
Scale: 1:24
Parts: 129
Assembled length: 194 mm (7.75 in)
Manufacturer's ref: 05681, part of Revell Gift Set
Thanks to Revell for the review kit.
Parts layout (below) shows components moulded in silver, plus chrome and clear. Vinyl tyres are supplied in two sizes, for front and rear pairs. 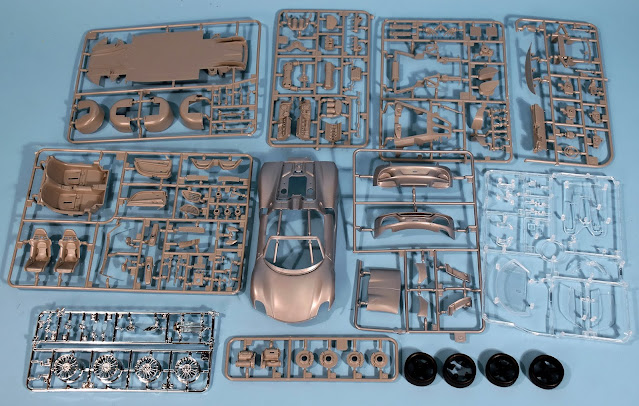 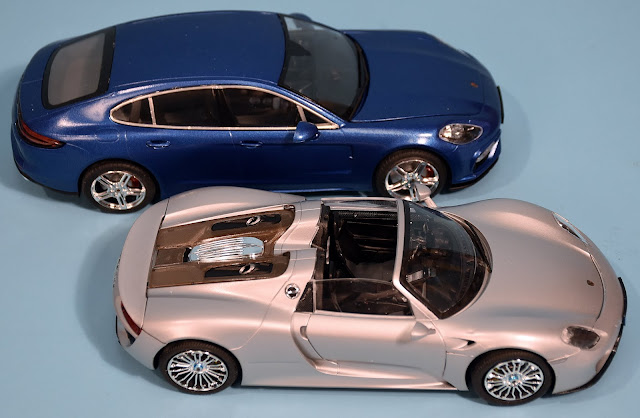 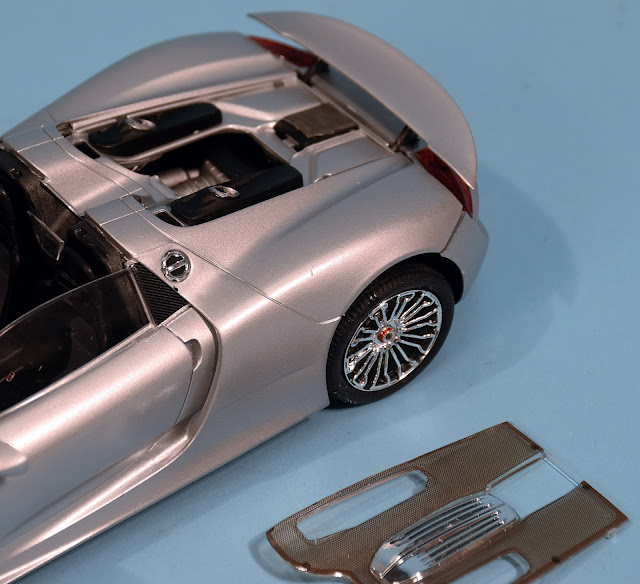 Note the engine hatch (below) is actually a grill. Decals depict its hexagon structure. Also note that the retracted spoiler. 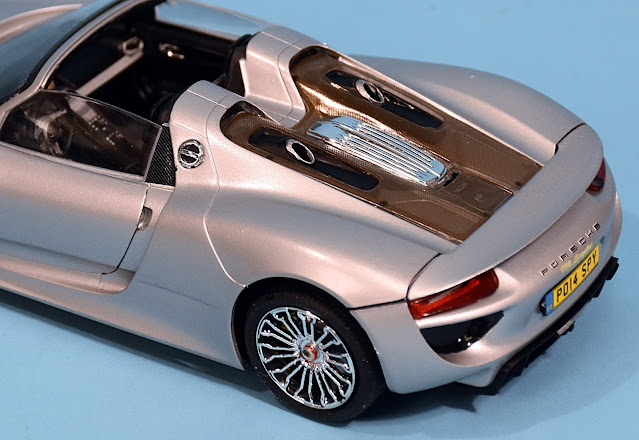 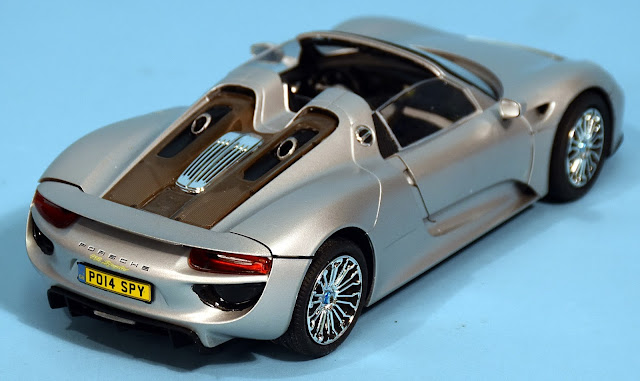 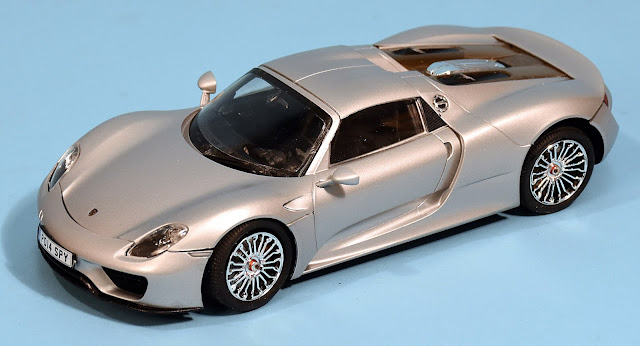 Assembly of the chassis pan (below) with the engines and suspension in position. The electric motor at the front is obvious, as is the V8 at the rear. The rear electric motor is somewhat hidden, but lurks behind the V8 block, in line with the wheels. The silver box in front of the V8 is the lithium-ion battery pack 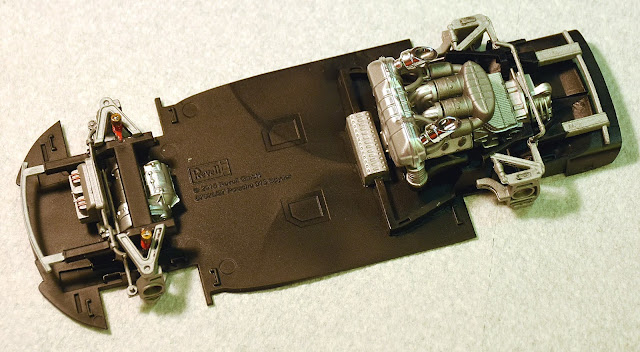