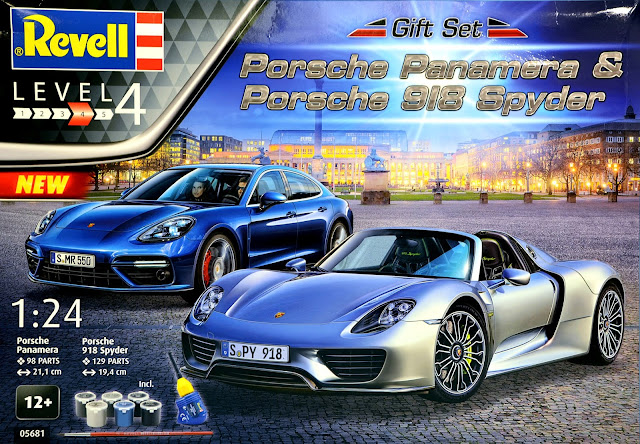 PORSCHE-LOVERS STAND BY to enjoy a duo of kits, packed in the same gift box. The Panamera and 918 Spyder are both to 1:24 scale. First we look at the Panamera.

Mat Irvine: The idea of a four-door, four-seater Porsche may be anathema to some, but the concept works well in the metal. This is the second-generation shape, and really does have visual elements of the classic 911 at the front and rear, especially with the taillight design.

The parts for the two cars are poly-bagged, but mixed up in the gift box, leaving you to sort out which components belong to each vehicle. The bodies are easy to distinguish, but you’ll probably have to check the lettering on the runners to be sure of the rest! Once that's done though, things get easier.

Like the recent Revell Land Rover kit, the Panamera has an extremely well detailed body and interior, combined with somewhat simplified running-gear components.

This is the Panamera Turbo version, so has a 4.8 litre engine with twin turbos. So you get the complete engine block, with (probably) a 7-speed automatic transmission, the cooling system and rear exhaust pipes. Howver, note that the vast majority of these components are hidden once the kit assembled. The only part that is visible, and only then if you remove the engine cover under the bonnet, is a glimpse of the engine block – well just the turbos. In reality, this is not really a fault of Revell, but is down to the vehicle’s design.

The interior is visible though, and here you have the option of building it left- or right-hand drive. Note thought that Revell supplies only UK licence plates, rather than other left=-hand drive countries, suchg as Ireland, Australia, New Zealand, South Africa, Japan and others.

There are decals for the main instruments and the centre consoles, and even the back seats appear to have enough controls to drive the car from the rear seats! There’s even a decal for the driver’s overhead console, though this is difficult to see once the kit is completed.

The fit of the parts is excellent, though you have to take care to fully fit the interior up into the body and the dash over the panel that juts out from the firewall. If you don’t get this snugly in place, the rear chassis pan doesn’t quite fit up into the body. A bit of careful juggling helps here.

There are a pair of exterior mirrors with separate chromed ‘glass’, and although invariably a weak point with many models, these do fit snugly and securely into the body, not always the case.

Other options, are round or square exhaust tips, and whether you fit the bonnet stays into place. There are two sets of parts for these – extended (bonnet up), or retracted (down), though you won’t see the latter. Some may choose to leave these and the bonnet hinges off, as it makes opening the bonnet to view the covers over the engine, a bit easier.

The side window surrounds should be finished in chrome, not the currently popular black, so this could be your chance to use Bare-Metal Foil, as I did.

Overall, I found the Revell Porsche Panamera a good build. Thanks to Revell-Germany for the review kit.

Part of a gift set with the Porsche 918 Spyder.

Parts for the Panamera (below). The body is moulded in blue, with light grey, silver, and transparent for the rest. 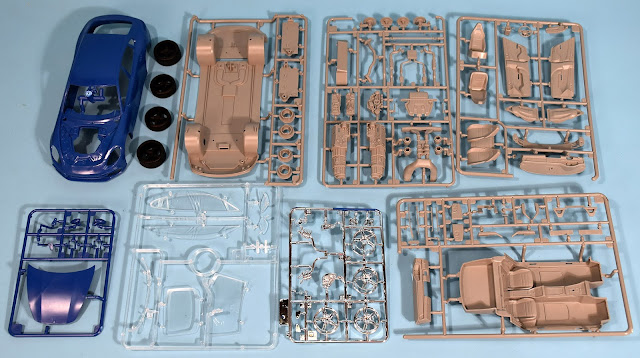 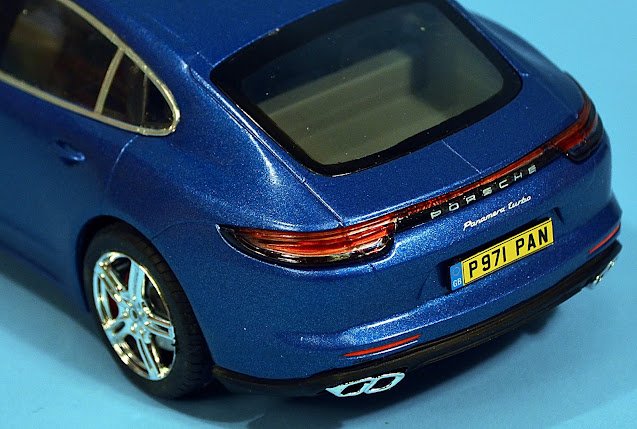 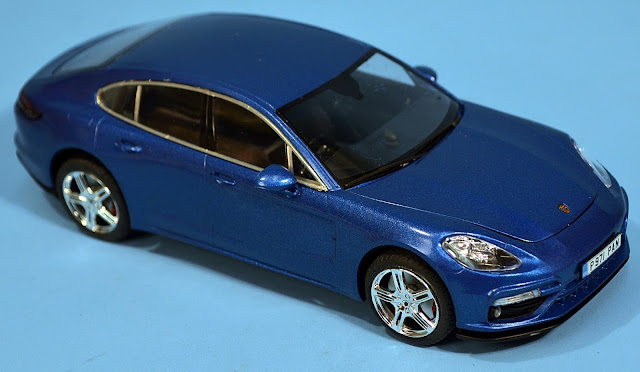 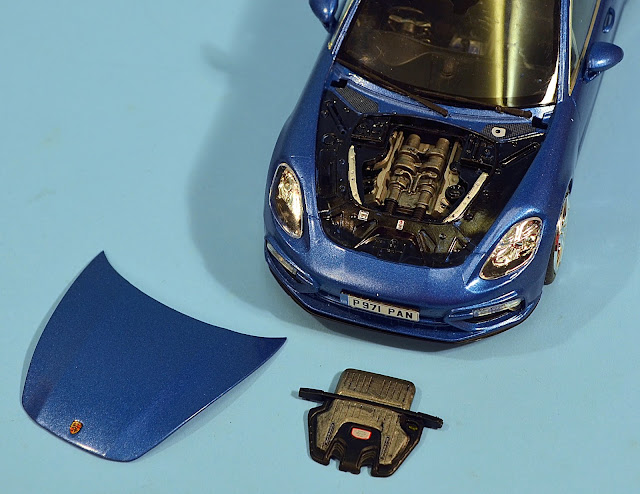 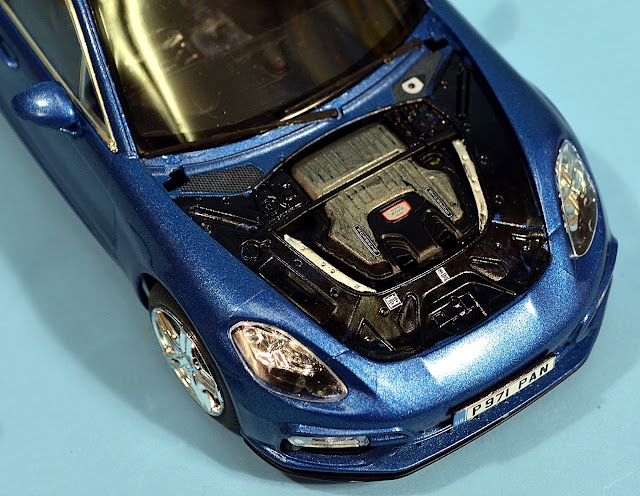 Main component modules (below) are the body, interior and chassis. Note there are two covers over the engine, the bonnet and the engine cover itself. This makes maintenance difficult for the owner, perhaps because Porsche doesn't really want you changing the plugs! 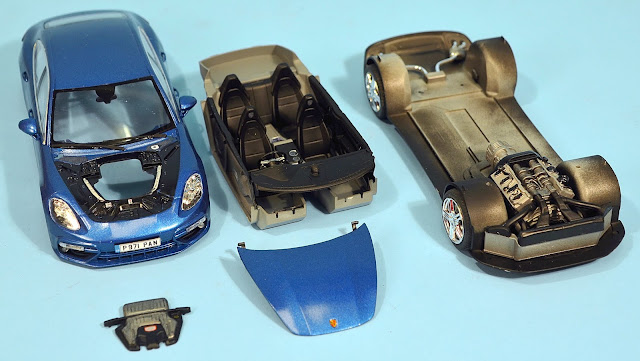 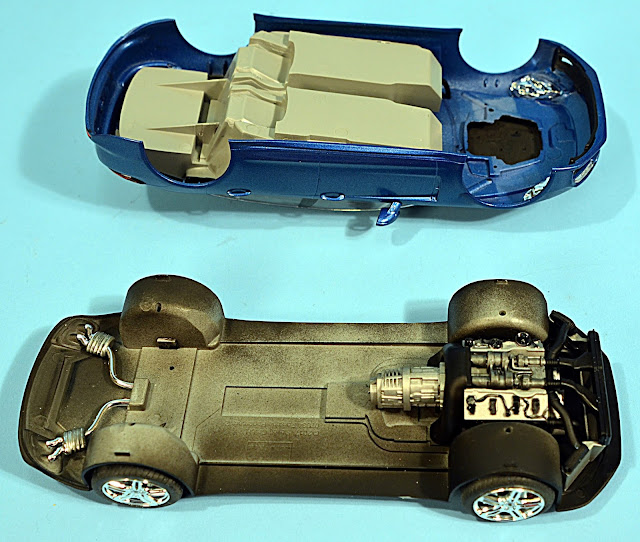 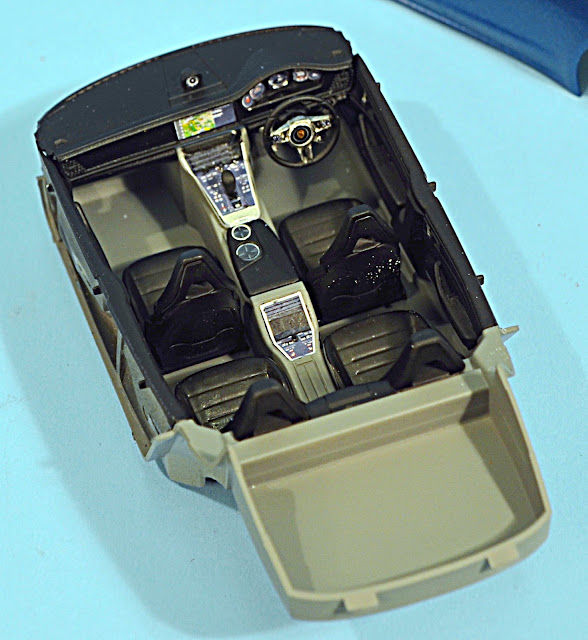