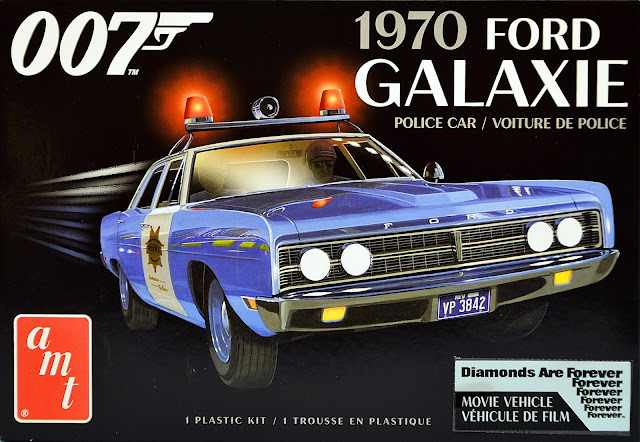 JAMES BOND is the movie industry’s longest running franchise, with the 25th movie due for release in 2021. And now Round-2 has a license to produce kits of Bond movie subjects, using the AMT brand.

The kit itself is a 1970 Ford Galaxie, but the movie cars were actually Ford Customs, the most basic model then in the Galaxie range. Consequently, some of the kit detailing needs to be removed. The instructions do give some tips ‘to create the movie car’ though there are other things that also need to be done. First is to remove the chrome strips down the sides, which is not a difficult task, best done with a sharp blade to scrape off the moulding. Don’t try and slice it off, as you’ll almost certainly dig into the bodywork. Then you can finish off the surface with a fine file, followed by and wet and dry glasspaper.

One point mentioned in the instructions is the rear bumper, the section between the tail lights not being chromed. In fact, it should be body colour, so either needs sanding smooth and painting, or removing, attaching the actual bodywork, and painting all as one. It's not mentioned, but the same also applies at the front, where FORD is moulded on front of the hood. Customs didn’t have the name there, and the section should again be body colour, not chrome.

When it comes to painting, the Diamonds police cars were blue and white, but unfortunately the whole kit is moulded in blue. This means you need to thorougly prime the white areas, otherwise the blue may bleed through. All of which could avoided if the kit was moulded in white! I found the best method was a primer coat, followed by matt white, then gloss white. After that, I masked the roof and front doors, and repainted them blue! I used Humbrol Matt White, with a Testors Bright White top coat. For the blue I used a Testors Intermediate Blue undercoat, finished off with Testors Bright Blue.

According to the instructions, the interior is black or metallic blue, but careful examination of the movie sequences – not easy as was all filmed high speed and at night – appears to be mid-brown or tan. So I used Testors Afrika Mustard over Humbrol Dark Brown.

The interior equipment is what was supplied with the original AMT Police Interceptor kit, with a selection of radios, microphones, speakers, a shotgun, hand-held lamp, and a fire extinguisher. None of this is apparent in the movie, so use what you fancy. The lightbar does match the movie version, though it uses only the centre siren and two outside red flashing beacons. Some cars, though not all, also have a short antenna fixed on the section in front of the trunk lid.

The decals supply two versions of the instrument panel, plus Las Vegas police badges and slogans for the doors, with a choice of four numbers for the roof – 2, 3, 8, and 9. Only the first and last appear clearly in the movie sequence, and given there were seven cars in all, I assume the others wore different numbers. There are also two sets of licence plates.

Overall, this is a good reuse of an existing kit in a new guise, and adds to the growing Bond Car Collection – but I do wish it had been moulded in white! However, you could get round this – find another Police Interceptor kit moulded in white. You can build that, and use this kit’s decals.

One side of the box (below) shows the decal sheet, and movie poster. The other side features closeup details, but note the engine block should really be in Ford blue. This is more Chevy red! 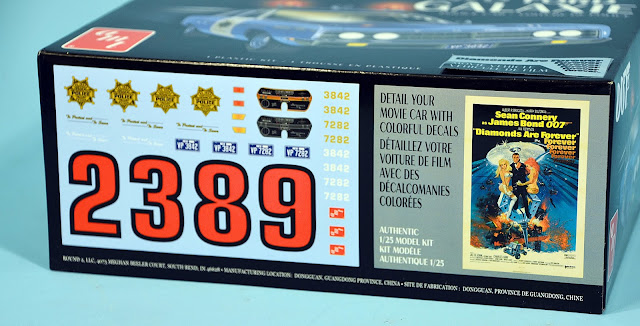 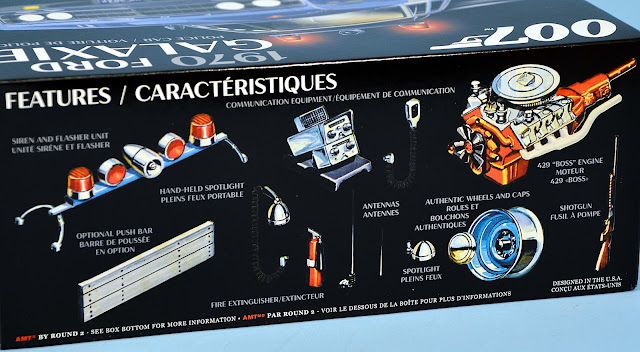 The basis of the kit (below) was initially a promotional model, hence there are metal axles, self-tapping screws, and an engine insert that would have replaced the engine block. If you have no intention of opening the hood and showing the engine, you could use this instead. 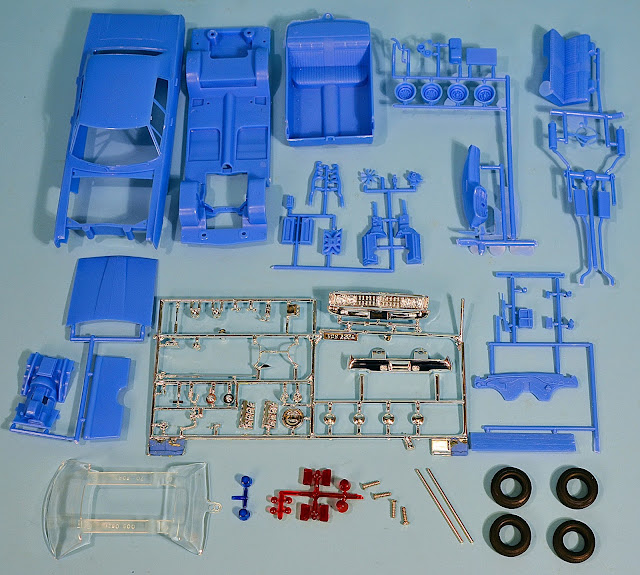 One of the chrome side-strips being removed (below). 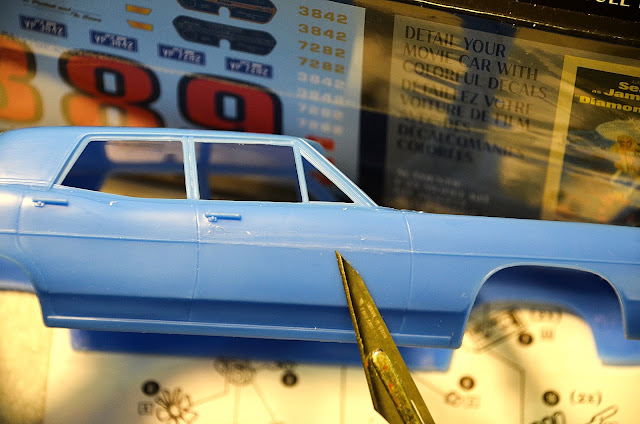 Rear panel (below) was finished correctly in blue, not chrome. 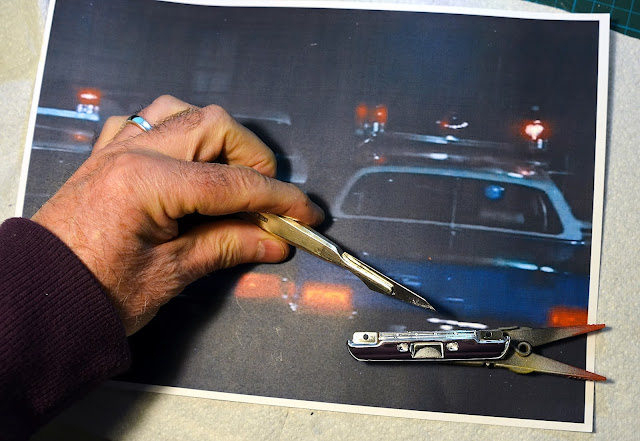 The bodywork (below) being primed and painted. 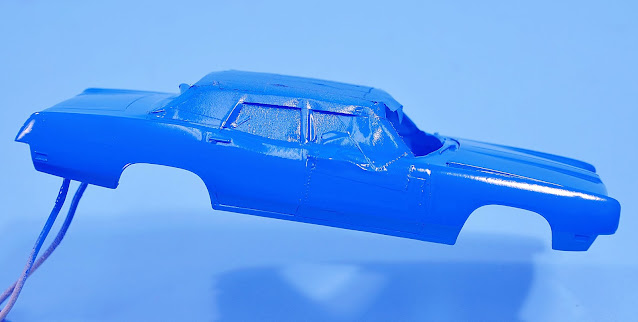 The interior (below) with police equipment installed. 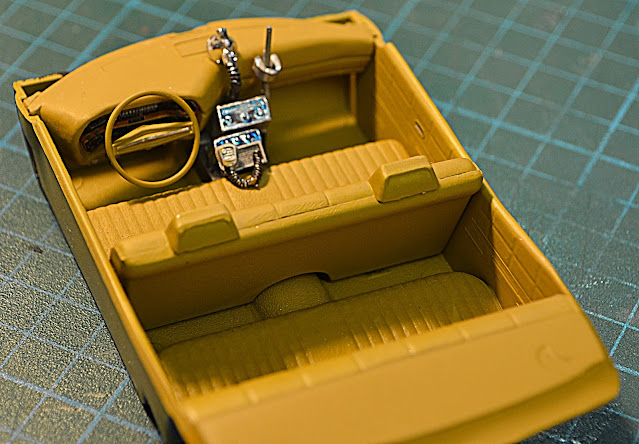 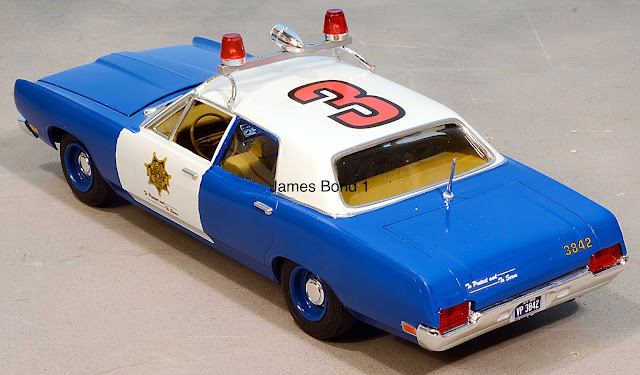 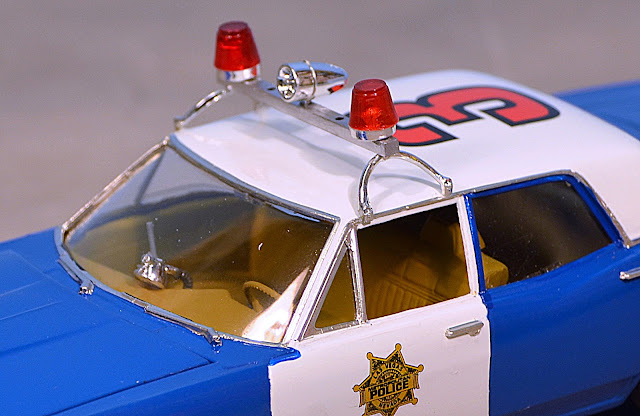 The motorcycle cop figure (below) isn’t in the kit. Instead, I added an old Motorbits Miniatures figure, though it's long out of production. 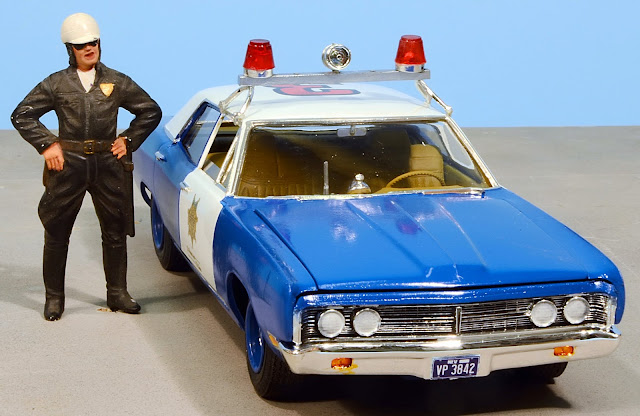 Two earlier releases of the same kit (below). Top is the original AMT issue, as a re-box for Stevens International. Bottom is a Hobby Heaven release of the same kit. 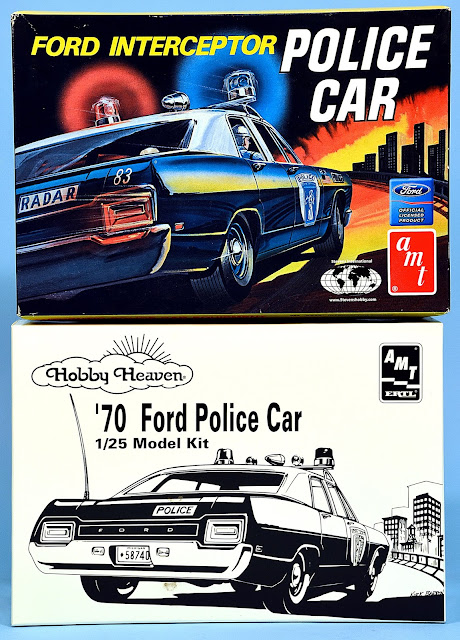