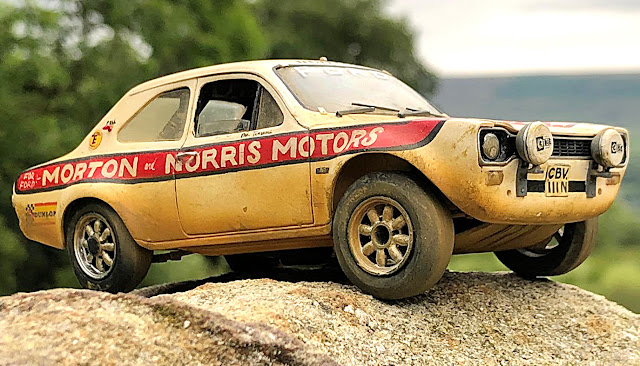 HOBBY BOUNTIES is run by Peter Chiang in Singapore, who ran another of his model competitions on 7 August 2021. Mat Irvine and Tony James of Timeless Hobbies (ex-Comet Miniatures) were asked to judge the entries.
Mat Irvine: The subjects concentrated on vehicles and figures; I dealt with the former, Tony the latter. However when we’d both done our initial judging, we each looked at all the entries, then swapped notes and found we’d come to exactly the same conclusions for both! (Tony reckoned it was about the first time we both agreed on anything!)
It was a small but eclectic selection of entries. Particularly notable was a rally version of the 1:32 scale Ford Escort by Paul Tattersall. Also two conversions using the ‘Quick Build’ VW T1 Bus by Razali Ahmed.
In the figures section we were both very impressed with Victor Wong’s ‘shadow boxes’ featuring Airfix’s 54mm figures. Both cleverly used existing paintings as the background, with figures added to make a 3D foreground – and it was very difficult to spot the join! 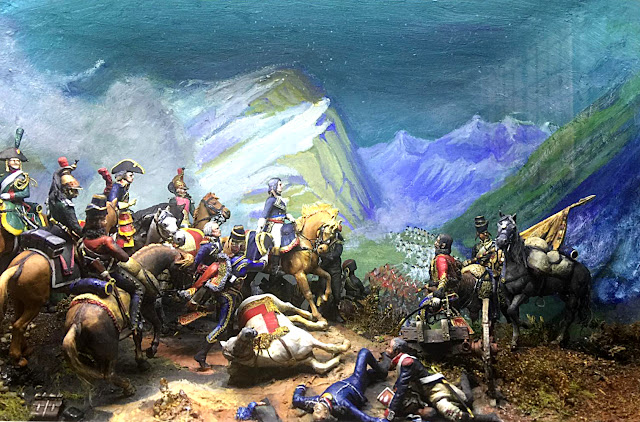 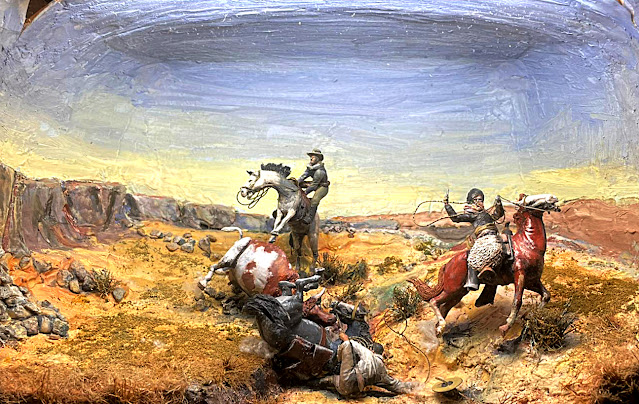 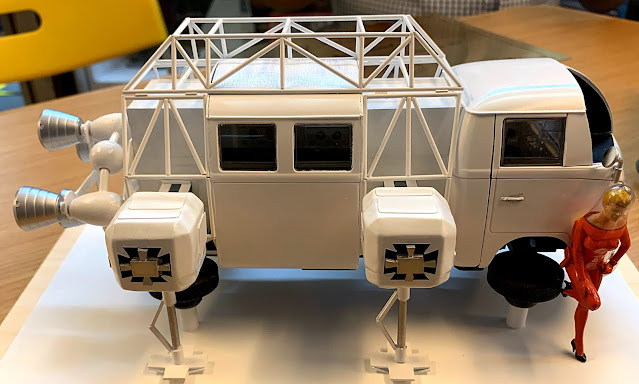 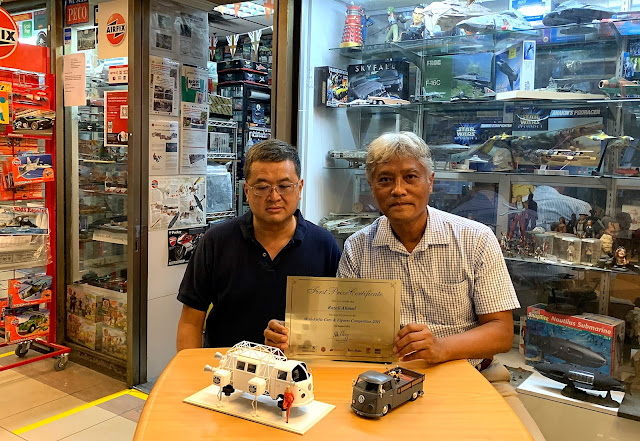 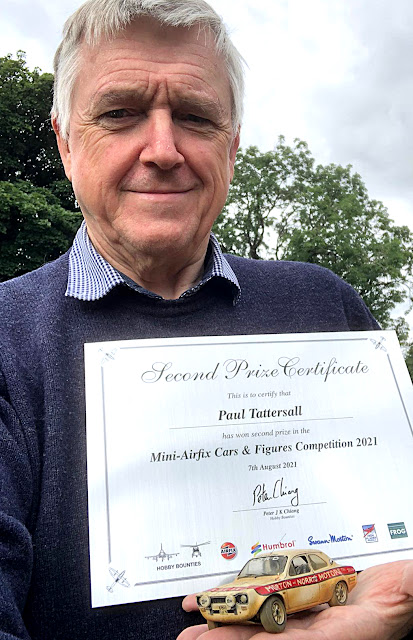 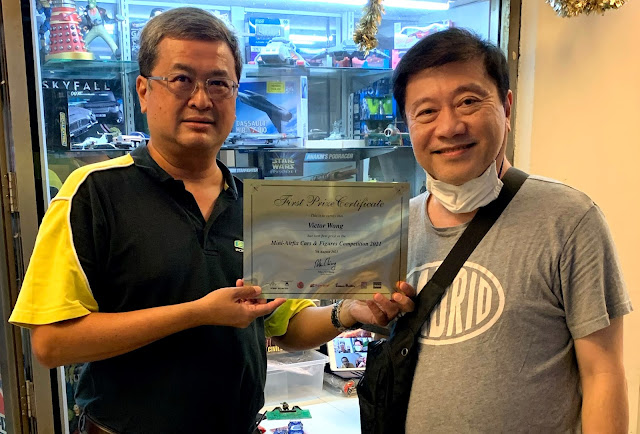 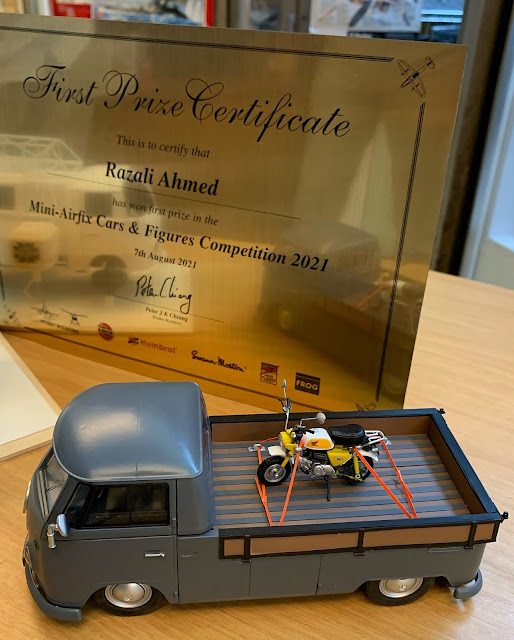 In the words of Peter Chiang: “This was one of our bi-monthly competitions. We accepted Airfix car and figure models not submitted in previous competitions. This competition was open to all, with submissions being sent through our Hobby Bounties Facebook page.

The event date was 7 August 2021 as it was the start of the long weekend commemorating Singapore’s National Day on 9 August 2021. I felt that more people were interested in cars, as cars are very expensive in Singapore, due to taxes and the Certificate of Entitlement. Figures are not as popular, as many people struggle with painting faces."

In the end, there were nine car entries and six figure entries.

The car entries came from as far as the UK (from Paul Tattersall with his Airfix Ford Escort) down to Australia (John Bartram with an Airfix 1:32 scale Bentley Blower). Of course, we always get the creative entries from Razali Ahmad, who modified two Airfix Quickbuild Camper Vans into a motorcycle pickup truck and a caricature ‘Space 1999’ Eagle Transporter.

For the figure entries, we had the classic Airfix 1:12 Black Prince, Ng Keng Leong’s 54mm ambush diorama, and some shadow box models from Victor Wong. These were based on real paintings, made into three-dimensional models.

In the end, we separated the cars and figures entries into two categories and awarded the prizes:

Cars 1st Prize Razali Ahmed: Volkswagen Campervan pickup. Razali’s entry is a converted 1:24 scale ‘VW Kombi truck with a Honda Monkey.’ He used the Airfix Quickbuild VW Camper Van. He cut the roof and joined with a ‘cut shorter back end’ to make a short cabin. The back he made into an open flat top with wooden-stripe pattern. He attached a strapped down Honda Monkey to finish up the cargo load. The flat top sides were scratch-built, so it looked like an openable metal-reinforced hinged wooden droppable sides.

2nd Prize Paul Tattersall: Airfix 1:32 Ford Escort. It was modified to be an RS 1600 rally car, with large wheel arches. The wheels came from an Airfix Cooper slot car. All other details are scratch-built and the markings were hand painted. The engine bay used parts from a Matchbox Surtees race car, and of course weathering was an important finishing element.

3rd Prize Razali Ahmed: Volkswagen Kombi Truck Space Van (Space 1999 Eagle Transporter).  Razali used the Airfix Quickbuild VW Camper Van as the base, starting with a nose cockpit that he made from a shortened cab Kombi Truck head.  He cut the windshield frame and made flat-slab cockpit windows. He lengthened the fuselage and added the Kombi leftover body to make the main space cabin in the middle. He added a warren-girder style ‘W’ design from Evergreen 1/16 inch rods, and much more besides. The female astronaut was modified from a 1:24 series MasterBox figure, with an added vacform transparent helmet.

Figures 1st prize Victor Wong: The Broken Rope based on a painting by Charles Russell.  Sculpted and converted from various parts, with horses and figures using Airfix multipose parts as armatures. The pistol was from the 8th Army set.

2nd prize Victor Wong: Battle of Rivoli 1797 based on a painting by Henri Phillpoteaux.  Sculpted and converted with Airfix parts as armatures.

Congratulations to everyone who entered the competition, and thanks to Mat Irvine and Tony James for judging.