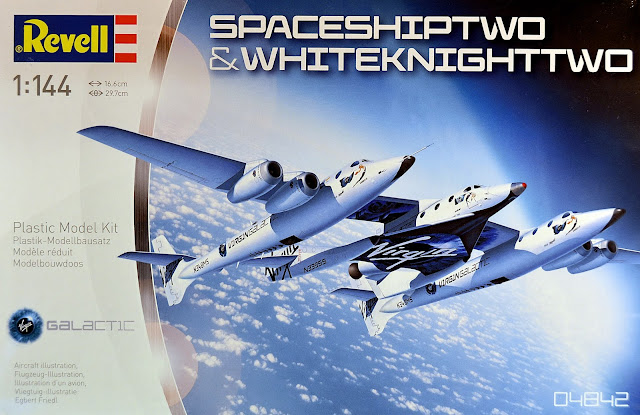 WITH SIR RICHARD BRANSON beating his space entrepreneur rival, Jeff Bezos, into space by a week or so on July 11, 2021, it's time to take a detailed look at Revell’s 1:144 scale kit of the Virgin Galactic craft.

Mat Irvine: This kit actually dates from 2013 and there was a brief look at Revell test-shots in December of that year. The test shot was moulded in grey, but this production kit is in white, with three main runners, two of which are identical. Two identical clear runners are provided for the windows.

The duplication is because the layout for WhiteKnightTwo differs from the first generation. Now there are two identical fuselages with cabins for WK2. There are four Pratt and Whitney turbofan engines, two each side.

The windows are also duplicated, as all cabins share a virtually identical window layout. And SS2 is much larger than SS1, so much so that it in 1:144 scale it is about the same size as the SS1 in 1:72.

Because the WK2 fuselages are identical, a few holes have to be opened up. Revell uses ‘left’ and ‘right’ (though says ‘port’ and ‘starboard’ in the first drawings), One of these parts is mentioned, A57, that fits in a hole behind the wing in the right-hand fuselage. However there is also part A64 which probably fits in a hole on the other side and though there is a hole in the moulding waiting to be opened, the instructions omit this part completely. So is it for port or starboard? Frankly, I wouldn’t notice if it’s there or not!

You also how to decide how to deal with the multitude of windows, whether to paint the parts first, then fit windows and join fuselage halves or – a neater solution – fit windows, join halves, sand joins, and only then paint. But of course you then need to mask the windows. The easiest way to do this is to use a masking liquid. Apply it, leave to dry, paint the craft  and once that is dry, carefully peel off the mask. A small scalpel blade is best for this. Although it’s a bit fiddly, this approach works very well and leaves a clear line around each window and frame.

The instructions also indicate that if you want the craft to sit on the ground, weight will be needed in the forward fuselages before the halves are joined. But if you only intent to display on the stand, these could be omitted.

There are several display options. The two craft can both be built with with landing gear lowered, or retracted. They can also be built to display separately. WK2 can also be built without the cradle for SS2 to be attached, as the aircraft is designed for other purposes than being mothership for SS2. However there is only one stand, so you have to choose which can use that.

A typical set-up however would be for SS 2 to be attached under the centre wing of WK2, so SS2 landing gear can be raised, the WK2 gear lowered.

One of the main features for this kit of course is the highly distinctive Virgin Galactic decals that adorn not only the underside of SS2 – named Unity, and WK2, named Eve. The markings provide in the kit don’t precisely match the July flight, but are generally correct. However, you need some decal softener to allow them to seat around the intricate mouldings.

It will be interesting to see if Revell updates the kit with new markings.

Thanks to Revell-Germany for the sample kit.

The box base (below) includes various details. 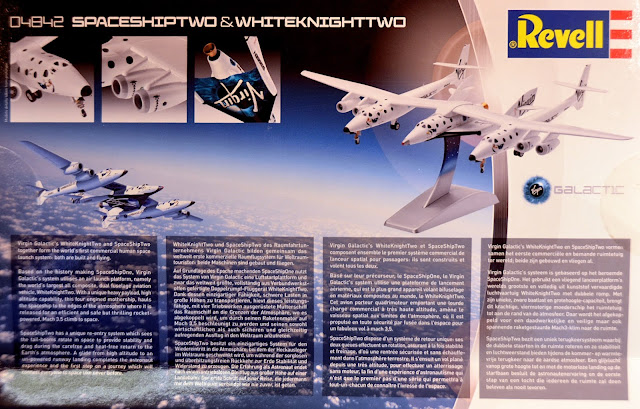 Closeup of the neatly printed decal sheet (below), with distinctive Virgin Galactic markings. 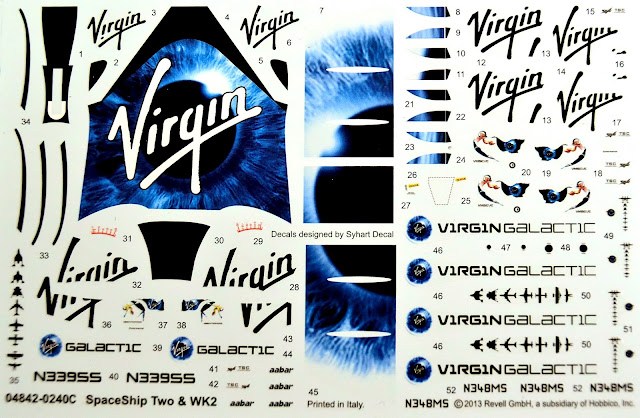 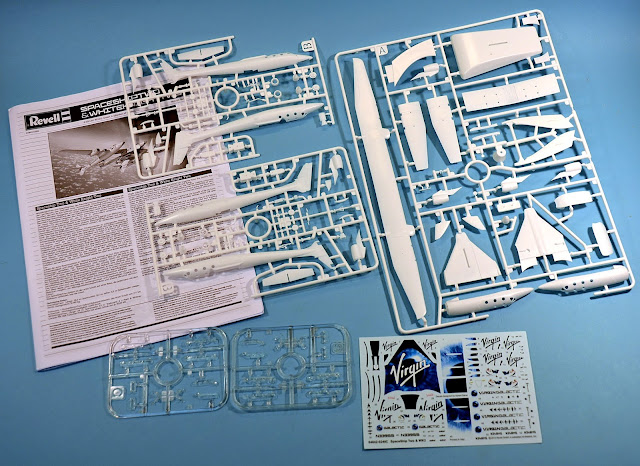 Buildup of WK2 and SS2 (below) shows the WK2 windows with masking fluid applied (bottom) and removed (middle). 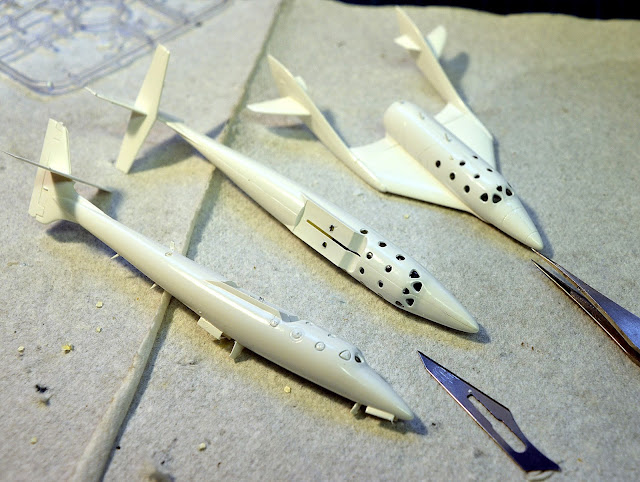 SS2 on the supplied stand (below right) and WK2 on its landing gear. 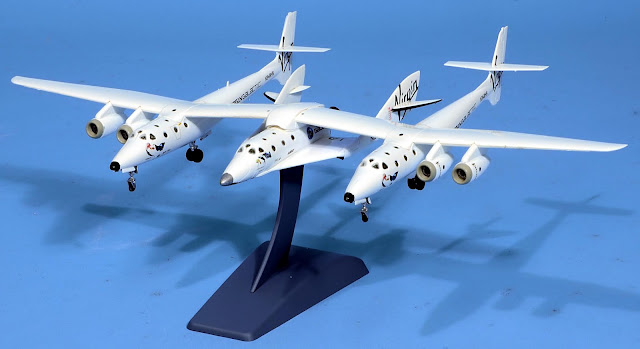 Comparison (below) of the limited availability Tokiwa WK1 and SS1 (left), and Revell WK2 and SS2, both models to 1:144 scale.