IT’S STAR TREK DAY TODAY, SO TRY THIS 1:32 SCALE ROUND 2 KIT OF THE SHUTTLECRAFT ‘GALILEO’ 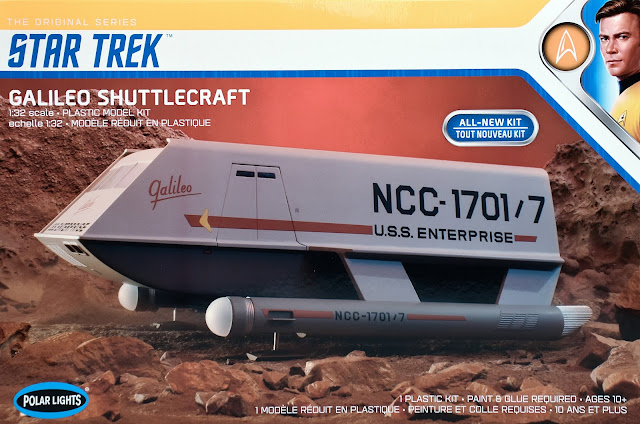 AS AN ALTERNATIVE TO using the matter transporter on Federation Starships, there were the box-like shuttlecraft.

Mat Irvine: And AMT, the originator of Star Trek kits, and for many years the only company associated with the world’s most well known science fiction series, made the one featured in the Star Trek episode The Galileo Seven, which first aired in 1967. It was a small kit, but did come with an interior. And for many years, it was the only model kit of the Galileo shuttlecraft

Then Round-2, by now owner of the AMT name, polled modellers and found that a new Galileo kit would be appreciated. So the design and manufacture was begun, though several things would change. Firstly, it would be a much larger kit; secondly, it would be released under the Polar Lights name; and thirdly, there would not be an interior. The new Round 2 kit is quoted as being to 1:32 scale, and is larger than the old AMT model. An interior was initially considered, but abandoned because it could double the kit’s cost.

About the kit: The Galileo has a simple shape, so the kit’s main bodywork is mainly several large pieces of injection-moulded styrene. The upper section is built from five parts: two sides, the roof, front panel and impulse engine assemblies at the rear. The lower hull is mainly a single part. This helps with painting, as the Galileo has a white lower section, with warp drives finished in mid-grey. The instructions don’t really allow for this, but you can modify the assembly order, and build the upper structure in one piece, the same for the lower.

The hatch on the port side comes in two parts. The lower section can be made to hinge downwards, and the upper section, although moulded in one piece, can be easily split into two and cemented inside the opening. But of course at this stage you are left with an empty interior. The windshield is supplied in clear, though in the show it is usually seen with ‘shields up’, so it’s best to either paint the inner surface black, dark grey, or blue. But if you think you might fit an interior, then just leave it, but backed up with a suitable sheet of dark plastic. The interior itself, assuming you want to see some of it, is a matt duck-egg blue.

The only other detail seen in The Galileo Seven is at the rear, where the impulse engines are situated. The kit includes a panel that drops down to reveal an interior filled with classic science-fiction ‘wires and gizmos.’ These are examined in the episode by Spock, McCoy and Scotty. In the kit, the inspection panel can be completed in open or closed position.

The warp drive nacelles are two tubes with classic Enterprise details fore and aft. The front hemispheres are moulded in clear plastic, and need spraying with a mist coat of white from the inside, just enough to make them opaque. The rear has spherical interior detail.

The landing gear has three rectangular pads, two at the front, one at the rear. The forward pair can be assembled retracted or lowered. The single rear pad has a more complex two-axis hinged arrangement, its design much like an aircraft undercarriage structure.

Frankly, the overall completed look is extremely bland, just being an expanse of white and grey. But the whole lot is brought together by the colourful decals, and Round-2 has supplied a large sheet, with markings for three shuttlecraft, Galileo, Einstein, and Columbus. There is actually a fourth option, as the kit can also be built as the Galileo II. There are tiny decals for the inspection panel.

The original Galileo, built for studio work: The Galileo was built by Gene Winfield, a car designer and customizer, and at the time running the AMT Speed and Custom division. AMT is unique as far as model companies are concerned, as it is the only one to ever have built both model car kits and full-size cars. For the latter it had a Speed and Custom Division in Phoenix, Arizona. This was responsible for such vehicles as ‘The Man from UNCLE’ car, the van from ‘Ironside’ and the Chrysler Imperial for ‘The Hero’ – and of course, the Galileo spacecraft.

Winfield’s original prop was restored some years ago, having gone through several ownerships since the original Star Trek series finished. First it was donated to a school for the blind, then it went through several other owners, until being stored in Ohio for 20 years. It was auctioned in 2012, selling for over $70,000 to top bidder, Adam Schneider. Considering the original cost of $24,000 (admittedly, this was in 1965) this was quite an increase, as Schneider was buying what was basically little more than a decaying wreck. The Galileo was mainly built from wood, so a ship builder was used for the restoration, this being Master Shipwrights in New Jersey. When completed in 2013, the Galileo was donated to the Johnson Space Center, Houston.

And now to a matter of scale: The Polar Lights Galileo kit is listed at 1:32 scale, which sounds fine, except that the Winfield prop was 22 feet long. But the kit measures 11 inches long, which works out to 1:24 scale. So what went wrong? Nothing really, as that ‘full-size’ Galileo prop was actually built to be one-third smaller than it should have been. This was fine when the Galileo was seen in the distance, but not so good when cast members were close to the craft, perhaps entering the main hatch, or looking at the rear inspection panel!

The kit box (below) has plenty of useful information. 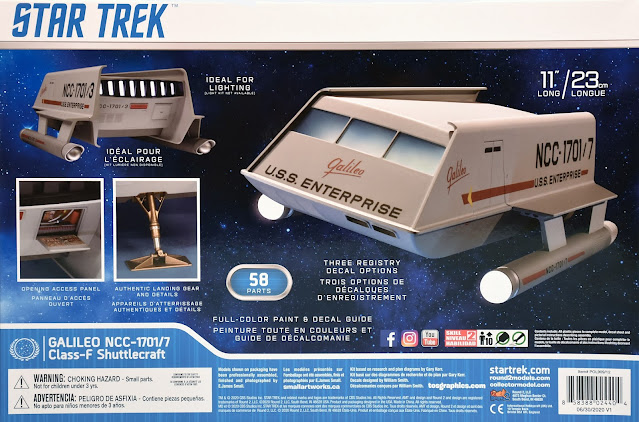 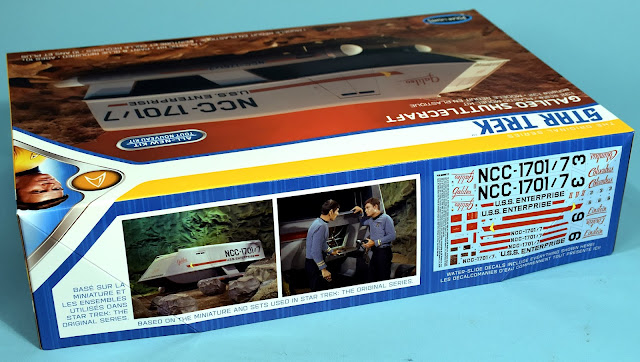 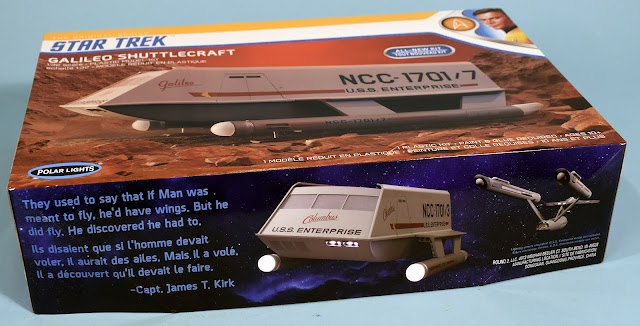 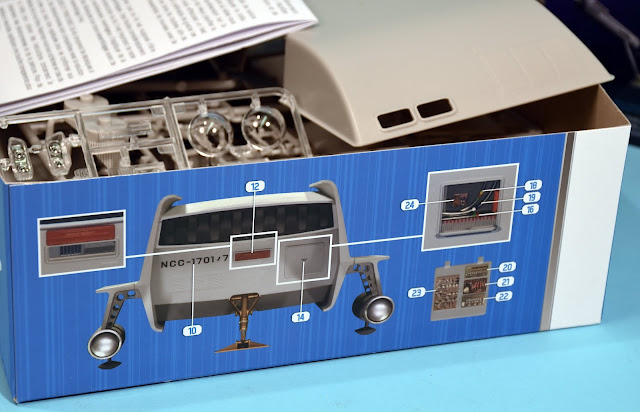 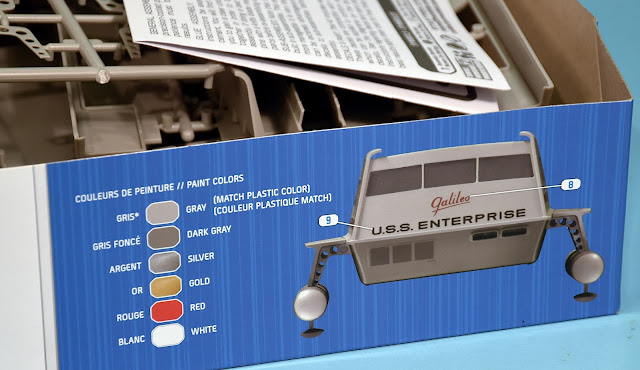 Components (below) are finished in grey and transparent plastic, 58 parts in all. 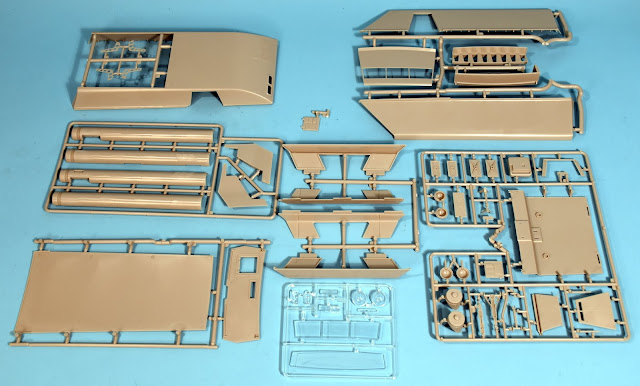 Decal sheet (below) is nicely finished, with markings provided for three shuttles. 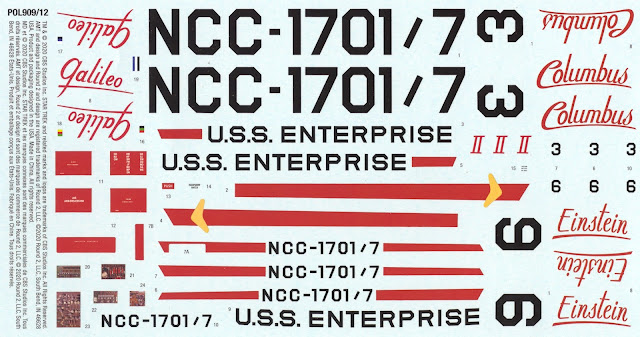 Rear of the Galileo (below) has impulse engine detail. 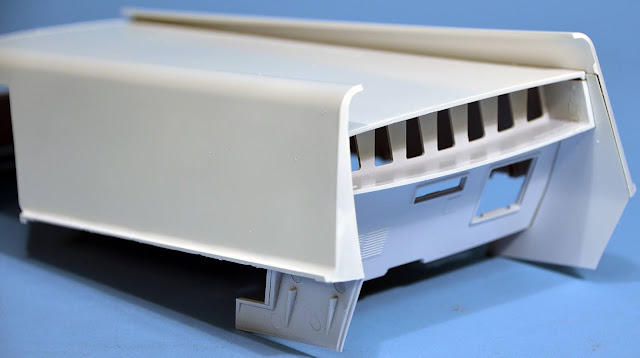 Rear inspection panel (below) has detail which careful painting will reveal.

Warp nacelles (below) during construction. 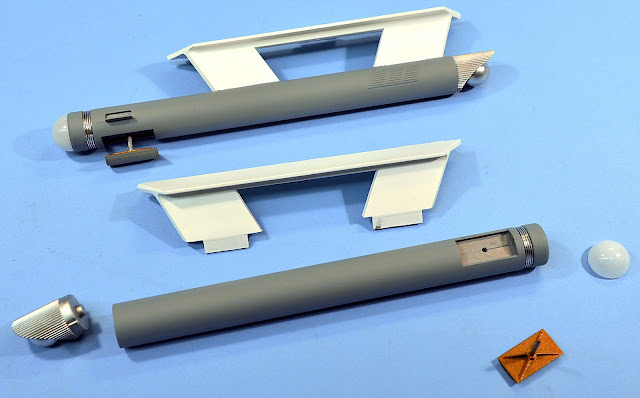 If you want to retain a clear windshield, you will need a same-size backing sheet (below) cut from scrap plastic, then painted black or dark blue. This can be fitted behind the glass, either permanently or left loose if you should later decide to fit an interior. 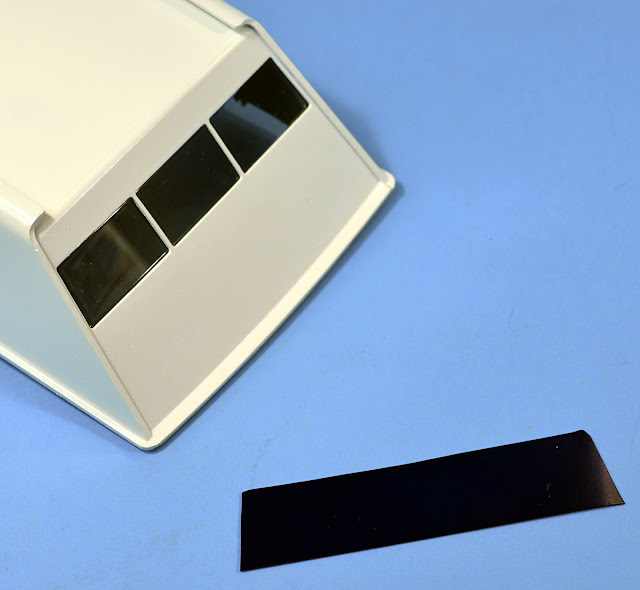 Upper half (below) complete.

I made the scene (below) to match the terrain created for The Galileo Seven.

The 1:32 scale figures (below) represent Sulu and Spock from the AMT Enterprise Bridge kit. And yes, I know Sulu wasn’t one of the ‘Seven’! 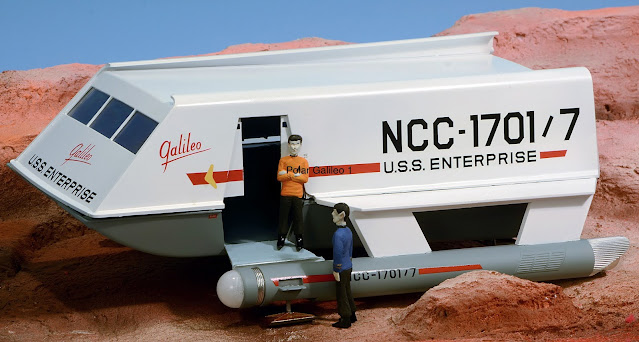 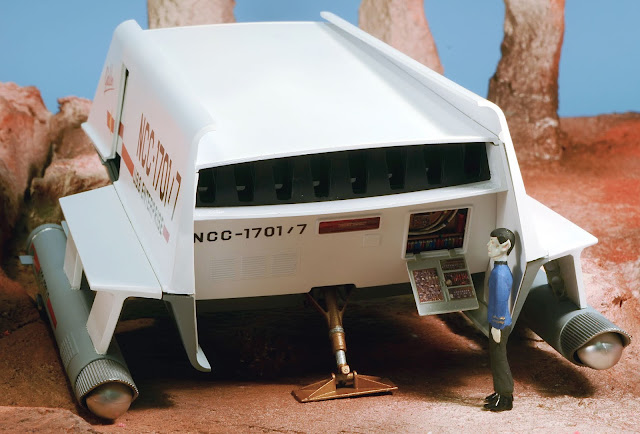 Polar Lights model (below left) and the AMT version.

Two scenes (below) from the original Star Trek episode. 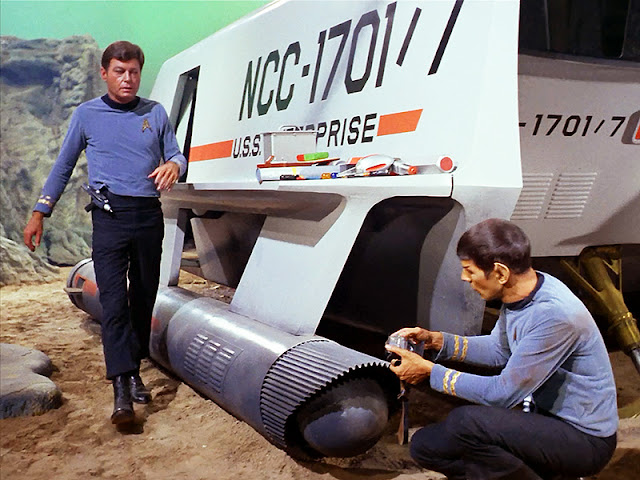 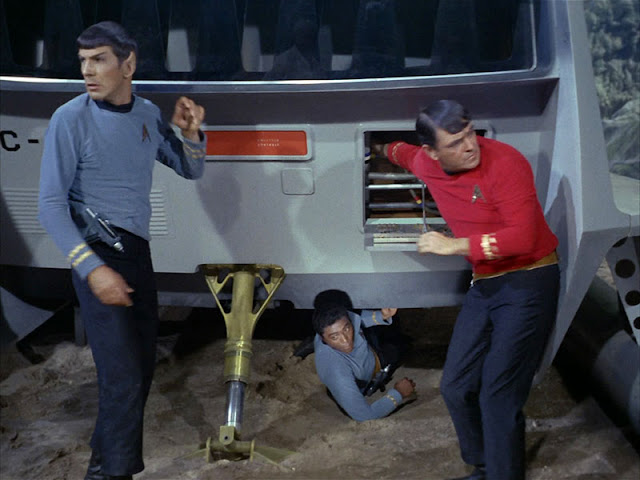