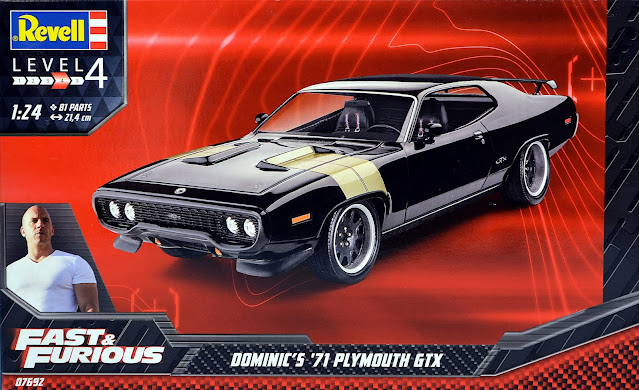 WE ARE NOW AT NUMBER NINE in the Fast & Furious movie franchise, with at least one more in the works. The films have featured a very large number of cars, consequently it is slightly surprising that there haven’t been many kits of them.

Mat Irvine: The movie-model link started well enough, with AMT acquiring the license in the early 2000s for Fast & Furious, followed by 2Fast2Furious, and Tokyo Drift.

By the next decade Revell had taken over the license, though frankly only redid what AMT had already done with the first two movies, which doesn’t quite help the modeller. However, the Revell Dodge Charger, which in reality was a hotch-potch of years, was better than the original MPC kit, issued as an AMT. 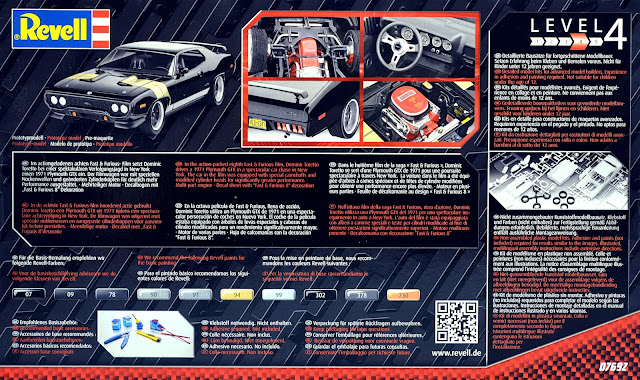 But now we have one of the cars from Fast & Furious 8, also known as Fate of the Furious. The vehicle is a 1971 Plymouth GTX, as driven by Dominic Toretto, played by epic cinema tough guy, Vin Diesel.

The kit not brand new, being based on a Monogram kit of the 1971 Plymouth Satellite. This is also the reason the kit is 1:24 scale, not 1:25. The model has been issued previously several times under both the Monogram and Revell labels. This time, although the basis of the kit remains the same, extra runners are supplied to make a more accurate movie model. Parts now include the special low-rider wheels, low-profile tyres, and lowered front suspension. There are four new disc brakes and wheel backing plates, as the stock vehicle dates from an era when front discs on American cars were still something of a novelty, the rears certainly having been drums. Most of the rest of the detail is down to paint and decals, which come on a very large and detailed sheet, with many labels that would have been omitted in earlier kits.

The kit can be built in one of two GTX options, the instructions differentiating between Version A (Stock) and Version B (Fast & Furious). Assuming that most modellers buying this kit will be for the latter version, the exterior bodywork is all gloss black, and that includes the grille and bumpers that would otherwise be chromed. The grille is actually satin-black, which can be either hand-painted over the sprayed gloss black, or you can paint the whole grille satin-black, mask, then spray the gloss.

The headlamps benefit from masking the existing chrome indentations, otherwise you’ll have to repaint in silver, before fitting the clear headlamps. The rear bumper/light surround has four lenses each side, these being on the decal sheet (though they could be painted). It’s actually easiest to paint the whole section gloss black, then pick out the individual lenses with silver paint or a Molotow chrome-ink pen. This will make the tail-lamp decals, especially the reversing lights, stand out nicely.

As with most cars there are external rear-view mirrors on each door, though these tend to be a bane for car modellers, as they are forever being damaged or knocked off. However, you could improve the security of these by drilling a very small hole in the mirror support, one in the door, then attaching one to the other with very thin metal rod, superglued in place. Door mirrors have the same notoriety for car modellers as propeller blades for aircraft modellers, antennas and machine guns for tank modellers, and virtually anything on a model ship.

The interior of the GTX looks black, but is actually a very dark grey. Decals are provided for wood-grain inserts, but these are only for a stock GTX. The Fast & Furious version has distinctive gold decals over the hood, leading to the air intakes. The hood-pins are also decals, which is a nice touch, though an after-market set of photo-etch items would be even more authentic. There are even decals for the three door/trunk locks, which are usually difficult to paint as they have to be absolutely circular! The correct New York plate KLO 6341 is also supplied.

Several movie GTX stunt cars were made, built by the Fast & Furious main car wrangler, Dennis McCarthy. Top speed was supposed to be 269mph, even faster than a Bugatti Veyron, at 258mph. Wrecking was of course part of the movie action, though I think we can safely say there were specially-constructed stunt junkers, built specifically for the task!

It appears the Fast & Furious model car franchise will continue, Revell having just announced that it is making Brian O’Conner’s (the late Paul Walker) Ford F-150 Lightning SVT pickup from the first movie. As with the GTX, the basic kit already exists in the Revell catalogue, so it only needs a set of movie-specific decals. I actually proposed the idea to Revell in 2017, so it would be nice to think this (maybe) prompted this new kit, though I suspect others may have had the same idea.

Thanks to Revell-Germany for the review kit. The US and European kits are identical, but are packed in different-shaped boxes.

Parts layout (below). The new runner for this version is centre, with wheels, suspension and discs. At lower right are the new tyres. 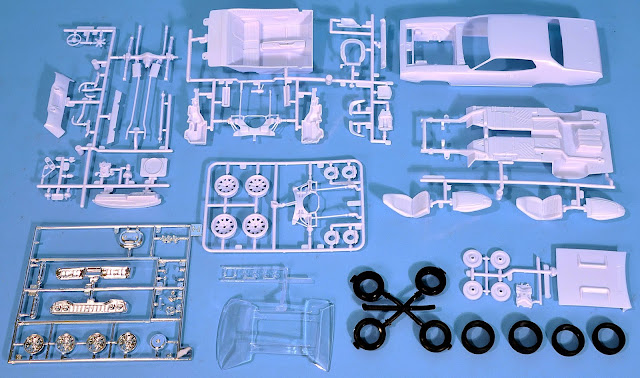 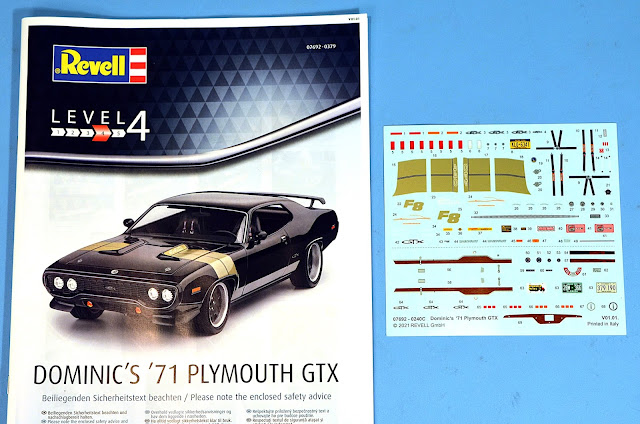 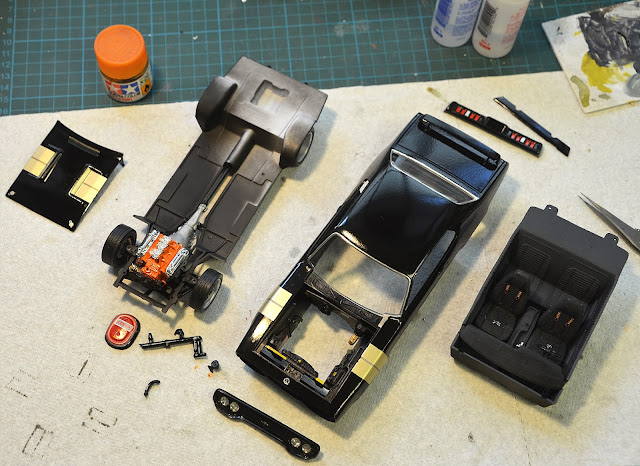 The hood pins (below) are only decals, but look highly effective. 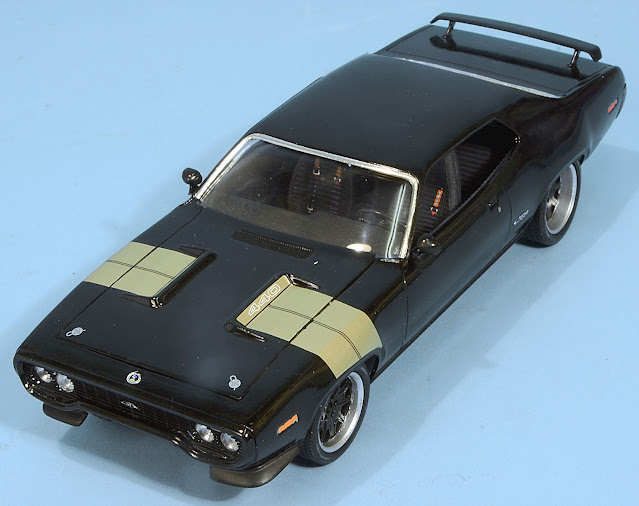 Underside (below) reveals the front engine/rear drive setup of this 1970s-era American car.

The finished car (below) with a 1:24 Dominic Torreto resin figure from Hobby Design. 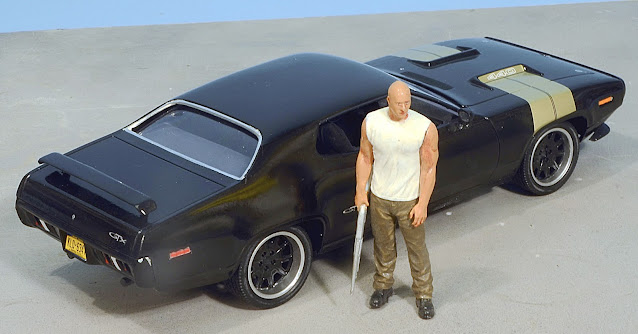 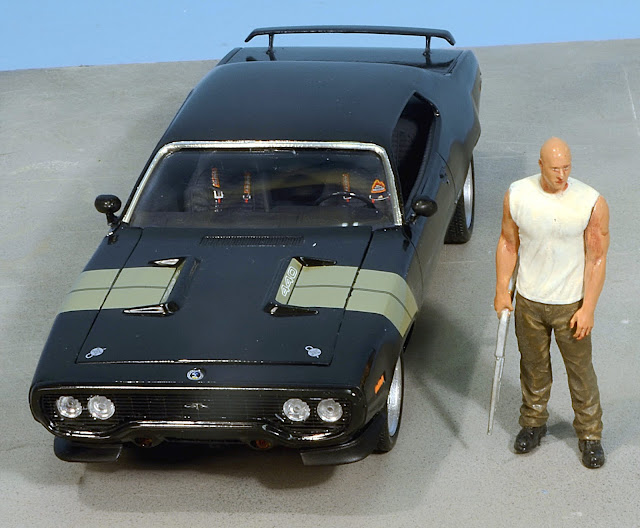 Boxes for two previous issues. The Monogram (upper, below) dates from 1984, the Revell from 1995 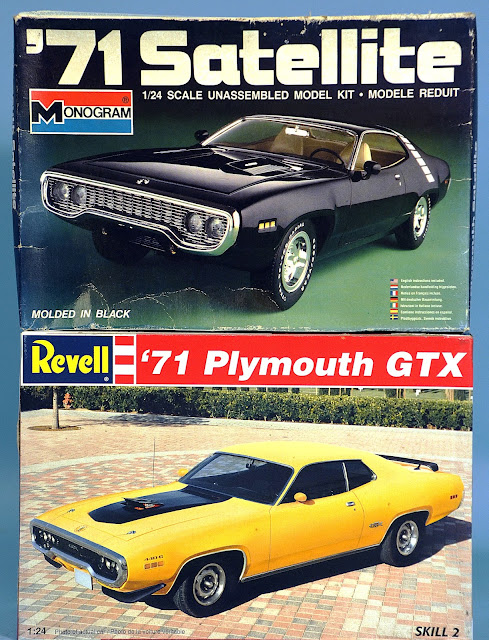 Box for the US issue of the kit (below). 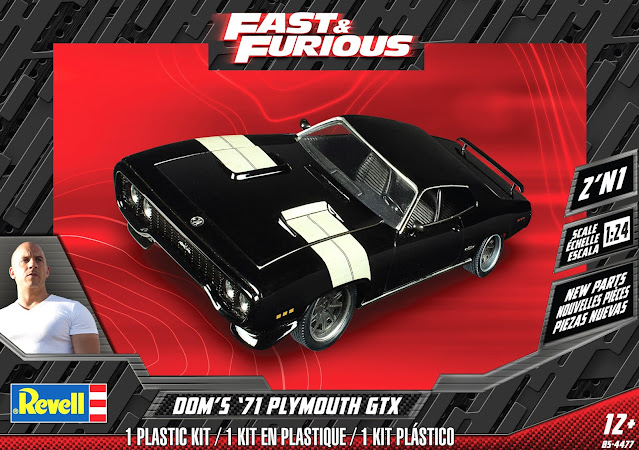