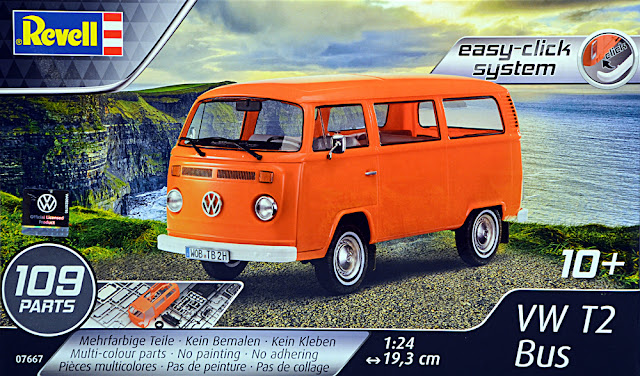 IT'S BEEN A LONG TIME COMING but finally the gap has been filled between the first Volkswagen MicroBus T1 and the third, T3 version. But now we can give an overdue welcome to this 1:24 scale Revell kit of the model in the middle, the VW T2.

Mat Irvine reports: Revell has decided to issue this kit as an ‘easy-click’ system model. This means it does not have to be glued together (though you can if you want) as all parts ‘click’ into place. Revell also supplies, as with other easy-click kits, two sets of decals, conventional water-slide and peel off/stick on types, so making the kit suitable for both new and experienced modellers. 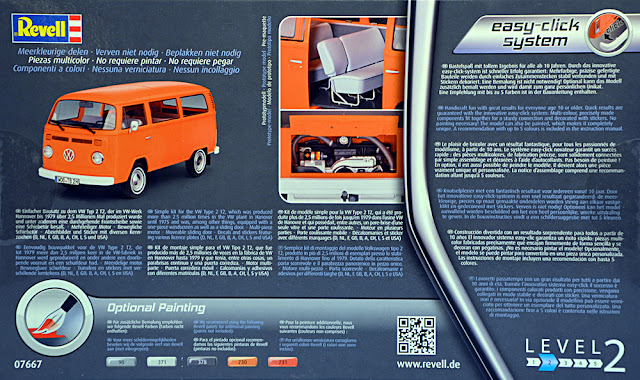 The instruction leaflet (below) is printed in full colour, and the two sets of decals are conventional water-slide (top right), and peel-off type (bottom right). 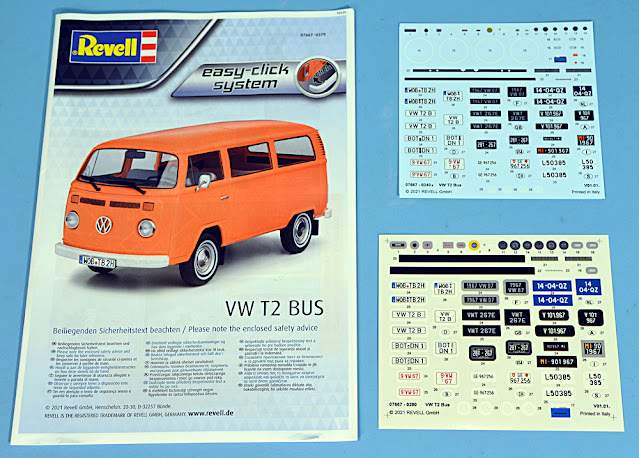 Parts layout (below) shows the various colours, plus chrome, transparent, and tyres. 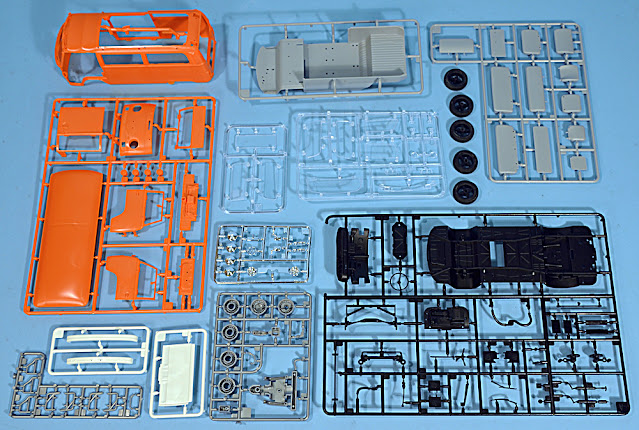 One possible downside is that this T2 is moulded in colour. This is so a new modeller does not have to paint it. But for experienced kit-builders, the model has a potential problem, as its body is moulded in orange, which can be difficult to overpaint because the dyes in the styrene are the most prone to bleed through a top coat.

The orange plastic is great if you are painting and sticking to orange or red or some dark shade, but if you wish to go lighter (especially white) as it can easily turn a pinkish shade. This was true in my case, as I opted to make the model as the star of the 2006 comedy movie Little Miss Sunshine, in which a T2 Bus is used as the screen family’s transport. In fact, it has greater screentime than any James Bond or Fast and Furious car! But the Sunshine T2 bus was finished in white and yellow, so my first task was to cover the kit’s orange bodywork in matt black. I then primed it in matt white, and finally in gloss white for the upper surfaces. Once dry, I masked the white, and painted the lower body panels in yellow. It was a lengthy process, but the only way to keep those pesky orange dyes at bay.

Other than that, the kit was built out-of-the-box with minimal alterations. However, one change was to remove the divider behind the front seats, which was not fitted to the movie version. Also, the passenger seat in the movie was a single, not the double as supplied by Revell. So a section was cut out of the centre of this seat and the two sides cemented together. The movie T2 also had both front seats covered in white cloth, which I duplicated by using small pieces of polishing cloth. Other than that, the only other modifications were to add an external fuel cap, as the kit has one hidden behind a flap. Side indicators (amber in front, red at the rear) are fitted, and these are supplied in the kit, but not listed in the instruction sheet. There is also a radio antenna fitted to the passenger-side front, but you will need to source that from your spares box.

First I sprayed the body in black (below) then followed up with white. 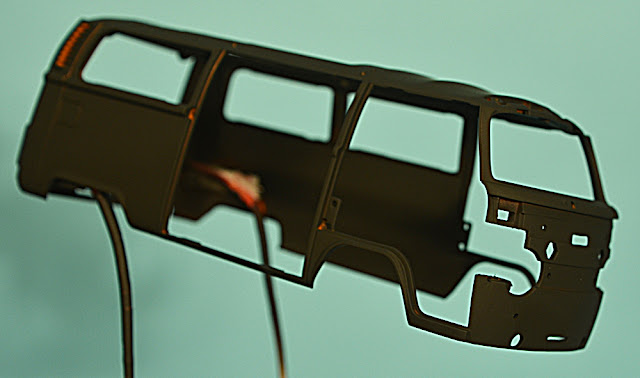 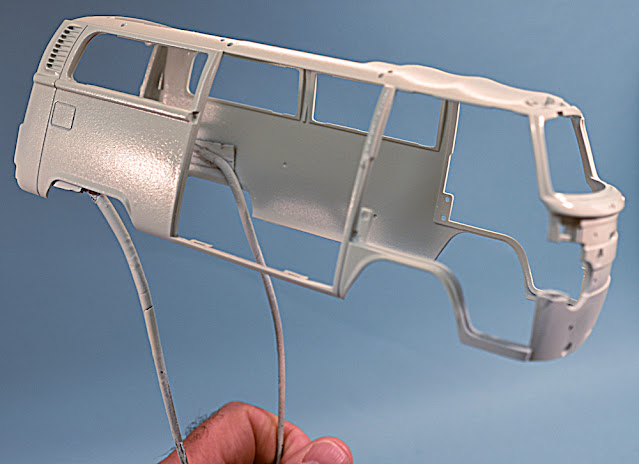 Seating components (below) needed adjusting for my Little Miss Sunshine conversion. The front passenger seat was thinned down to a single seat by cutting a strip out of the seat and back, to match the driver’s seat. 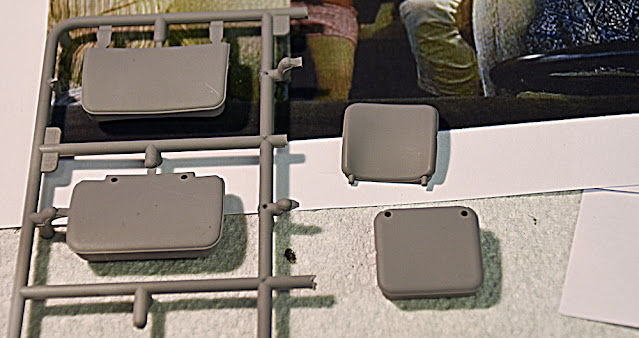 Finished model (below) looks the part in its Sunshine colour scheme. 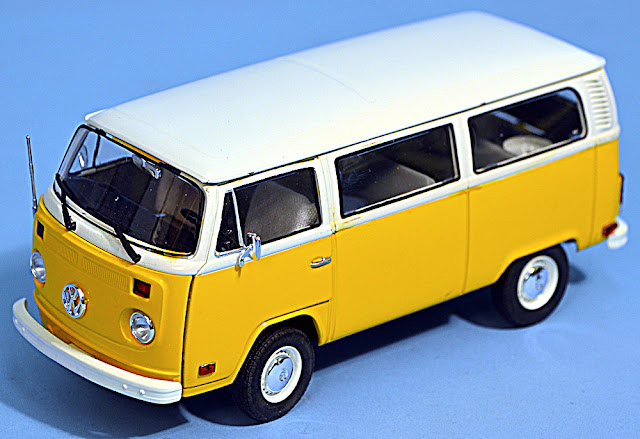 I made a correct New Mexico number plate (below) for the Little Miss Sunshine Bus by using an online plate-maker. 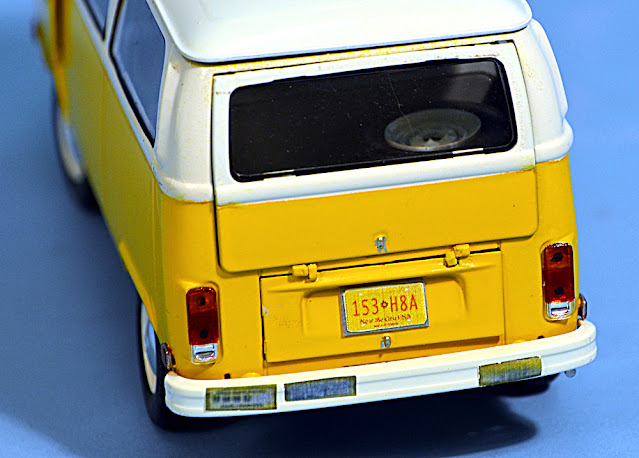 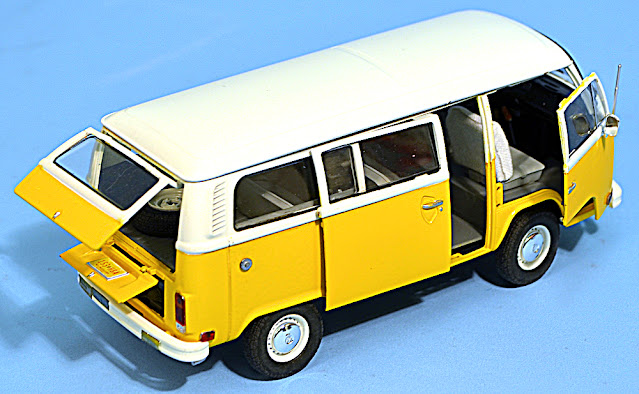 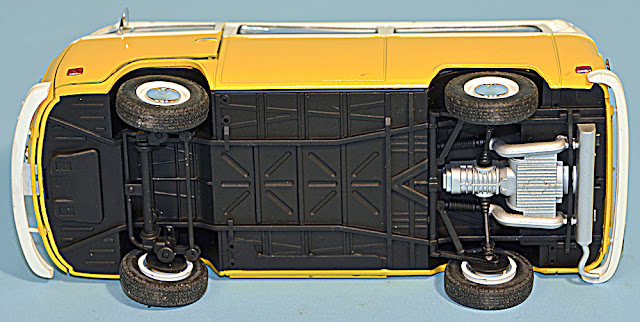 Movie poster used for the DVD edition (below). 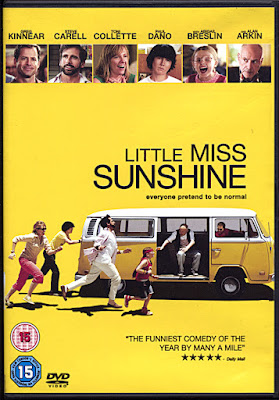 Overall, the kit makes an excellent addition to the Revell range, and completes the set of three VW Buses that ran from 1950 to 1989, when the front-engine T4 arrived. There are many Bus variations available, and a T2 camper version is already in the works.

One point of possible confusion with the VW ‘Bus/Van’ is that they are all termed the ‘Type 2’, as the VW Beetle is the ‘Type 1.’ But each incarnation of the bus/van then has its own ‘T’ designation, so, in full, this kit is the VW Type 2, T2 Bus. There is also the problem of exactly what to name it, as over the years the machine acquired various monikers such as Microbus, Transporter, Combi, Bulli, Camper, Caravelle, Samba, Clipper, Vanagon. And even, in the USA especially, the ‘Hippie Bus’!

Thanks to Revell-Germany for the sample kit