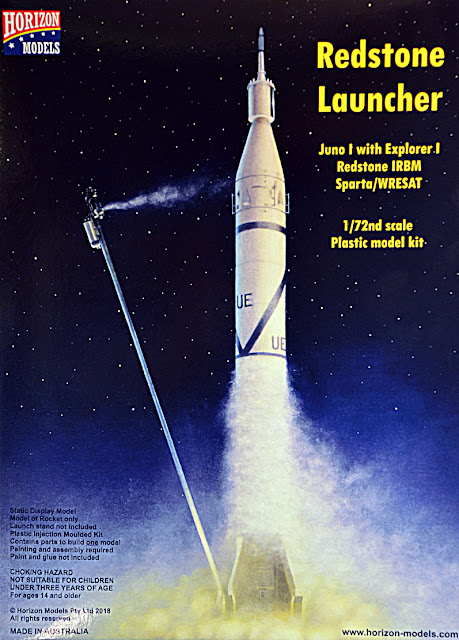 Mat Irvine: This latest Horizon Models 1:72 scale release features a Redstone launcher, which can be assembled to make any one of the following versions: Juno I with Explorer 1 satellite, US Army PGM-11 Redstone IRBM (Intermediate Range Ballistic Missile), Sparta and WRESAT (Weapons Research Establishment Satellite).

Horizon provides identical runners for most of the parts, as rockets tend to be vertically symmetrical. In some places, this can mean slight modifications to one half as against the other, such as filling in an indentation or drilling a hole. You also get some runners that are the same Horizon’s Mercury-Redstone kit, basically the lower section of the first stage, the fins and the launch pad.

The finished colours and markings differ between the four options, so you can build only one specific rocket from the kit. Unfortunately you can’t swap them around, so to build all four versions you need four kits, and then you’d also end up with a lot of parts for the spares box!

The fit of this Horizon Models kit is extremely good, and you don’t need to worry about a slight mismatch between rocket halves needing filler. If building Juno, the upper section of the first stage needs eight very small holes drilled for the four antennas. Because of their size and delicacy, these antennas are supplied as photo-etched (PE) parts, on a small sheet of very thin stainless steel. To make accurate components at this sizee would be virtually impossible with plastic injection-moulding methods. Be warned though – these PE parts are extremely thin and delicate, so you need great care in handling. You can fix them in position with tiny drops of superglue.

If you are sparing with the cement, the tub that contains stages 2 and 3 can be fixed carefully around the ‘pin’ on top of the first stage. It can then rotate, authentically reproducing the movement of the original. Incidentally, the stage was spun for stability, in effect becoming a gyroscope, so avoiding the need for extra rocket motors.

Photo-etch parts are also used to represent the four whip antennas that are attached to the Explorer 1. Thoughtfully Horizon provides two sets of these, in case of loss or damage. There is also a spare Explorer 1, so you could build a separate display model, albeit it would be extremely small. The kit’s plastic components are moulded in grey styrene, though for Juno 1 you will need to paint it white. For this, I used Humbrol sprays, with matt white as a primer, finished with a top coat of gloss white. The Humbrol spray isn’t a high-gloss, so is suitable for this model, and for similar types of rocket. Some halves of the fins, and some areas in between, need painting semi-gloss black. Exactly what needs painting does require careful cross-checking, as it’s easy to get the wrong half in the wrong colour.

The decal sheet provides the final markings. The distinctive stripes around the first stage of Juno 1 are in four parts, so need careful lining up, matching their positions to the four fins. There are also some very small decals for areas around the lower sections, though it’s down to you to decide if you are up to the somewhat fiddly task. A single decal is provided for the stripes on the nose of Explorer 1. Here you will have to use a decal softener to get this to seat correctly.

Decal softener is available online from various sources, including our colleagues at Modelling Tools.

Lastly, to clear up some confusion as to what this rocket actually was. In Explorer launcher form it was called Juno 1, even if it was mostly a Jupiter-C as the main stage and spinning ‘tub’ at the top, which were actually stages 2 and 3. The Explorer had its own motor, so was technically a fourth stage. Juno was so-named because Jupiter was a military missile, whereas Explorer 1 was a civilian science satellite. Hence Juno, who in Roman mythology was the wife of the god, Jupiter. Sparta was a three-stage rocket that launched WRESAT, Australia's first Earth satellite, in 1967.

Thanks to Tony Radosevic at Horizon Models, for the review kit.

The back of the box (below) shows three of the four versions you can build. 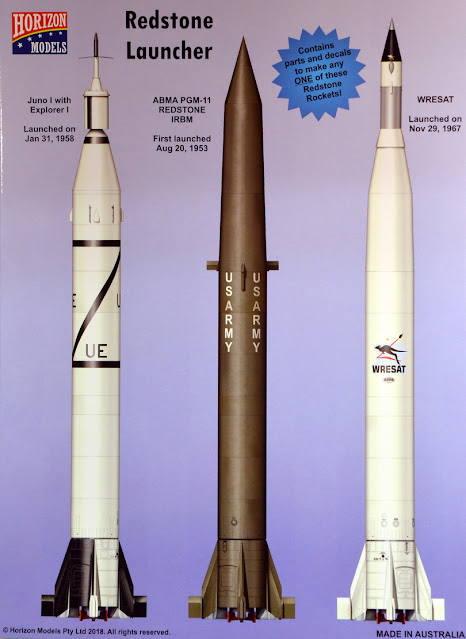 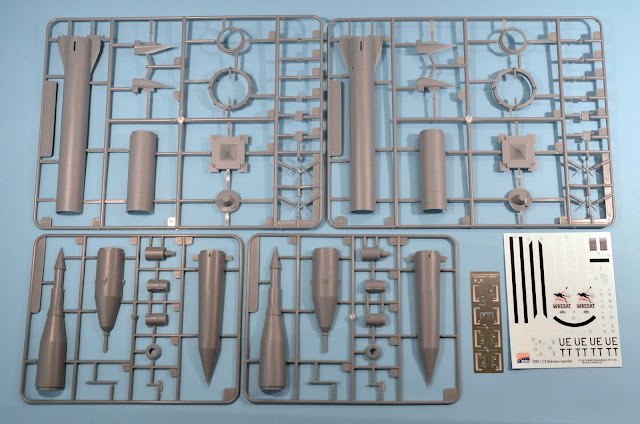 Decal sheet (below) in closeup. Stripes for the main hull are on the left, two sets of stripes for the Explorer are at top right. 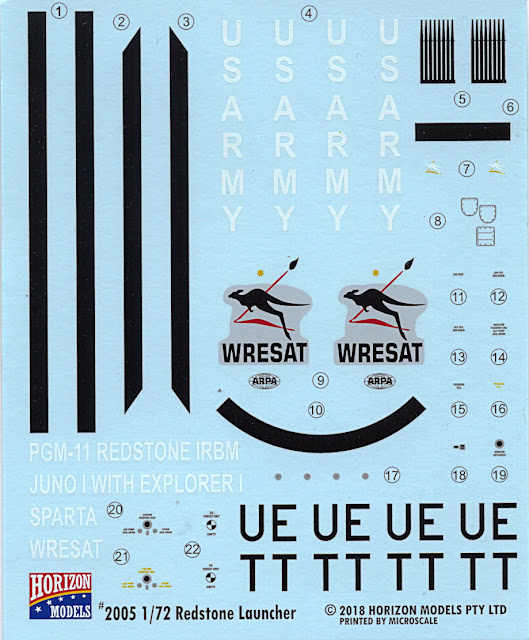 The two halves are identical, so areas need filling with putty (below) on one half only. 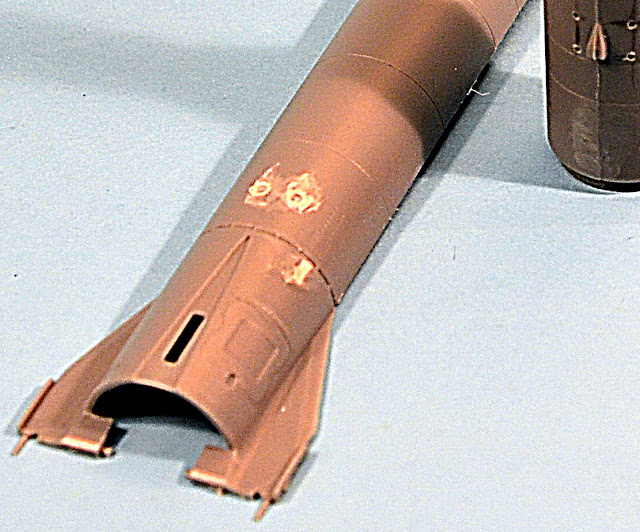 Complete model (below) on the supplied launch pad.

The engine exhaust for the first stage (below) has the steering vanes included as separate parts. However, while current display versions are blue, the actual launch vehicles were almost certainly dark green/olive drab. 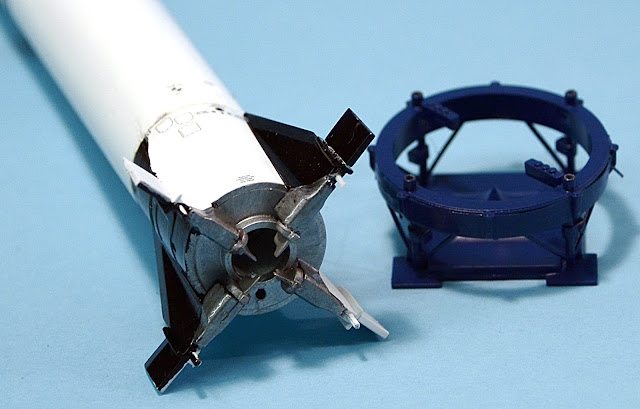 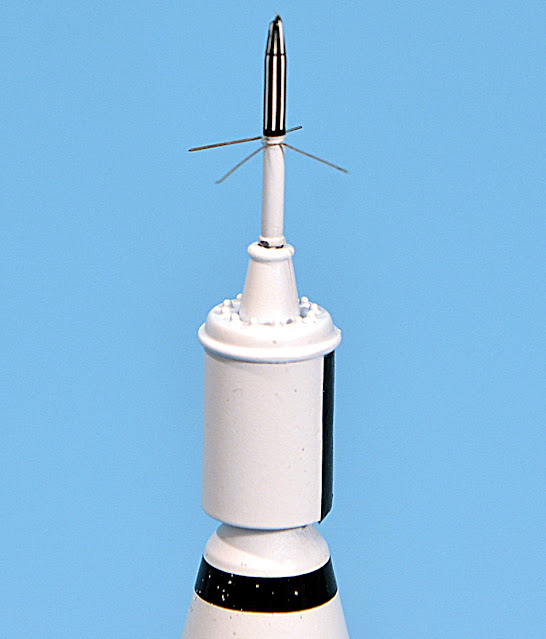 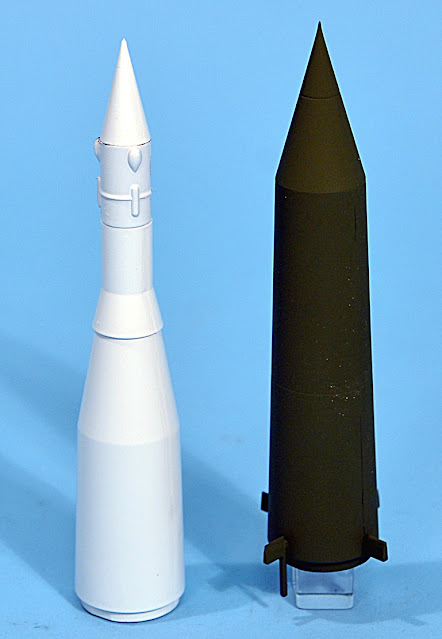 Juno 1 (below left) plus alternative upper stages for the WRESAT and Redstone IRBM. 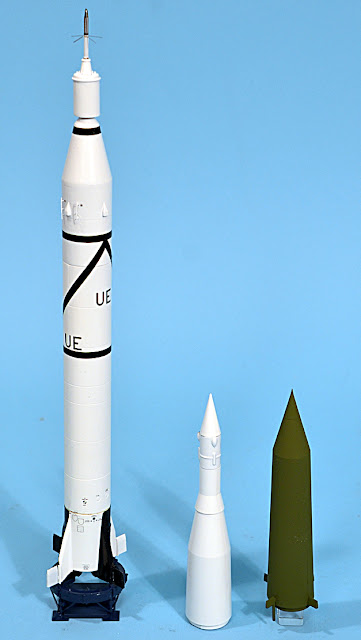