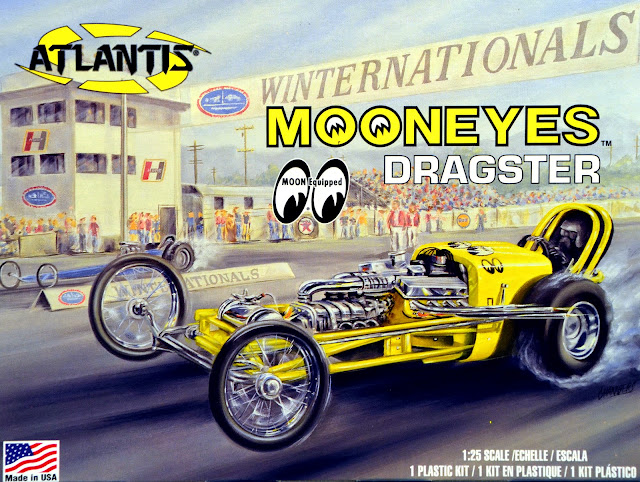 ATLANTIS MODELS CONTINUES to reissue kits from the past with this 1:25 scale Revell Mooneyes Dragster. However, it’s not quite the original Revell model. Although Atlantis has all the parts required, Revell never issued the kit in exactly this form.

Mat Irvine: The model indeed depicts the famed Mooneyes dragster, built by Dean Moon in 1961, but what Revell issued at the time was a Double Car Kit, where you could build two complete kits from the one box. This box contained the so-called sanitary bucket ‘T’ (a hot rod based on a Ford Model T) and a Mooneyes dragster. Revell never issued Mooneyes by itself, though the individual runners were issued separately in various parts boxes, you could assemble enough components to build Mooneyes individually.

This time round, Atlantis have rectified the situation by supplying half a dozen of the separate runners in one box, with brand-new box art. One runner has the engine parts, another the wheels, others the chassis and body panels. Atlantis supplies two chrome-plated runners, with others moulded in white styrene, plus a set of detailed instructions.

There is a small-block Chevrolet 283 cu in engine on one of the chromed runners. The block itself though is not chromed, instead being in a classic Mooneyes yellow. However, the front-mounted Potvin blower (supercharger), exhaust headers, rocker panels and the like, are all chromed.

Ironically, the front suspension should be chromed but is on one of the white plastic runners. However you can add that shiny finish by using Alclad chrome paint, a chrome spray, or a Molotow pen. The front wire wheels are chromed, and new-tool motorcycle tyres fit easily over the assembled wheels. At the rear, new drag slicks fit over the original wide rims. The chassis and meagre body panels are Mooneyes yellow, which Humbrol paint number 69 looks to match closely.

Finally the fuel tank, which again needs to be chrome, but the seat and steering wheel should be black. The instructions indicate that a cutaway-style steering wheel is to be used, but most photos of the actual dragster show a small traditional round wheel in place. So, as both are provided on the runners, I chose the second type. The decals include several famous Mooneyes logos.

The kit comes from several runners, so you get a lot of spare parts, in fact more spares than are required to build the car. A quick count makes a parts total of over 160, so with just 70 dedicated to the Mooneyes itself, you have nearly 100 parts available for the spares box! The kit does seem to have a few discrepancies compared to the real thing. Oddly, the seat is much larger on the real dragster, and the kit lacks a drag chute, but that was the situation with the original Revell parts.

About the Mooneyes dragster

The car was a traditional slingshot dragster design, in which the driver sits over the rear axle. However, it became one of the most famous cars of its era, primarily for the bright yellow finish and the ‘Moon’ name. Dean Moon himself died in 1987, but the company and Moon name survive under the watchful eye of Shige Suganuma, an old friend and Japanese Mooneyes distributor. The original car still exists, and is on display in the Don Garlits Museum of Drag Racing, in Ocala, Florida, though several replicas have been built over the years.

Thanks to Atlantis Models for the review kit. 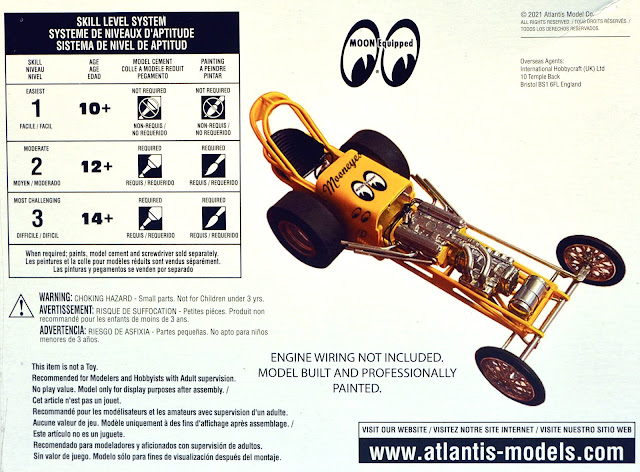 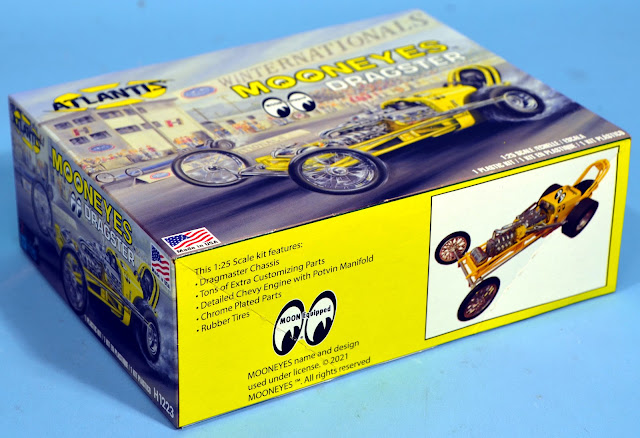 Parts layout (below) consists of basically six (or five and a half!) runners, and a set of new-tool tyres. 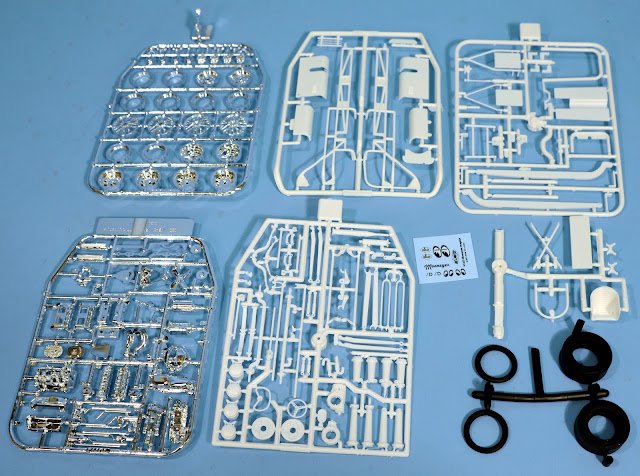 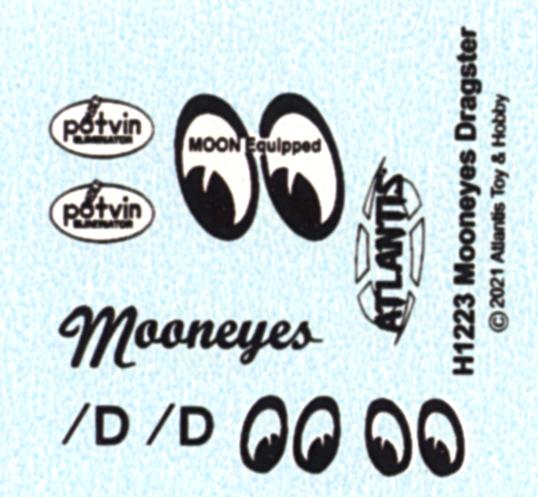 Sub-assemblies (below) show the frame plus front and rear axles, front motorcycle-style wheels, and some engine parts. 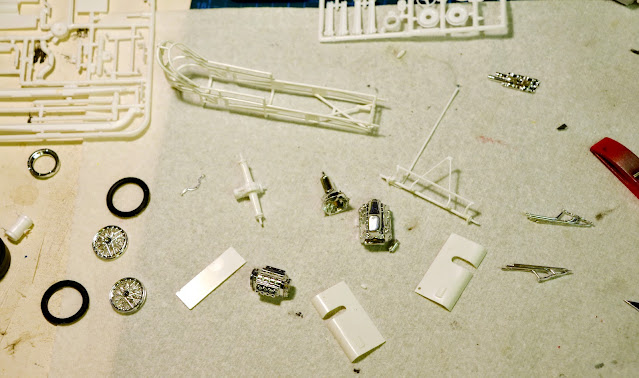 I began the painting (below) with chassis, panels and engine block in classic Mooneyes yellow. The rear axle colour is uncertain, but most quick-change rear ends ended up in either chrome or black, here I chose the latter. 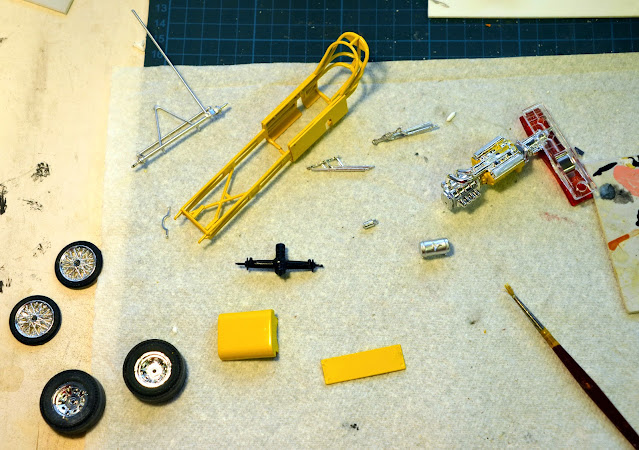 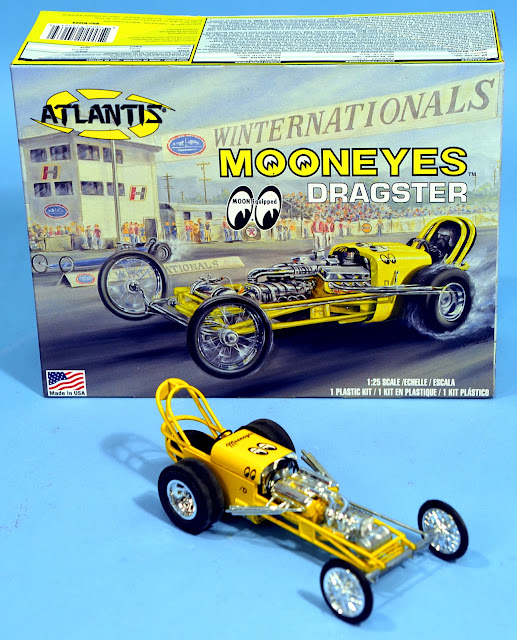 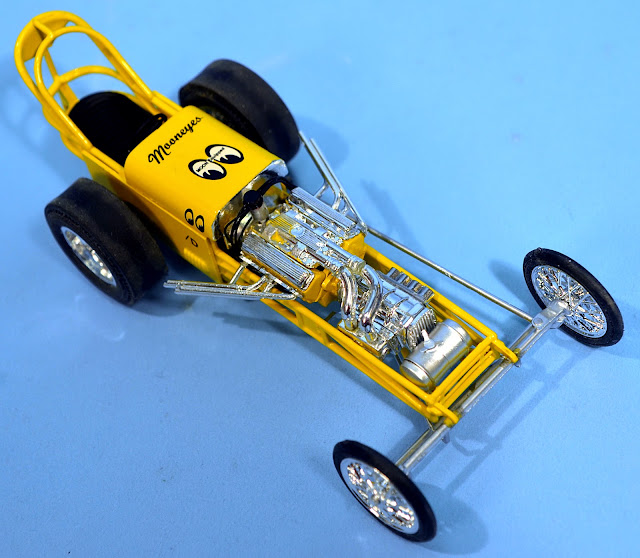 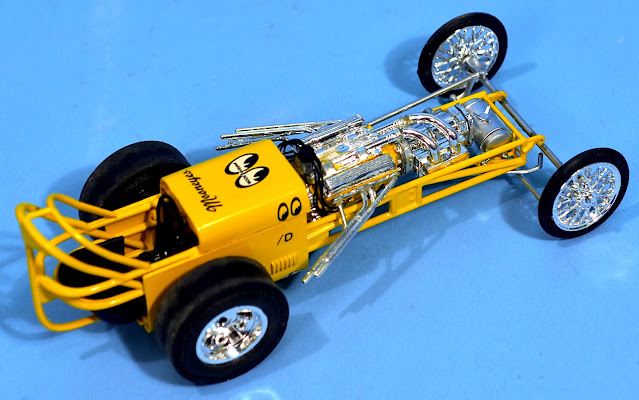 The beginnings of a drag-strip diorama (below) where I used items from the AMT Drag Strip Accessory pack and a suited figure from Miniature Autobits, a company that once produced some excellent 1:24/5 scale figures. 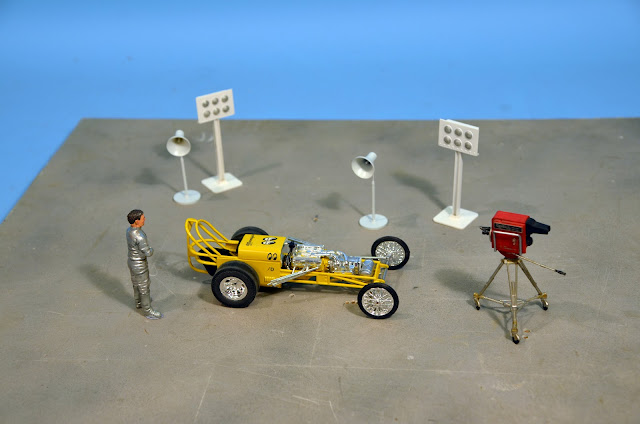 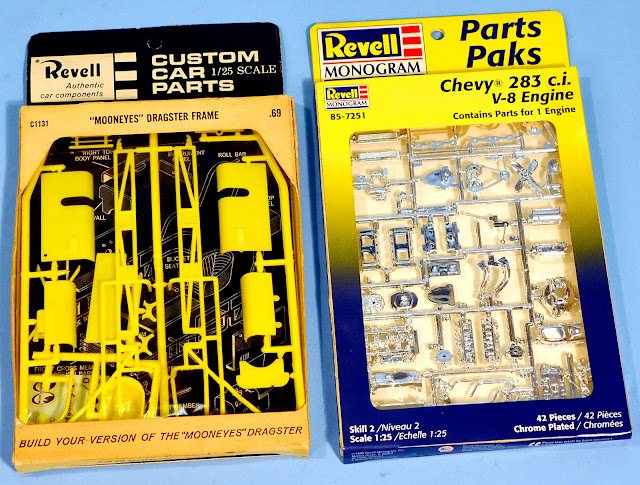 One of the original Revell Custom Car Parts packs, issued in the 1960s. This is the actual Mooneyes dragster frame, though you would need the wheels and engine sourced from other packs to complete the car. Note however you did get the decals, just visible in the bottom left hand corner.

Many parts were reissued in 1998, including the Mooneyes Chevy 283 engine. Unfortunately the Mooneyes frame was not among the reissues. 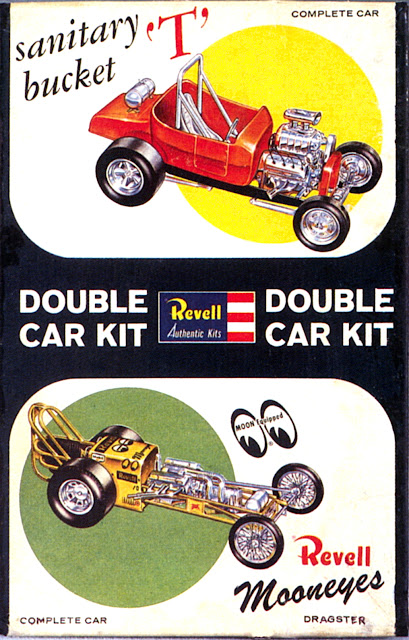 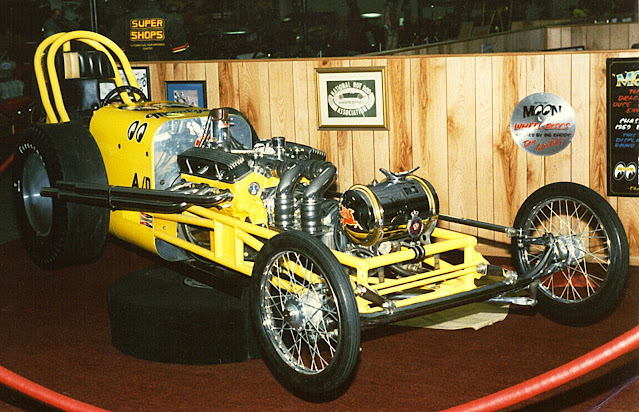 I took the picture (below) of the original Mooneyes dragster at the Don Garlits Museum of Drag Racing, Florida.