THIS IS THE LONG-AWAITED REISSUE OF an original Aurora biplane kit from Glencoe Models.
Mat Irvine: The kit was first issued by Aurora in 1956, was reissued in a virtually identical box two years later, even saw the light of day in 1960 as a 'Barnstorming' double-kit with a DH.4. But it has not been reissued since then – until now.
Glencoe CEO Nick Argento says the new kit is the result of a lot of cleaning-up work on the Aurora tooling, which was badly rusted and pitted. Nick also took the opportunity to remove engraved decal positions, a detail for young model builders that many model manufacturers included in the early years of plastic kit manufacture.
Considering its age, and the condition of the original tooling, Glencoe’s Curtiss JN-4D comes out remarkably well. There is virtually no flash, and only a couple of sink holes in the three supplied figures. This is because they are solid castings, and is a fault that can be seen even in far more recent kits.
Otherwise, the kit goes together remarkably easily. Fuselage halves need instrument panels and seats fitted first, though the latter could be left until later in the build. The single pilot, who typically sat in the back seat, might need his legs ‘modified’ to get him seated correctly, but the tailplane and fin slot in easily, as does the lower wing. The engine components are the propeller, fitted via a pin through the radiator, and two exhaust banks, which can be among the last parts to be fitted. Many Jennys were seen with open wire wheels, but the ones in this kit are closed in, which looks neater and is easier to paint.
The only slightly tricky part of construction is fitting the top wing to the forest of struts, though this is a common issue with biplane kits. I found the easiest method was to complete most of the painting (you could even apply the decals) then fit the lower wing in place, followed by adding the maze of struts. Leaving the glue on these to nearly set solid (you need slight flexibility), turn the upper wing upside-down, apply a dot of cement in each of the dozen holes. Then it is a matter of positioning the struts carefully into their corresponding holes, a job for which steady hands and a pair of tweezers helps. When they are all in place, leave until the glue dries thoroughly, then the assembly becomes remarkably rigid, even for a 1:48 scale plastic biplane.
The actual colours of original Jennys can be a matter of debate. They were often depicted in yellow – as is the box-art for the Aurora issue – but this more likely comes from the original doped finish. But of course contemporary photographs are all black and white (colour photography did exist, but its usage was rare), so a lot is supposition based on written reports.   However, CA Owers in the Curtiss Jenny Windsock Datafile says: “The original scheme of the military Jenny was clear-doped fabric with metal panels painted in khaki.  The clear dope usually had a yellow tinge. Late wartime contracts were finished in khaki overall upper surfaces and lower surfaces left in clear-dope finish. Post-war, the (US) Army adopted orange-yellow wing surfaces with khaki fuselages.” The Glencoe aircraft was probably the ‘clear-doped fabric’ finish, which appears as a light tan. I used Humbrol Desert Tan 237, and Humbrol Olive Drab 155 for the nose section.
The kit includes a single pilot, plus two ground crew and a small base with built-in chocks. It’s an ideal kit for a somewhat larger diorama-style setting, which can include the supplied base if you wish.
About the Jenny
The Curtiss JN-4 ‘Jenny’ (the nickname came from its designation) first flew in 1914. It was a two-seater and became the mainstay US trainer aircraft during World War I, After that, thousands of war-surplus machines were sold cheaply into the civilian market, where pilots often took them to county shows, venues which allowed many Americans to see an aircraft for the first time.
The Jenny became particularly famous for barnstorming routines, in which pilots and planes would perform stunts in front of cheering audiences. These could involve loops, dives, even wing-walking. There was also a display where a performer climbed from a moving car, up a ladder, and into a Jenny cockpit.
Marking schemes
The decals with this Glencoe model are for three American aircraft, one of which is the ASMS or the Air Services Mechanics School. This aircraft flew out of Kelly Field, Texas, as depicted on the kit box. There are also markings for a version flown by Argentine Army Aviation, which used pale blue roundels for identification.
The next issue of this Glencoe kit will feature barnstorming machines, with decals for the bright-red machine flown by American aviator Earl Daugherty, and for Lillian Boyer, one of the first women barnstormers. This release is scheduled for later in 2022.
Scale stats
Glencoe Models: Curtiss JN-4D ‘Jenny’
Scale: 1:48
Parts: 45
Assembled wingspan: 280 mm (11 in)
Manufacturer’s ref: 05119
www.glencoemodels.com
My usual disclaimer is that I am Glencoe’s webmaster, but that’s about the closest I get to being involved in the company’s kits.
Neatly-moulded components laid out (below). 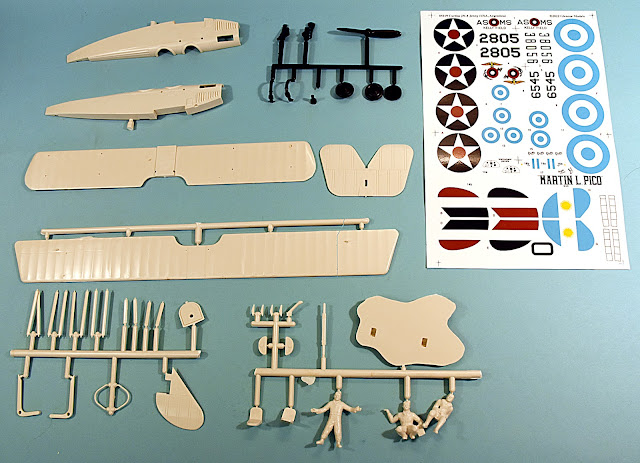 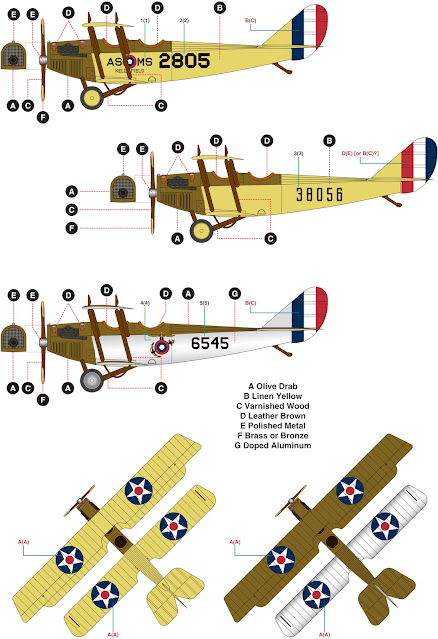 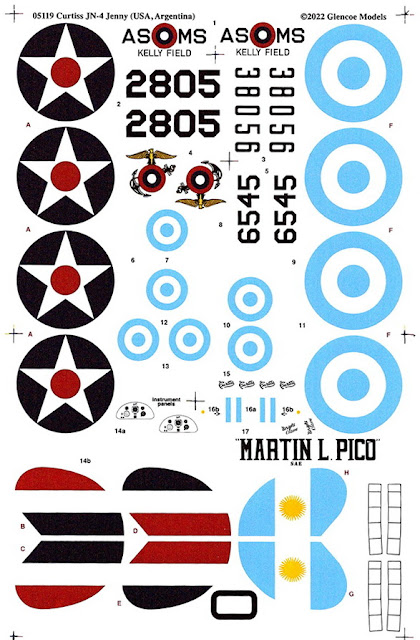 The finished Jenny (below) placed on a simple diorama base. 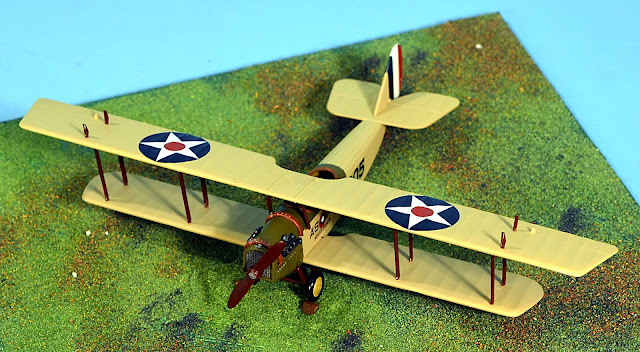 Note the various interplane struts (pictures above, below) plus another four above the top wing. 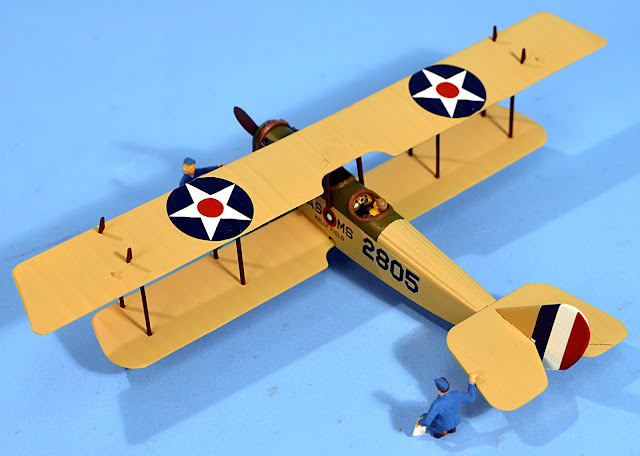 Early US roundels (above, below) add a splash of colour to the overall scheme. 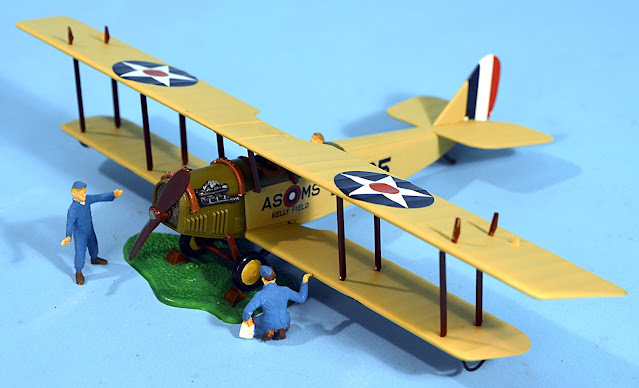 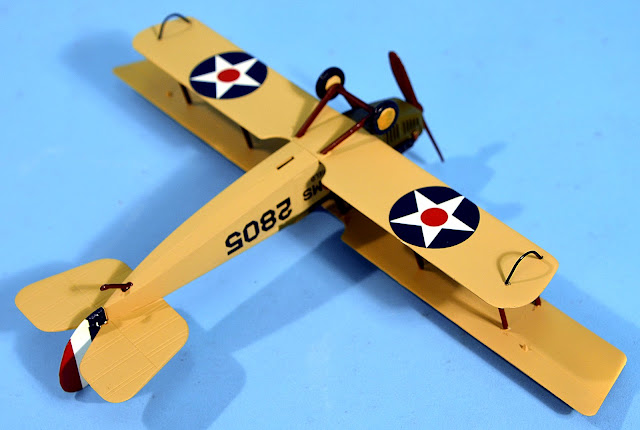 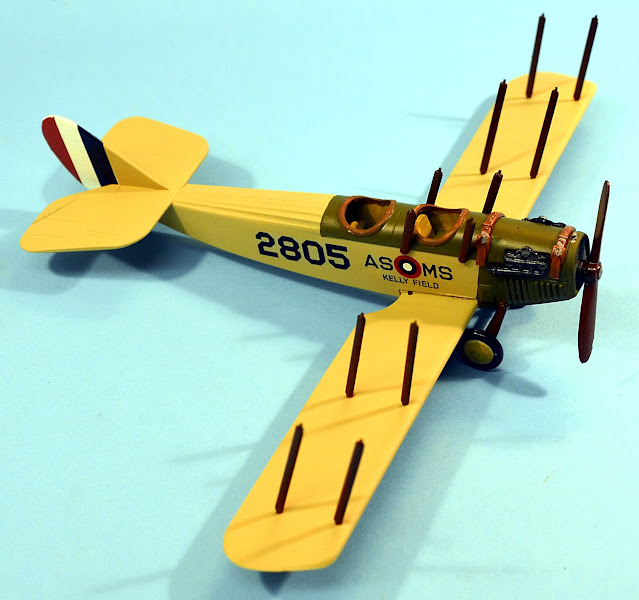 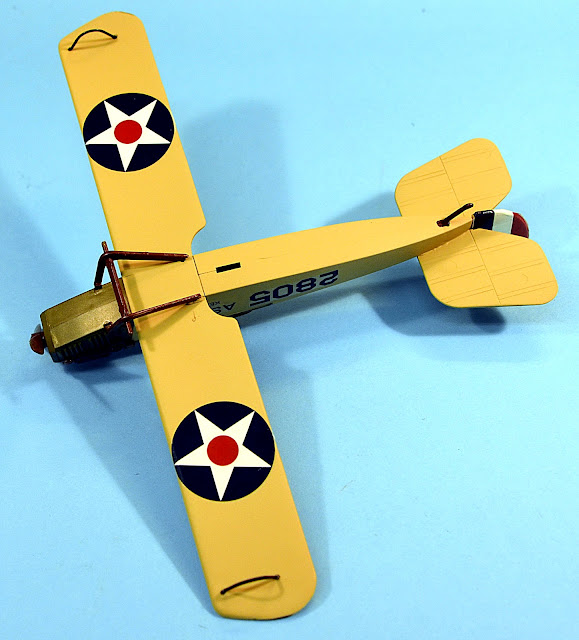 Instrument panels (below) add to the overall realism. 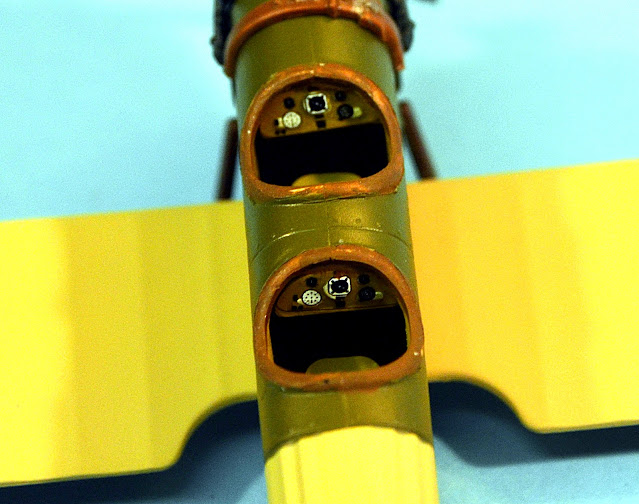 If you apply the box-art finish, first paint the main colour, then mask off (I used Tamiya tape, below) and spray on colour around the nose. 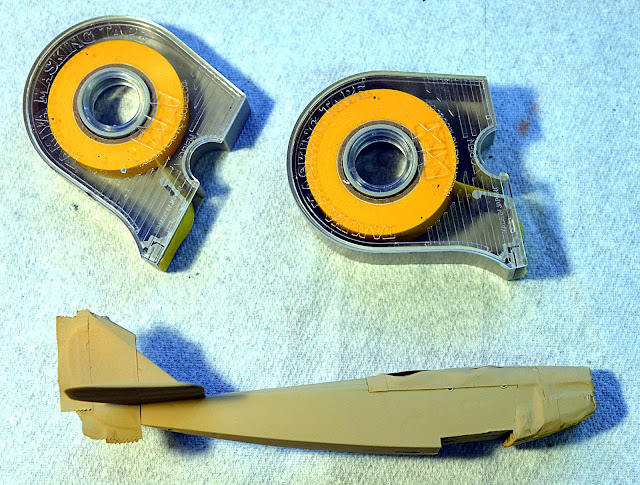 Painting (below) that will be used for the upcoming barnstormer release. 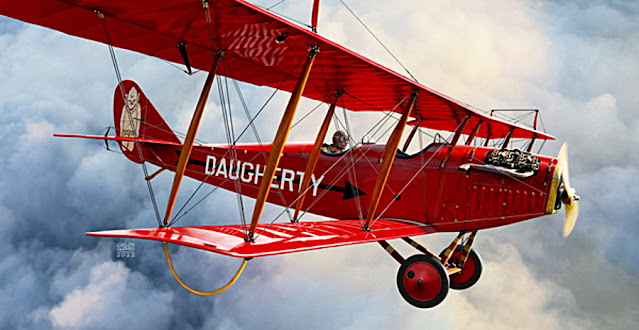