THE BAT TAKES FLIGHT WITH THIS POLAR LIGHTS BATPLANE KIT

EVERY NOW AND THEN you look at your unbuilt-kit collection and pick one that may not be brand new, but still could do with being changed from a box of components to a finished model. Which was the situation I faced with this Polar Lights Batplane kit.

Mat Irvine: This is a Polar Lights reissue of the original Aurora Batplane, a kit that dates back to the 1960s. Except that, while the kit is a re-tooling of the Aurora original, and while the two kits layouts match, the Polar Lights parts are from a newer mould.

But it remains a simple kit, with a one-piece cockpit interior that features the busts of Batman and Robin. It also has two-piece wings, one-piece tailplanes and a very simplified landing gear assembly. If you want to spray finish the completed craft, it’s best to paint the interior first. You can get in quite a lot of detail with what is after all a single moulding. You can then fit in the fuselage halves, attach the canopy and mask it off, which will allow an oversprayed paint finish.

The overall colour is ‘Batblack’ (though more of that later), and there is a ‘Batmask’ logo on the nose, that ideally need picking out separately with yellow eyes added. This isn’t mentioned in the instructions, but does show up on the box art. Colours for the undercarriage legs, nose probe and jet exhaust are listed as silver, though I painted them in bronze, as I reckon it looks better.

Unlike other original Aurora Batcraft, such as the Batmobile, Bat Cycle and Bat Boat, the Batplane wasn’t from the Adam West/Burt Ward TV series, instead being based on the earlier comics. In these, colours were not sacrosanct and could change from story to story. In fact, the external colour of the plane may more correctly be in a dark-blue finish, and comic-book Batmobiles were usually just that, rather than pure black.

Finally the Bat logo decals can be applied to the fin and wings. Then the finished Batplane can be attached to the classic Aurora-style stand.

The kit is not included in the current Polar Lights catalogue, but there are many available on eBay.

Completed Batplane (below). You can pick out some details on the 1:60 scale Batman and Robin figures under the canopy. 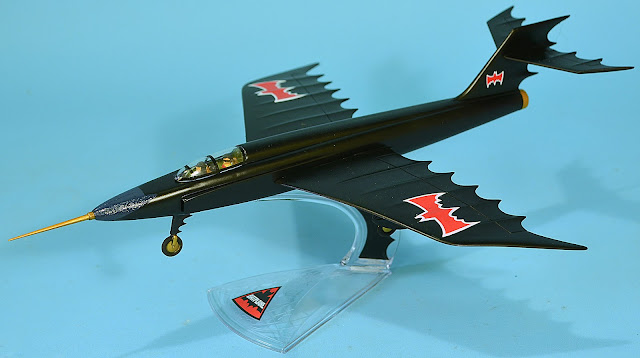 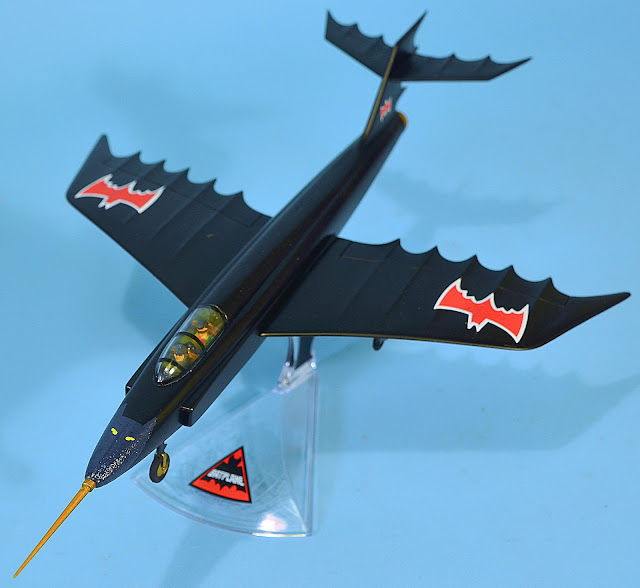 Comparison of the Polar Lights fuselage half (below, upper) compared with the Aurora original. Subtle differences include a locating slot for the new kit’s one-piece interior.

Parts layout (below) with included clear stand and decal sheet. 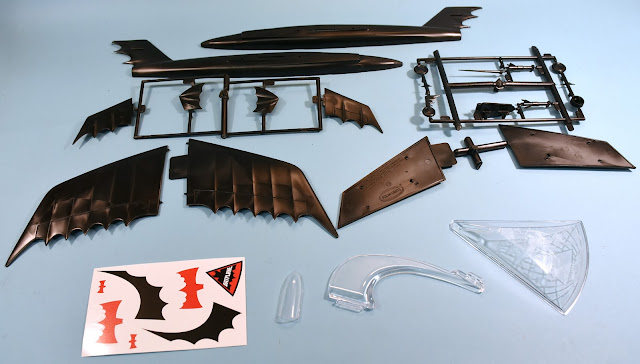 The Aurora box (below, upper) compared with the Polar Lights version. Besides some additional text on the latter, they are more or less identical. 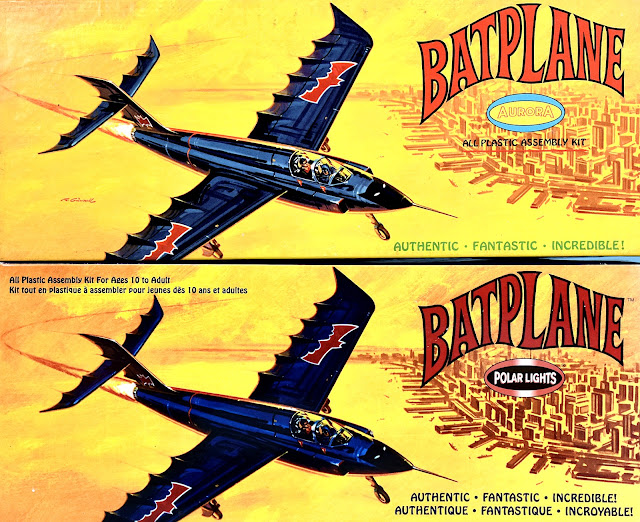 Old and new boxes (below) are the same overall size, though the Polar Lights version is slightly deeper.

What was not to be (below). This is one of the very few images of the proposed Aurora Batcopter, a design based on the bubble-canopy Bell Model 47. Unfortunately the model became badly mis-shaped, as it was made of warp-prone acetate, and is known to have been destroyed. 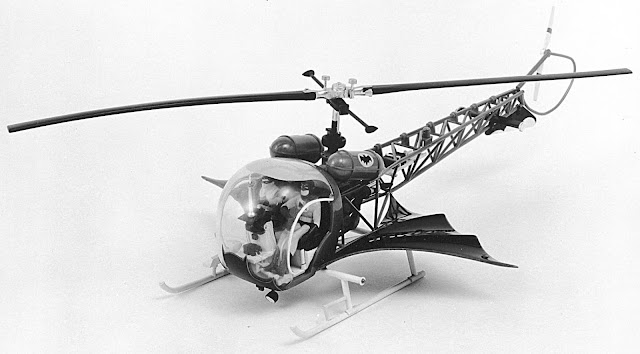